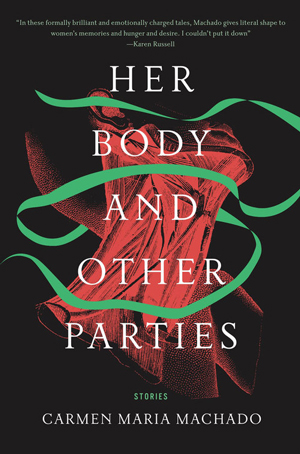 HER BODIES AND OTHER PARTIES
by Carmen Maria Machado
Graywolf Press, 245 pages
reviewed by Rosie Huf

For those of us still traumatized by the 2016 Presidential election, the debut novel Her Body and Other Parties, by Carmen Maria Machado, is the emotional and intellectual release for which we have been waiting. It is electric with the #Resist spirit. It underscores the importance of the #MeToo movement. And, it tackles issues such as gender, language, and human interaction through a fresh, folkloric perspective. Winner of the Bard Fiction Prize and finalist for the National Book Award for Fiction, the Kirkus Prize, and the National Book Critics Circle’s John Leonard Prize, this collection of ten short stories is timeless, yet also a necessary way to transition from 2017 to 2018.

A graduate of the Iowa Writers’ Workshop with an MFA in fiction, and current Writer in Residence at the University of Pennsylvania, Carmen Maria Machado has a deft hand at spinning culturally relative, purpose-driven narrative. Into each short story she’s woven elements of pop culture, feminist social criticism, literary fiction, and magical realism, varying each in measure. Threads of influence from authors such as Mary Wollstonecraft, Virginia Woolf, Zora Neale Hurston, even a little Andrea Dworkin strengthen Machado’s overarching theme, which is a clear call for renewed efforts toward female liberation: Liberation for women to genuinely desire and enjoy sexual gratification without fear or stigma; liberation to be an individual with thoughts and actions and intimate moments separate from her spouse or lover; and liberation to exist creatively outside the stereotypical confines of the male perspective.

Three stories in particular exemplify Machado’s literary skill as well as her commitment to furthering discussion on feminist and social issues: “The Husband Stitch,” “Especially Heinous,” and “Real Women Have Bodies.”

“The Husband Stitch” paints the portrait of a woman whose head is being held to her body by the grace of a single green ribbon. She is nameless and frequently recounts folktales she heard as a girl that run parallel to her own life’s journey. The paradox of her situation is that although she fulfills every wifely duty expected of her by her husband, society, and cultural tradition—from performing as the insatiable, sexual nymph most men desire to bearing a son her body could barely hold—it is still not enough for him. Everything that belongs to her belongs to him.

That night, after my son is in bed, my husband reaches his hand across the couch and slides it up my leg.

“Come to me,” he says, and I twinge with pleasure. I slide off the couch, smoothing my skirt very prettily as I shuffle over to him on my knees. I kiss his leg, running my hand up to his belt, tugging him from his bonds before swallowing him whole. He runs his hands through my hair, stroking my head, groaning and pressing into me. And I don’t realize that his hand is sliding down the back of my neck until he is trying to loop his fingers through the ribbon. I gasp and pull away quickly, falling back and frantically checking my bow […]

He is silent for a long minute, then “A wife should have no secrets.”

My nose grows hot. I do not want to cry. “I’ve given you everything you have ever asked for,” I say. “Am I not allowed this one thing?”

For him to feel loved, as if she is truly bound to him, he must possess all aspects of her being. This is the tale told by grandmothers to granddaughters over boiling pots in a kitchen: beware of people who take pleasure in the complete consumption of others.

In “Especially Heinous,” basically a collection within a collection, Machado has strategically crafted micro-narratives from the ascending episode titles of Law and Order: SUV. There is one story for every episode of SUV’s first twelve seasons. This piece is laden with pop-culture allusions and nods to feminist theory. It is particularly reminiscent, tangentially, of Dworkin’s essay, “I Want a Twenty-Four Hour Truce During Which There is No Rape.” In truth, many parts of this collection seem like a nod to Dworkin’s essay. Machado describes the episode “Vulnerable”:

For three days in a row, there is not a single victim in the entire precinct. No rapes. No murders. No kidnappings. No child pornography made, bought, or sold. No molestations. No sexual assaults. No sexual harassments. No forced prostitution. No human trafficking. No subway gropings. No incest. No indecent exposures. No stalking. Not even an unwanted dirty phone call. Then, in the gloaming of a Wednesday, a man wolf-whistles at a woman on her way to an AA meeting. The whole city releases its long-held breath, and everything returns to normal.

And then, describing the episode “Screwed”:

The DA calls in sick, again. “The sixty-fifth story,” Benson whispers into her ear, “is about a world that watches you and me and everyone. Watches our suffering like it’s a game. Can’t stop. Can’t tear themselves away. If they could stop, we could stop, but they won’t, so we can’t.”

The story speaks to the thesis that were viewers not consumed with violent content, not conditioned to accept violence and aggression as bi-products of humanity’s existence, we would possibly have a better chance at eradicating rape, murder, human trafficking, etc. We should be cognizant, Machado warns through her micro-narratives, of our actions, or lack thereof, which cultivate and sustain the suffering of others.

Later in the collection, with visions of disappearing women, “Real Women have Bodies” touches on the detrimental effects of miseducation on female existence. 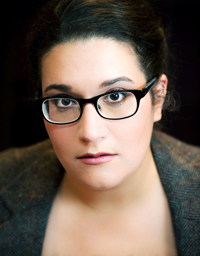 The narrator, again nameless, works at Glam, a special occasion dress shop owned by an older woman named Gizzy. The store sells all types gowns, ranging in price and design, but the most popular ones come with a secret. Folded into the fabric of highly sought after dresses, unseen by the unobservant patrons, are remains of the disappearing women. “The women started showing up a few years ago—they just fold themselves into the needlework, like it was what they wanted,” Petra, the daughter of the seamstress tells Machado’s narrator.

The narrator asks, “Did you try to tell Gizzy?”

To which Petra responds, “Of Course. But she said that as long as they sought us out, it was all right. And those dresses do so well—they sell more than any my mother has ever made before. It’s like people want them like that, even if they don’t realize it.”

While later contemplating the problem of these disappearing women, the narrator watches a mother admonish her young daughter for wanting a pretzel because “Pretzels are junk food. They will make you fat.” Another night she watches the evening news, where “pundits point fingers at each other, screaming as the cohost between them shimmers and wavers under studio lights. They are talking about how [they] can’t trust faded women […then] the woman blinks away mid-broadcast, a microphone tumbling to the floor. The camera scrambles to look away.” By the end of this story, the narrator concludes, “None of us will make it to the end.”

Outside the pages of this collection, young girls, well under the age of 18, take to the internet daily asking strangers to rank their hotness. Teens commit suicide because of shaming. The fashion industry Photoshops models and suffocates readers with unattainable beauty standards; they propagate mindsets that excuse fatal eating habits. And powerful men silence women because our voices are not conducive to their happy endings. Fiction mirrors reality, and this piece of fiction questions, “What are we doing to our women?”

Through ten separate yet tangentially themed stories, Machado’s female protagonists struggle to fill internal voids that inevitably lead to their self-destruction. By the end of each piece, the reader is left questioning to what extent the narrator lives by her own sense of agency; and, to what extent is she merely acting in reaction to the experiences put upon her by family, friends, acquaintances, and social expectation.

Over the course of several centuries, women have been speaking plainly and boldly about the treatment of their gender by society. Yet even through the clearest, most succinct rhetoric, their points were only half heard. So Carmen Maria Machado has, it would seem, chosen to continue their efforts via a more inventive, striking method of narrative. Her Body and Other Parties leaves readers raw from self-reflection and spikes of unexpected but due emotion. Yet it is a relief to respond so sharply to Machado’s collection, rather than misguided presidential tweets, or discussions of our failing, democratic system.

Rosie Huf is the Senior Editor of Cleaver Magazine’s Life As Activism feature and manages the Editors’ Blog. Recently, she received her Master of Liberal Studies degree from Arizona State University, the concentration in Nonfiction and Publishing. She has had several interviews published in Superstition Review and has a forthcoming nonfiction piece in Sundog Lit.