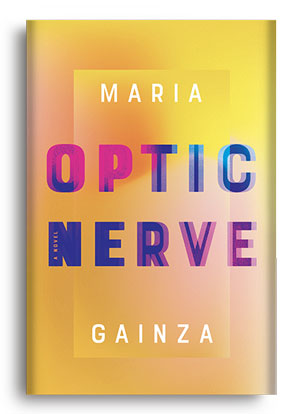 Our bodies are both the fundament and the fundamental threat to our experience of the world. For artists and art lovers, this corporeality more often induces terror than acceptance: cancer’s ghostly invocations in Judith Kitchen’s The Circus Train, retrograde amnesia’s ever-recurring retractions in Christopher Nolan’s Memento, visceral depictions of the mythological in Goya’s Black Paintings. The referentiality of invoking such a list is what Argentinian art critic María Gainza reflects upon in her debut novel, Optic Nerve.

Written from the perspective of an unnamed Argentinian art critic, Optic Nerve flits from her present to her childhood memories, to her culture’s memories, in order to develop a lineage between self and cultural artifacts, become an optic nerve transmitting information from the external to the internal. The most representative instance of this transmission takes the form of a historical moment remembered by the narrator: while Señora Alvear, “once upon a time the famous soprano Regina Pacini,” sits at her dinner table beneath a painting by French animal painter Alfred de Dreux, “her eye travels back and forth constantly between the deer in the picture, still alive, and the other one, dead and served to them in lean cuts.” Optic Nerve spends much of its time traveling back and forth like this.

This semi-flux state is built into the novel’s architecture. The narrator’s present tense gives way to her past tense gives way to a historical artist’s past (including the aforementioned Alfred de Dreux, among others). First-person gives way to second-person gives way to third-person. A few pages in, one might feel trapped in quicksand. A meditation on how Courbet’s The Stormy Sea is the visual equivalent of Marcus Aurelius’ saying, “Let the universe decide,” becomes the narrator reminiscing about watching Point Blank (described, never named) late at night with its final shot echoing Courbet’s waves “thick as milk.” 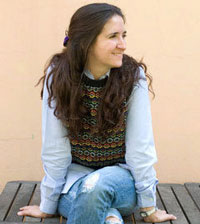 In her impulse for nesting thoughts, to move away from the present world while trapped in a mirror-like compulsion to reflect, there’s something Kafkaesque about it. A world in which the very act of struggling against the unknown strengthens its hold on you. Quicksand. One might find Josef K beside Optic Nerve’s narrator in the Museo Nacional de Bellas Artes. That her struggle-thoughts are connected to her experiences with the associated art pieces and their histories, leading one to realize the narrator herself is like a modern Señora Alvear. Fitting, since it leads one to fellow Argentinian Jose Luis Borges’ famous phrase from “Kafka and His Precursors” as well: “The fact is that every writer creates his own precursors.”

Despite what all this might suggest, Gainza rarely exceeds descriptive materiality. Be it her reporter’s tone or Courbet’s waves; what is visibly present is everything there is. Even as she ventures into metaphor, her language remains marked by the physical. Remarkably, it’s through metaphorical confusion that this comes across best. The unnamed narrator says of the two stone lions at the entrance of the National Museum of History in America, “I felt they could watch a person be impaled and still show no emotion.” This, of course, is illogical. Stone doesn’t feel. Yet the brutal bodiness of impaling exposes how compulsive this imaginative reflection has become, making golems of the stone lions.

It’s unclear if this intentional or translational, although the clarity of Thomas Bunstead’s translations of Enrique Vila-Matas’ A Brief History of Portable Literature and Juan Villoro’s God Is Round suggest it is a quirk in María Gainza’s writing. In another off-putting, physicalizing metaphor, the narrator compares herself to “a climbing out of an excavation” that finds “the final trio of bones” she has needed to piece together “the creature.” This ambiguity serves to strengthen the overall impression that’s central to the novel’s context, hence its shape: art can only be understood through context, through each person’s precursors. It is, one might say, in the eye of the beholder, which is where the haunting begins.

History—personal, historical, cultural, economic—haunts the body. The weight of the Kafkaesque can only be explained as hauntological, as what British cultural theorist Mark Fisher describes as “the debts to the past, the failure of the future.” This is most explicit in Optic Nerve’s depiction of the painter Hubert Robert who, searching for “real ruins,” ended up unmasking “a society that no longer saw itself living in a time of continuity, but rather a time of contingency.” Bracketing this meditation on Hubert Robert’s meditation is the story of the narrator’s mother’s mania: her compulsion to retreat to her grandmother’s house, her hoarding of seven sofas and “Sotheby’s catalogues dating back to 1972,” and “a lifelong obsession…to disseminate the ‘correct’ history of our country.”

Due to its colonial history, Argentina becomes such a site of contingency as Hubert Robert painted. All that’s left to the deteriorating body politic and the physical body is the preservation of a “correct’ history” of shared pasts, artists, and experiences such as Optic Nerve puts together. A history that tries to remember that grandmother’s house is just that, and not the US Embassy it had become by the narrator’s time. When we learn that Señora Alvear’s saccades to and from Alfred de Dreux’s painting is the ancestral history of our narrator, it highlights the walled perimeters of her world.

And as there is no fluidity between walls and the outside world, except the faint rains of recollection, the novel is ultimately claustrophobic. An initial comparison might be Ernest Sabato’s The Tunnel wherein Castel, the murderous painter-narrator, details his life and failed love from the confines of prison and his tunneled mind. Yet Optic Nerve is less hopeful. Castel knew his smallness, saw the walls. The closest analog would be Teju Cole’s Open City wherein Julius, a peripatetic psychiatric fellow, wanders freely the “palimpsest…written, erased, rewritten” of New York collecting various stories only to discover he’d erased his own. The absence of clear boundaries is a false freedom from the past, in the same way rain inevitably floods the reader and Gainza’s narrator.

And that Open City and Optic Nerve’s narrator are flaneurs is vital: they wander as one would look in a mirror, piecing themselves together and the world. When she’s diagnosed with thymus cancer, the Argentine critic considers how “for two years I’d had the sense that something was wrong inside me.” What compelled her against consulting a doctor? She ignored brokenness, didn’t see her walls. One has the sense that these are, instead of flaneurs, the ghost of flaneurs. The haunting of “a society that no longer saw itself living in a time of continuity, but rather a time of contingency.”

Whereas Sabato’s madman is passionately possessed, the clear-eyed wanderers merely become the ghost of their own haunting. Such is the horrible strength of a novel like Optic Nerve. It’s deficiencies—its clash of metaphor and physical, its jarring mix of domestic narrative and art criticism—don’t obscure its purpose. When the narrator visits the ophthalmologist for the first time, she attempts to use the seeing eye chart exactly eighteen inches away, as that was what “Rothko claimed was the optimal distance from which to view his work.” She transforms the eye chart into a painting, transforms her health into an aesthetic experience. She is trapped in the mansion of her mind, looking between the painted deer and a deer’s lean cuts. Later she looks at a Rothko poster in his office and feels “a clear sense of the brutal solitude of this slab of sweating flesh that is me.”

Fittingly, she had told the doctor that she was going to have an eye operation as a kid but was a “bundle of nerves.” Trapped in such “sweating flesh,” haunted by past debts and future foreclosure, the novel ends with the narrator quoting Jules Renard: “How monotonous snow would be if God had not created crows.” At this she feels “poetic joy,” but forgets its referent, as if a ghost, unable to escape herself.

Justin Goodman earned his B.A. in Literature from SUNY Purchase. His writing–published, among other places, in Cleaver Magazine, TwoCities Review, and Prairie Schooner–is accessible from justindgoodman.com. His chapbook, The True Final Apocalypse, is forthcoming from Local Gems.