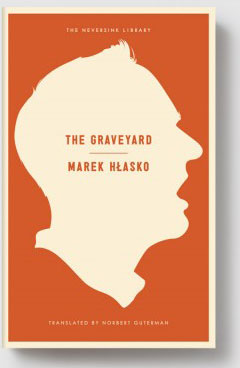 The moment of truth in this book of deceit is treated in a most unusual way: it isn’t treated at all. Or more precisely: it isn’t even needed. The consequences for Franciszek Kowalski, the protagonist of Marek Hłasko’s unforgettable 1956 novel The Graveyard, indeed for all of humanity, are damning enough.

Slender Citizen Kowalski had fought bravely in the underground in 1945; after receiving a nearly fatal chest wound, his faith in international socialism had willed him to live. Now, at 48, the sober Kowalski is a proud Communist Party member and a factory manager in a Polish city. One night, he runs into a comrade he hasn’t seen in years. The old fighters set off to a bar to reminisce, and despite himself Kowalski gets drunk. On his way home early the next morning, Kowlalski inadvertently insults two young police officers, and without explanation they have him locked up for the night.

The earnest Kowalski can’t understand what’s happening. “Under arrest?” he asks. “What for?”

“No,” Franciszek said resolutely. He came close to the railing and put his hands on it. “I do not know. I remember that I somehow flew off the handle, but it seems to me that’s no good reason for keeping me locked up all night.”

“No good reason?” the sergeant drawled. “And what about the things you shouted? Don’t you remember what you shouted?”

The three of them stared at him, and Franciszek suddenly shriveled…“No,” Franciszek said after a while. He passed his hand over his forehead. “I don’t remember.”

Franciszek shrivels and you, reader, shiver. “It’s those words we’re interested in,” says the sergeant. Kowalski has entered level one of totalitarian hell. Outrage is followed by remorse, self-approbation, despair, and bewilderment. “Each one of us imagines he didn’t do anything,” a stranger tells Kowalski, in the drunk tank. “Each one of us somehow thinks he is innocent.”

Hłasko, who was forced to publish The Graveyard and other works while in exile (his books were banned by the Polish government), was masterful in revealing the levers of psychological manipulation at work in a totalitarian society. By the next day, Kowalski is convinced of his guilt. No longer worthy of his membership in the Party, he decides he must prostrate himself before his factory’s Party tribunal. This will be his moment of truth, a chance to cleanse himself and rebuild his standing. But what is this tribunal? An inane and arbitrary body, a farce.

Now stripped of his Party membership, Kowalski finds himself on the relentlessly gray, rain beaten streets of the city. “He raised his head and breathed in the air with all his strength,” says Hłasko;

there was a lump of steel in his lungs. He walked on, occasionally stumbling; he stared at the sky—it was better, easier this way. An insipid moon was drifting over the roofs; the darkness grew thicker and thicker, a clammy, impenetrable darkness which choked the sickly stars and he crowded city. A military patrol tramped by, the heels clattering. The moon suddenly dropped out of sight behind a dirty cloud; the soldiers walked ahead, staring apprehensively into the damp darkness.

Kowalski walks on—into the graveyard that was his faith in communism, his faith in humanity. He seeks out his comrades from the underground. They’ll vouch for him, he thinks, but one after the other has been destroyed by the “fear you’ve got to live with, constantly, without interruption, from morning until night.” Each one is more paranoid, more wary of the police, more afraid. Each one after the other has grown more distant from the idealistic days of the war.

Poor Franciszek buckles under the acute disillusionment; Hłasko makes his despair a metaphor for the emptiness of the regimes of the Soviet bloc. But his power as a writer lies in the precision and the particularity of a single man’s story as it unfolds in a single devastating moment. As a reader, this is the great reward, as it is with so much of the literature from Eastern Europe now being published—often for the first time in English—by Melville House, Archipelago, and New York Review Books: a beguiling glimpse at human beings drawn to the edge of existential possibility and then, so it seems, pushed some more.