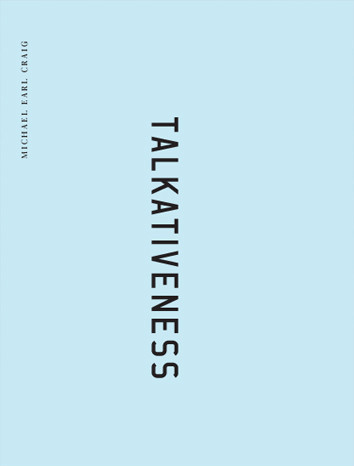 In a recent column of The New York Times, leading poets were once again asked whether their genre could ever regain its relevancy. William Logan’s contribution “As for relevance, poetry does not need to be relevant. It needs to be good” and David Biespiel’s assertion “Does poetry matter? Yes. Can poetry be more relevant? No.” paint poetry as a rogue agent that doesn’t need the approval of its peers. For a bleaker view of things, throw in David Orr’s depiction of poetry as “the weak sister of its sibling arts, alternately ignored and swaddled like a 19th-century invalid, and that will change only by means of a long, tedious and possibly futile effort at persuasion.” A comprehensive picture unfolds. For better or worse, poetry isn’t relevant today and cannot, or cannot easily, become so again.

And yet, either unaware of this assessment or, more likely, in spite of it, Michael Earl Craig (Thin Kimono) opens his fourth poetry collection, Talkativeness, with this Yamamoto Tsunetomo quotation: “No matter how good what you are saying might be, it will dampen the conversation if it is irrelevant.” With Talkativeness, Craig attempts the impossible—to create a beautiful work of poetic art that is also applicable to contemporary readers. And in many stunning ways, he succeeds. 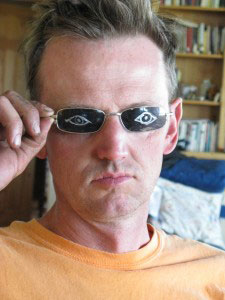 With the cinematic touch of David Lynch, Craig composes poems that are all at once mundane, current, and deeply unsettling. Straight lines drawn from the lead tip of a bullet, tongues crashing onto tables like “obscene mollusks,” and apartment-trashing tortoises adorn an otherwise flavorless, indistinct Midwestern landscape. “It was Nebraska everywhere,” Craig declares, and from this tension between the familiar and the absurd, he builds poems with devastating grief, horror, and dark, biting humor.

We are introduced to the son of a cigar store Indian, the piccolo is asserted to be an instrument of dread, and in an experimental town, seventeen cops can only say “that’s the way the cookie crumbles.”

In “Wild for the Lord,” as the speaker cuts the bangs of his best friend’s wife, his watch feels like “a small corpse on [his] wrist.” This sense of gravity, combined with the consistently sparse language of Craig’s poems, elevates the reading to a vaguely religious experience—the object of reverence, while undefined, seems to be the strangeness and multiplicity of our everyday lives. Even the most seemingly insignificant acts, such as turkeys moving out of the woods toward the house, are treated with a manic urgency:

A group of dark turkeys steps
as turkeys often do from the woods
and moves unsteadily toward the house.
It’s like our throats are about to be slit
I say, laughing nervously.

All the while Talkativeness lives up to its moniker; it is written conversationally, with bare language, dialogue, and references directly to its readers. Distinct to the collection is Craig’s use of repetition that reads like un-erased revisions. Here in “Winter” each line appears to edit and specify the last; it builds in Talkativeness an environment of intimacy and immediacy:

we saw only a shaft of light in winter
we saw only some winter light
the kind of light you most often see in winter.

Undoubtedly entertaining and wide-ranging, is this collection also the bright final answer to the problem of relevancy? Craig provides his own answer for this:

They say poetry is dead. Or that
it might still live, but only
for insiders. . . .
I say maybe, thumbing through my

Maybe, the most unsatisfying answer, is the life-force of this collection. Instead of asserting knowledge, Craig is happier to proclaim “I don’t know.” “From the Couch,” a poem in which Dick Cheney is rolled into Obama’s inauguration disguised as Dr. Strangelove, ends with the line “I’m not even saying this is a poem.” Throughout the collection, he demonstrates a willingness to blend and disassociate forms from their expected norms; poems are couched as sketches, novellas, music, screenplays, speeches, and even CVs.

From the collisions of the mundane and the absurd, humor and severity, poetry and other forms, Craig has constructed a moving, approachable work that might just provide an avenue to bring more readers to the genre. Contemporary practitioners would do well to follow this shining example.

Anthony Blake is a poet from Louisville, Kentucky and an MFA candidate at the University of Arkansas. He has worked as Marketing and Editorial Assistant at Sarabande Books and been published in The Bellingham Review.