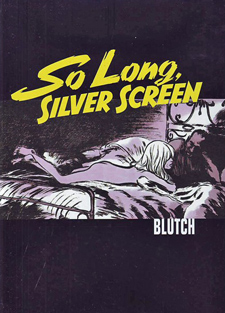 Every film is a ghost story. When we go to the theater, we see flickering images of things in the eternal past yet present which persistently haunt us. This observation cannot be avoided reading the French cartoonist Blutch’s new graphic essay/novel So Long, Silver Screen. With this book, Blutch summons the ghosts from his own filmgoing past to consider the film form. Death pervades the book from the very first panel in which a woman writes, “Adieu Paul Newman.” When the woman tells her lover Newman is dead, he reacts in disbelief: “it can’t be—I think about him every day” as if, by being captured onscreen, stars are immortal.

Blutch has decided to try his hand at film criticism. The book is largely comprised of discussions and arguments between a man and woman about film. We get all of the enduring debates—theater or film, how are women treated in film, and many more. In the discussion of why film is better than theater, the unnamed woman says that “movies give us something plays don’t…faces…and to top it off, dead people’s faces, too.” The book reminds us constantly of how films capture moments which will soon be past. In one chapter, the woman says that “film is a butterfly net for catching little girls.” One of the most gorgeous segments of the book is about Burt Lancaster. In one of the most powerful panels of the work, we see Lancaster as a trapeze artist finishing his act. In the next, a girl reads from A High Wind In Jamaica that “poor little Jako…fell plump on the deck and broke his neck. That was the end of him.”

We are reminded that these seemingly immortal and strong men or icons on the screen will one day fall. Even the living figures whom Blutch invokes seem practically ghostly. In the last segment of the book we see Michel Piccoli, the iconic French actor who has managed to work with directors from Carax to Hitchcock and most recently with Nanni Moretti in We Have a Pope. The woman tells the man to “forget the movies” only to have Piccoli appear from the shadows, a ghost drawing focus. Piccoli is not a man but rather his own imposing image projected. The idea of film itself is becoming something of the past as we move away from actual film to digital projection, losing the palpable feeling of light moving through film stock to create shadows in motion. In So Long, Silver Screen, Blutch shows us not the people behind the screen but instead the ghosts made alive by the flickering light of the projector.

Gabriel Chazan, a filmmaker and writer, is from Toronto, Canada. He is currently studying film history, filmmaking and poetry at Sarah Lawrence College. He writes on film at Home Movies: The Sarah Lawrence Film Journal.