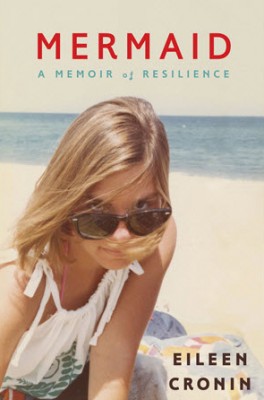 When I read a memoir, I feel like I’m climbing into the kitchen of someone I’ve never met to see if their recipes for life trump mine. It’s amusing—and sometimes shocking—to discover the great variety of messes humans can create with similar ingredients. Lives get twisted and re-shaped by crazy family members, creative impulses, and random events. But some people get a truly strange variable thrown into their stew. Eileen Cronin, for example, was born without legs.

You might think that if you’ve spent your earthly time in prime physical condition, her story will not connect with yours. But that’s not how Cronin’s memoir, Mermaid, comes across. Sure the young Eileen is at a great disadvantage in her early years. She must “squiddle” from one place to another instead of walk. But once she’s old enough to get prosthetic legs, her challenges start to resemble those of typical teenagers.

In fact, it seems that the most complex feature of Cronin’s life is not her lack of legs. She has a much tougher time navigating the shifting emotional currents set off by members of her rambunctious family. Eileen has ten siblings to contend with as she evolves from child to adult. While the narrative makes it clear that these kids have deep bonds with each other, their behavior often bewilders Eileen who obviously has a different perspective on many of life’s great questions. A prominent scene in the book depicts a moment when Eileen’s leg flies off as a handsome dance partner twirls her in the air. The potential for this kind of ordeal is something she’s always got to look out for, so her path in life is truly unique.

Yet these moments just deal with the external Eileen. While the first half of the book hints at her inner confusion, they don’t fully expose it. The story’s middle chapters paint a picture of a fairly stable young woman who seems to be accepted by most people—including handsome, intelligent men. There is something about her easy transition into the arms of a college dean’s son that makes you wonder if life is really all that hard for Eileen. I mean there are plenty of two-legged teenage girls out there who never have such an easy time finding romance or social acceptance. Though she gets nervous about certain decisions, for some unexplained reason Eileen never seems overwrought until much later in the story when tragedy strikes a sibling.

This buoyancy of her tale made me wonder if Cronin was holding something back. Writing about family is always tricky business. Considering the sheer number of people who could object to her take on things (i.e., ten siblings, a mother who may have taken thalidomide, a squadron of Catholic school teachers who taught the Cronins, etc.), holding back is something she may have felt compelled to do. But her smooth evolution into a pretty girl with lots of opportunities makes you wonder what she did with her pain.

During my own adolescence, I had to deal with a physical disability that transformed my life in a purely negative way. Although I had all my limbs, I developed an extreme scoliosis that required plaster casts, a back brace, physical therapy, and endless doctoring. The person who became my high school best friend had an even more serious curvature requiring extensive surgery and long recuperation. These experiences left us steeped in self-loathing that took decades to shake off. We suffered in relationships, we lacked self-confidence, and too often we self-medicated to quell depression it took years to outgrow. As I read Cronin’s story I kept asking myself: How come Eileen never gets depressed? How come she doesn’t seem to hate herself for being so different? Did she have more resilience or character than we had? Or did the size and economic position of her family create some kind of firewall between herself and cruel social forces?

As a reader I was disappointed that the author didn’t provide answers to these questions—or at least give enough evidence on which to hazard a guess. The sheer number of Cronin’s siblings creates another narrative problem. It’s hard to keep each Cronin distinct as you read. Most memoirs don’t have this volume of characters and it’s tough to keep them vivid over a forty-year period of growth. The good news is that readers who hang in until the end will find some richer passages that make the problems of adult Eileen seem far more compelling than those of her post-college self.

The final chapters offer a more honest assessment of Cronin’s problems with alcohol, self-doubt, and trust. Chapters describing her foreign travels are also illuminating. They illustrate her personal courage as she moves unhindered across sketchy terrain. Ultimately, Cronin’s book shows how far you can go if you refuse to eat the crumbs the world offers and make life into a meal of your own.

Colleen Davis is a Pennsylvania writer and author of the website Between the Pond and the Woods, which provides information and a Facebook forum for dementia caregivers. She writes for the Penn Memory Center and is a script writer for the documentary series “Philadelphia: The Great Experiment“, which airs on 6abc.