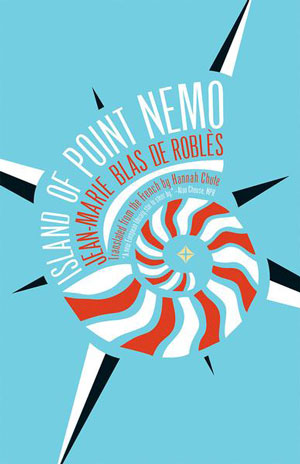 Island of Point Nemo is a fast-moving adventure story featuring murderers, romance, and preternatural turns. But dig further into those turns, and the novel is ultimately a eulogy to books, both as physical objects and as containers for fiction. Written by Jean-Marie Blas de Roblès and newly translated from French by Hannah Chute, Island of Point Nemo features suspenseful plotlines that intertwine in such a way as to make the reader question the natures of fiction, reality, and history.

This is Blas de Roblès’ ninth book and his second to be published in English. The philosophy-professor-turned-novelist’s prize-winning first book to appear in English, Where Tigers Are at Home, arrived relatively quietly in the U.S., but received positive reviews from Kirkus and NPR, which praised it as “a challenge to readers who want their fiction to offer a quick pay-off.” Island of Point Nemo, too, rewards patience, and despite some failings of tone, it is an unpredictable ride that successfully plays with form to develop its themes.

The primary plotline is an odyssey in the tradition of Jules Verne and Conan Doyle, featuring characters inspired by Captain Nemo and Sherlock Holmes. As the protagonists solve the mystery of a stolen diamond, they encounter helpful princes and scientists, murderous eunuchs, roving armies, and circus freaks that lead them around the world and to its most isolated corner, Point Nemo. A secondary plotline features an ereader factory, [email protected] Books, run by the despicable Monsieur Wang, who loves profit and cares little for literature. Subsidiary storylines follow the romantic lives of several of his employees.

Island of Point Nemo’s greatest strength is its willingness to play with the idea of fiction itself. The book comes into its own in the last third, as the various plotlines begin to overlap—briefly—and influence each other. “Reality” blurs, and Blas de Roblès leans into the idea that one of his characters puts forth: “There is no reality that is not rooted in some prior fiction.” Events in one plotline reappear as fictional stories in another. Literary references are plentiful, and familiar characters occasionally emerge to interact with our detectives. Twenty Thousand Leagues Under The Sea, Sherlock Holmes, Moby Dick, The Count of Monte Cristo, and others provide liberal fodder for characters, settings, and plot. As one character asserts, “If you think about it, every book is the anagram of another.”

Time, too, is in flux, and we readers are like the characters who ride a mysterious train, “passengers of this moving Babel [that] drifted haphazardly through suspended time.” Timelines seem to begin after they end, like a snake that eats its tail. The stories of the detectives and the ebook factory fit together like Russian nesting dolls, only you can’t figure out which doll is the bigger one. As the reader, there’s a pleasure in finding and untangling these intersections, in beginning to understand what all these stories have to do with one another.

Throughout, Blas de Roblès often aims to be both fun and funny, and most storylines share a bawdy tone. The adventures are grand, and the over-the-top characters lend a sense that anything can happen next. However, in the service of his humor and his desire for unpredictability, Blas de Roblès also employs a great deal of sexual violence. Monsieur Wang’s abuse of his employees includes watching them on hidden cameras and forcing one woman to undress in front of him; the HR director, catching him masturbating to a video, plans revenge. A woman convinces a sailor to have sex with her and then cries rape, one of the detectives believes, to test the anti-rape device she invented. A prostitute is forced to have a secret code tattooed on her anus, which she must continually show to visitors by penetrating herself with a mirrored device. If these images startle here, they do so equally in the book. One has the impression that Blas de Roblès intends for them to be at least as comedic as they are uncomfortable. Violence, sex, and crudeness can of course be compelling and even funny subjects, but I found these scenes neither humorous nor carefully handled. Ultimately, they lacked empathy, and this detracted from the other, better-explored themes.

The book’s greatest empathy, instead, is for physical books. Blas de Roblès and his characters have an abiding love and deep nostalgia for “real” books, which, in at least one plotline, have been completely replaced by ebooks. When one character discovers a secret library, the author describes it as something rare and beautiful, to be protected. In one particularly enjoyable set of chapters, Blas de Roblès recalls the men and women who used to be employed in cigar factories to read aloud to the workers, to keep them entertained. Storytelling for them is power.

In this world, ebooks, on the other hand, are fragile and untrustworthy. Throughout, ereaders break or malfunction or get hacked. They are also inherently corporate and capitalist, in contrast with the seemingly natural magic of paper books. Monsieur Wang thinks, “The important thing was not even that they purchase the most recent ebooks, but that over and over they buy the possibility of purchasing them.” Blas de Roblès’ concern is one familiar to anyone who follows publishing news: that the people behind ebooks are out to destroy “real” books, and that paper books could disappear. Perhaps this is a more compelling line of reasoning in France, for years a European holdout on ebook adoption that has only recently experienced a jump in ebook sales. But the lesson feels a few years out of date from a U.S. perspective, especially for this avid Kindle user. We know that ebooks aren’t replacing real books, that ereader purchases have slowed and paper book sales have evened out. Rather than denying us access to literature, digitization of libraries has democratized publishing and allowed for more public access to books and historical documents than ever before (though not without raising issues of copyright)—further intermingling our reality with the vastness of real and fictional pasts. Blas de Roblès’ concerns may be romantic (don’t we all love the smell and feel of a bound book, still?), but they ring hollow, even within the reality of his novel.

One notes that Island of Point Nemo is not currently available for purchase in ebook form.