I AND YOU
by J. David Stevens
Arc Pair Press, 64 pages
reviewed by David Amadio 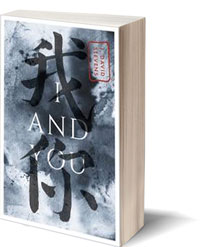 Many of the characters in J. David Stevens’s four-story collection I and You are Chinese immigrants; the author himself is not. In the book’s introduction, Stevens confides that he might never have written about these characters if not for the relationship with his wife Janet, whose ancestors left China in 1899 and later settled in Richmond, Virginia. Reflecting on the source material for his multi-generational narratives, Stevens, whose Mexico is Missing and Other Stories won the 2006 Ohio State University Prize in Short Fiction, admits an apprehension of the age: “[A] part of me still wonders if such stories cross a line, if appropriating segments of our shared history—or Janet’s history alone—is more rightly suited to intimate dialogue. I worry the art is too opportunistic.” This concern is real, and the author is right to acknowledge it. But his outsider’s rendition of the Chinese immigrant experience is respectfully nuanced, and while he does not share the same cultural background as his protagonists, he deeply values their stake in the larger human dilemma that fiction is taxed to solve. 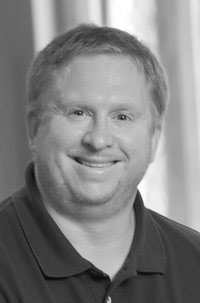 The ways in which his characters perform their “liminal identity,” reacting to the dueling social pressures of China and America, give the stories a quiet yet potent drama. In the titular “I and You,” the “I” belongs to the narrator’s seven-year-old self, struggling to learn calligraphy under the exacting Mrs. Lu; the “You” follows his gradual foray into the wider American world, first as a student and then as an accountant for a pharmaceutical company. While on a business trip to Guangzhou, his white bosses hold the “You” to a stereotypical standard, bidding him to procure civets—small, weasel-like mammals thought to be a delicacy in that part of China—from a local market. Mrs. Lu imposes a different set of criteria on the “I,” but mastering a thousand-year-old art form proves no less painful than searching for dinner amid caged reptiles and cats. Though he doesn’t find the civets, he does achieve temporary success painting his name. It turns out that pleasing Mrs. Lu and failing his bosses both result in a feeling of dislocated pride, which prompts the narrator to concede, “There are worse fates than a life caught between true happiness and sorrow, never seeming to touch either.”

Wei-ling, the central character in “Old San,” teeters on a similar emotional threshold. Abandoned by her husband and all but forgotten by her two grown sons, Wei-ling mourns “the family she had lost,” at times feeling lonely and useless. It is Old San, the elderly man for whom she is primary caretaker, who enlivens her with joy and purpose. So close is their bond that even when she is not by his side Wei-ling still senses him next to her, a phantom of interdependence. We learn that Old San was long ago a victim of a hate crime, and arranging a meeting with his now publicly contrite attacker, a celebrity, becomes Wei-ling’s driving need. If she cannot fix the sad things in her life, she will be “indispensable” in repairing the one sad thing in his. But the meeting turns into a photo-op for the celebrity and his agent, and here, instead of probing Wei-ling’s thoughts on the spike and taint of the moment, Stevens reverts to an image of the caretaker and her charge on a busy New York street, the old man “rock[ing] against her like a boat against its buoy.” A fitting simile, but the reader expects Wei-ling, who understands the language of loss, to address, either directly or indirectly, this new injury of the heart.

“Cleave” is about a brief love affair between a pair of female graduate students, Kara and Minzhi, and presents another shift in default perspective for the Other-seeking Stevens. When the story opens, Kara is in a long-distance relationship, and she half-heartedly believes that learning how to cook Chinese for her girlfriend will save their shaky union. Minzhi, who is engaged to a man back in China, takes Kara on as a student, and what starts out as a lark soon becomes a “collaboration,” a “haven from the everyday” where Kara’s “desire to take chances” increases with each new dish prepared. Following the first and only time they make love, Kara asks Minzhi to break off her engagement and stay with her in the states, to which Minzhi shakes her head and replies, “Americans.” In this soft indictment of Kara’s naivete, Stevens is saying that Minzhi’s freedoms—both social and sexual—are not as guaranteed as her lover’s. Therefore, she must be precise, “like a knife sure of its cuts,” in how she honors the ones she loves, a skill that Kara is just beginning to learn and may never fully master.

Minzhi’s rigid rapport is echoed in “Turkeys,” the collection’s final story, and its best. Raymond Chan’s monomaniacal father wants him to play football, and to ready him for an upcoming tryout he subjects the fourteen-year-old to a near-constant training regimen. “Old questions” about his father’s past nag at Raymond, clouding his pigskin focus. The successful tire salesman deserted his first wife and young daughter when he emigrated from China, and for this reason Raymond feels an ambivalence toward the man, respect as well as censure. The ghosts of that former life lurk at the plot’s periphery, as do the wild turkeys from which the story gets its name. The turkeys, one of Stevens’s strongest extended metaphors, are a feathered fly in the ointment of civilized suburban society, “breaking skylights, scratching paint jobs, and leaving a formidable layer of feces that was almost impossible to scrape off once exposed to daylight.” The birds’ “one insane summer” analogizes Raymond’s performance at the football tryout, where he “throw[s] instinct to the wind and beat[s] back against” the austerity of his father.

With I and You, J. David Stevens has set an example worth following. Rather than continue to shy away from “that different face,” writers  might take the preliminary steps to honestly engage it, to “cross a line” both personally and artistically, to observe, relay, and “comprehend the alienation and dislocation” in the lives of people like Raymond Chan, or Minzhi, or Wei-ling. As a response to those who might criticize Stevens for exercising his privilege, I would argue that his collection is more appreciation than appropriation, an obeisance to the immigrants who inspired it. Stevens claims that immigration is not a “finite proposition,” that the newly arrived are never done settling, never done merging. If that is the case, then the act of receiving those immigrants is also an incomplete process, but these stories serve to make it less fraught, less complicated, less strange. 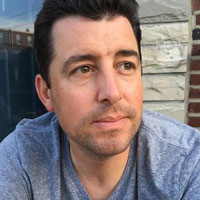 David Amadio teaches Creative Writing and Composition at Lincoln University, where he also edits the campus literary magazine, SIMBAA. He received his MFA in Fiction from Bowling Green State University in 2001. His work has appeared in Talking River, Masque & Spectacle, Packingtown Review, and The San Francisco Examiner. He lives in suburban Philadelphia with his wife and two children.