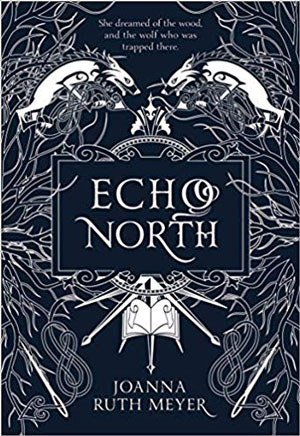 Joanna Ruth Meyer’s second YA novel, Echo North, opens with a classic fairytale premise: Echo, who was attacked as a small child by a wolf, is scorned by her village because of the brutal scars on her face. When her father remarries, the cruel new stepmother takes every opportunity to let Echo know just how ugly and worthless she is. Hoping to pay off the debts that his new wife has incurred, Echo’s father journeys to the city. In his absence, Echo’s situation at home becomes unbearable and she flees to the woods. There, Echo stumbles upon her father, not lost in the city after all, but terribly wounded. As Echo rushes to his side, a wolf appears in the forest clearing—the same beast that scarred Echo’s face years earlier. The wolf promises to heal Echo’s father for a price: Echo must stay with the wolf for one year in his house under the mountain. Upon agreeing, Echo soon learns that the wolf is as much a prisoner as she is. He is confined in the house, and in his terrifying form, by a mysterious enchantment. The house’s magic becomes dangerous at night, and the wolf warns Echo not to leave her bedroom until daybreak. Although he sleeps at the foot of Echo’s bed, she must never light the oil lamp or look at him during the night. The similarity to “Beauty and the Beast,” the Greek myth of Eros and Psyche, and the Norse tale “East of the Sun West of the Moon” might make these plot points seem predictable. However, Meyer does not simply retell an old story; she complicates and reconceives the genre’s conventions.

The greatest wonder of the wolf’s house is his library. Rather than books, it is filled with mirrors that are portals to fictional worlds. The mirror library becomes Echo’s retreat from the increasingly chaotic house and from the wolf himself, who, as the year draws to a close, is careening toward a grim fate that Echo does not fully understand. As Echo explores more of the mirrors, she meets fellow travelers, one of them a young man named Hal whom she finds both attractive and pitiful. She suspects that he is trapped in the mirrors, his ties to reality fraying. She also meets the princess Mokosh, who offers Echo cryptic advice and the possibility of friendship without judgement. For Echo, Mokosh, and Hal, fiction holds the potential for addiction. 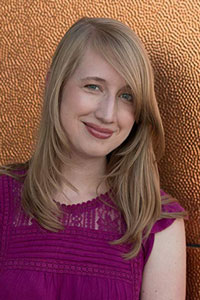 Echo North prods us to question our reliance on the stories that have been handed down to us over the generations. After all, fairytales taught Echo that only outer beauty confers worthiness, and that all questions have answers. “In fairytales there was always a thing to do,” Echo muses, “A kiss to give. An object to retrieve or destroy…” She cannot help but search for a concrete solution to her problems, an easy dichotomy between good and bad. In reality, Echo and the wolf have to constantly negotiate an entangling web of bargains without a clear morality.

As the year progresses, the book-mirrors, along with the rest of the house, start to morph. Within the mirrors’ stories, certain tropes remain the same while aspects of the stories change without warning. Outside the library, the house deteriorates; one by one, the rooms break apart from the rest of the house and threaten to float off into oblivion. Echo and the wolf try to keep things under control by sewing up the house with magical needle and thread but this is ultimately futile. Echo learns that nothing is truly stable. All stories can be rewritten, including her own.

Echo North is divided into two parts, plus an epilogue, and, by the beginning of Part II, Echo has to re-examine the narrative she took for granted about the wolf, Hal, and herself. In the fast-paced second part of the novel, Echo takes her story into her own hands. Some new characters are introduced in this section, and although their emotional significance feels a bit forced, they round out the cast of characters nicely. The most significant of these newcomers, a bard named Ivan, adds yet another layer of metafiction as he attempts to convert Echo’s story into one that he can tell to his audiences. A substantial plot twist will send readers back to search for earlier clues they missed and to reconsider their initial assumptions about the various characters.

Meyer’s prose is lovely, especially when expertly conveying the sense of infinite possibility and marvel of the wolf’s house: “We passed a row of doors that smelled of smoke, and a little ways beyond another row that smelled of rain.” One of the house’s most memorable rooms is the source of the magical binding thread, “… a vast hall overgrown with moss, sunlight streaming in through a tall, broken window. Silver spiders the size of my palm were gathering the sunlight and spinning it.”­

In other moments the writing falls flat. At the beginning of the novel, Meyer turns to cliched language to fill in Echo’s backstory: “And then my whole world shifted…earth-shattering pain.” The author also seems to have a penchant for star-based metaphors when describing romantic moments: “I breathed in the scent of him: leaves and sun, wind and stars.” “And he bent his head and kissed me, soft and gentle and tangled in starlight.” “I can taste my joy—starlight and honey and sharp winter wind.” Some readers might feel that these flourishes go too far, but they are not a distraction from the overall quality of the book.

Echo North is an engrossing tale and a mind-bending interrogation of the very nature of stories, choice, and love. Readers will appreciate the rich fantasy which pays homage to its source material while balancing a complex plot and a meticulously detailed world. Not simply an updated fairytale, Echo North is a thoughtful novel in its own right.

Rachel Hertzberg is from Minneapolis and is currently pursuing a double major at Bryn Mawr College in English and Spanish.