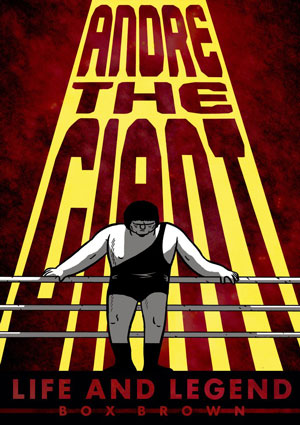 For a generation of professional wrestling fans, Andre Roussimoff was a giant, both as a man (he stood seven-feet, four-inches tall and weighed 500 pounds) and as an icon (he was one of the most successful and beloved wrestlers of all time).

In telling Andre’s story, author/illustrator Box Brown did his homework. A life-long fan of professional wrestling, Brown draws upon interviews with those who personally knew Andre as well archival footage in an effort to show a complete and accurate portrayal of Andre’s life in and out of the ring. Throughout Andre the Giant’s pages we see Andre as a young boy growing up in the French countryside, Andre as an up-and-comer in the professional wrestling circuit, and finally Andre the globe-trekking celebrity. Along the way, Brown gives life to dozens of anecdotes about the wrestler, moments ranging from playful to painful but always compelling and curious.

For those less familiar with professional wrestling, Brown takes pains to make the material accessible. Throughout the course of the narrative, he includes a preface in which he imparts to the reader a useful description of wrestling as business, explains all necessary terminology in text and within a glossary in the back of the book, and walks the reader through the context and culture of professional wrestling fandom during the 1970s and 80s.

Brown’s visual style is simple and fun, much like professional wrestling itself. While a more superhero-y sort of approach might have been equally fitting, Brown draws each moment in a very comic way, giving a light-hearted feel to the entirety of the work. Andre’s size lends itself well to this cartoonish format, allowing Brown to exaggerate Andre’s hugeness even further for effect, a move which lets Brown take the Giant’s legacy and spin it into the stuff of legend.

Brown’s storytelling proves both interesting and entertaining. Told as a chronological series of moments from Andre’s life, including small, often humorous moments such as clowning around with his buddies and altercations in bars and larger, more iconic ones such as his match against Hulk Hogan at Wrestlemania III (arguably the most important match in wrestling history) or his role in the film, The Princess Bride, Brown hopes to show his reader a balance of Andre the man and Andre the icon.
[slideshow_deploy id=’18555′]
This balance doesn’t always work. Brown almost exclusively moves the narrative along at a reckless, breakneck pace. He never really settles into any scene for more than a few pages before moving on to the next one—which works very well throughout the action sequences set during wrestling matches and in cute moments such as Andre’s appearances on TV shows like The Tonight Show, but less well when attempting to bestow upon the reader insight into Andre’s true character. Aside from some of the wrestler’s quirks (for instance, he called everyone “boss”) and his hobbies (we learn that his favorite pastime was playing cards), I never really felt like I came to know the man. Perhaps because they are unheroic, the most human parts of Andre’s life get glossed over—including the most complicated and perhaps interesting parts of his reality outside of the ring, which involved his daughter.

Born to a woman Andre barely even knows, his daughter comes to know her father only through what she sees on TV. His absence in her life is as large as he is—one of the few items Brown lets us know about their relationship (or lack thereof) is that Andre’s daughter only ever meets him on four occasions, two of which she would have been old enough to remember. The entirety of this situation is granted roughly six pages of the 240-page text. At the conclusion of the book, I felt that I knew a lot about wrestling and about the famous moments in Andre’s life, but far less about what truly motivated him. I wanted more. 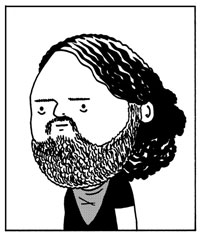 What I can say after reading this graphic biography is that Andre’s life was both fantastic and flawed. He was adored by millions of fans while making millions of dollars. Yet everywhere he went people stared, and as he aged every step he took was accompanied by pain. Andre’s size and the condition which contributed to it (acromegaly) condemned him, as Brown writes in his introduction, “to a death sentence.” Andre’s enormity, the very aspect of his being which helped make him famous, also ensured his health would deteriorate rapidly and at a young age.

This book is a wonderfully illustrated, easy, entertaining read for anyone with even a slight interest in the Golden Age of professional wrestling. Andre’s career is truly fascinating: his journey from small-town, small-time shows to one of wrestling’s biggest stars is a compelling, satisfying story arc. Just expect to walk away knowing more about the Giant and less about the man.

Brian Burmeister is Program Chair of English and Communication at Ashford University and an on-going contributor to the Sport Literature Association. He co-wrote the nonfiction play, Farmscape: The Changing Rural Environment, published by Ice Cube Press, and his poetry and fiction has appeared in such publications as 50-Word Stories, Blue Hour Magazine, and Eunoia Review.