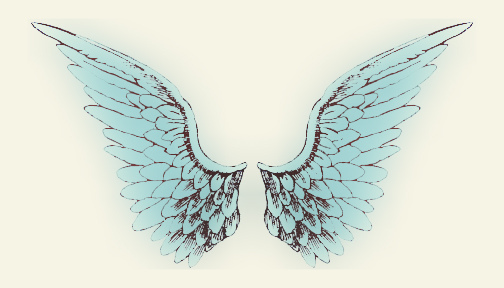 WINGS TO GO
by Jane Carroll

There’s a chicken place on Ridge Avenue called “Wings to Go.” I occasionally wait for a bus across the street, and that sign always seemed to me a little too poetic for a wing place. It makes me think of my mother. Not because of anything having to do with chicken or food, but because I often wished I could give her wings.

I wanted to see her fly away from the stuffy room in the nursing home where she lived for seven years until her death at 92—fly through the plastic window blinds and away from the hospital bed and the carpeted hallway that inexorably became her whole world. She needed to take flight, but her heart was like a tap root—long and strong, growing straight down into the earth. Her body hung on to be fed and bathed and laid down again, long after her mind had left the room.

On my mantelpiece is an old photograph of my mom sitting outside an office building in New York City, where she lived and worked when she was in her twenties. She’s wearing a tailored suit and a fox-tail stole around her shoulders, and she’s holding her hat in her hand. She’s smiling, happy and hopeful, ready to go. Her wide face looks outward. Her long adult life was ahead of her then—the seven kids, take away two, the tiny four-bedroom Colonial she never liked, the too much work, the not enough money, the husband who drank himself into the ground and left her holding the bag.

On the back of that photograph, in her impeccable Catholic-school handwriting, she wrote: “In front of 37 Wall Street. 1945. Flattering, huh! My nose took a good picture, as usual, and I’ve lost weight, honestly!” I imagine she sent the photo to my father before he came home from the war. Did her note reflect her characteristic self-deprecation, or was it an answer to some real or imagined criticism of his? They were married in Scranton, Pennsylvania, in 1947. My mother was 26, a little older than the average bride by the standards of the day.

I’ve often wondered what she felt that day. Was she happy or resigned, hopeful or anxious? As she walked down the aisle, did she feel her life was just beginning, or did she hear the doors of possibility closing softly around her with each step? She realized pretty early on, I suspect, that her marriage was a mistake, but her wings were clipped; she had no easy escape. So she made the best of things.

My mother was fun-loving and social. In her younger days she loved to sing and dance to big-band music. She was her high-school class’s valedictorian, but of the four children in her family, only her brother went to college. In those days Irish Catholic girls were expected to marry and have babies, and not to accomplish much more than that.

She rarely traveled far, but she did have adventures. In 1953, when my father, who worked for the Texas California Oil Company, was assigned to a two-year posting in Sumatra, Indonesia, he flew there first and my mother followed later. She flew by prop plane over five days, with their four young children in tow, my sister only a few months old. A few months into their stay, my mom made a treacherous journey to Jakarta—at one point changing boats on the water—to seek medical help for her first daughter, Terry, who, it would turn out, had leukemia, prompting my parents’ early return to the States, where Terry died before her fourth birthday.

Years ago my mother gave me a bracelet from that time in Indonesia. It’s black enamel on silver, made of seven rectangular sections pieced together. I used to play with it as a kid, setting it on end and opening and closing the metal clasp as if it were the door to a little house. Etched in each section is a figure—a Buddha, a warrior, an elephant, and three female figures—a mermaid, a dancer, and a creature that is half bird-half woman, its feet firmly planted on the ground. My mother told me that one of my father’s co-workers in Sumatra gave it to her. She said he felt sorry for her because she was often alone with the children. My father, I’m guessing, spent his evenings drinking with his buddies.

Back home in New Jersey, she defended us as best she could from my father’s rages. I remember one argument they had in front of my uncle and his family. I can’t say what prompted it, but I remember my mom yelling at my aunt that my father “doesn’t even know what school the kids go to.” My horrified aunt responded with something to the effect of, “a wife should not criticize her husband.” I can only imagine my mother’s response.

When my father left the house, she worked two jobs to support us. Her status as a breadwinner and her outspokenness made her something of an outlier among my aunts and uncles, who all had traditional marriages, with the husbands working and the wives at home with the children. My mom may not have chosen the working life, but she took pride in being seen as competent and resourceful, and her sweet nature and quick wit earned her many friends.

One day, not long before she died, I was sitting by her bed holding her hand. Her eyes were open but she didn’t see me. Her breath stopped and started. Her skin was like paper, and brittle strands of her hair fell down over her eyes. Her eyes moved back and forth and she spoke now and then, but the words made no sense to me. She was remembering something from some long-ago day, or perhaps imagining an adventure she had hoped for but never experienced.

She once told me she had a fantasy of driving across America in a convertible car with two dogs as companions. I can picture it—her hair tied back with a scarf, the dogs leaning out of the car, their ears flapping out like wings, flying. 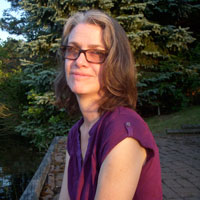 Jane Carroll is a writer and editor for a nonprofit organization. She studied art at Stockton College and received a master of liberal arts degree from the University of Pennsylvania. Her work has been published on Literary Mama. She lives in Philadelphia with her husband and daughter.