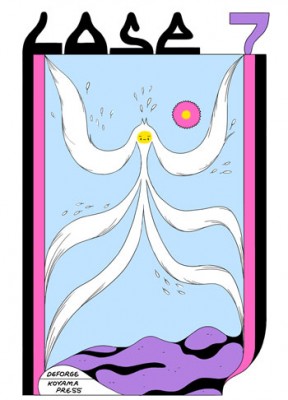 The most recent installment of Michael Deforge’s one-man anthology series Lose 7 features three new stories from the artist: two shorter pieces surrounding a longer work, which form a sort of triptych. Unlike earlier issues, Lose 7 lacks a subtitle pointing to the theme that connects the stories within (“The Fashion Issue” and “The Clubs Issue”). But if I were to choose a title for this seventh issue I might go with “The Growing Up Issue”, or perhaps “The Dysphoria Issue”. The three stories reflect how identities are constructed and the feelings of detachment and anxiety that accompany such journeys of self-definition.

The first story, untitled in this volume but previously published on Deforge’s Patreon page as “Adults”, depicts a children’s game in which a boy instructs a girl on how to pretend to be his mother. The two run through town proclaiming their false identities, fraught with the fear and excitement of fooling the outside world. The parody turns into a nightmare as the “mother’s” literally swelled head assumes and reverses the previously established power dynamic, becoming a brute force of the parental aggression the kids had been imitating.

With his friend, the boy creates a new version of his mother to boss around and power that he could not experience in his real family. In the hands of a child, this adult power—the very bossiness he hoped to escape—becomes terrifying. Deforge illustrates his work with garish primary colors and rough lines drawn over his minimal, schematic forms, suggesting that an actual child has traced over his artwork: every form intact, and yet ever-so-slightly off. The images in “Adults” are so loud they seem to scream. They evoke the bodily monstrosities of Deforge’s early work while keeping those eruptions contained—but just barely.

The longest and most thematically complex of the triptych, “Movie Star”, is the story of Kim, a young woman who discovers a schlocky sci-fi film featuring an actor who looks almost identical to her deadbeat dad, Louis. Her father denies the resemblance at first, but when the actor, a former professional wrestler named Gregory Tan, enters their lives, the two men become fast friends. Louis idolizes Gregory, who is revealed to be his long-lost older brother. After several strange episodes it becomes clear that the two have formed a new “whole” identity in which one man is inseparable from the other, like an actor and a stunt double in a film.

Many critics categorized Deforge’s early work as “body horror.” Deforge’s work should not be constrained to this label, but “Movie Star” retains a sense of the small, real horror of losing a parent, not through tragedy but through change.“Movie Star” is Deforge at his most naturalistic. This is a family drama, with no grotesques lurking on the page. And yet, the story retains the creepiness pervasive in Deforge’s work. Despite Deforge’s clinical, Cronenbergian narrative distance, the story belongs to Kim. Louis’s changes happen off-panel, so we share her shock and confusion as the facets of his new identity are revealed. Gregory speaks about how the knowledge of having eaten his twin brother in the womb shaped him as a person, informing both his strength and his sense of absence, and the reader worries along with Kim that Gregory is repeating this process with Louis, consuming his individual identity. There is the anxiety in seeing one’s parent change so drastically.

The third story returns us to familiar terrain, introducing us to a new creature who joins the bizarre menagerie of Deforgian beasts, which includes such oddities as the Spotting Deer and the Dogs of Canada. However, the “bird-boy”, is different, because unlike the others he speaks for himself. He begins by musing on the reality of his identity, calmly explaining his unique physiology, an awkward juxtaposition of human and bird attributes. 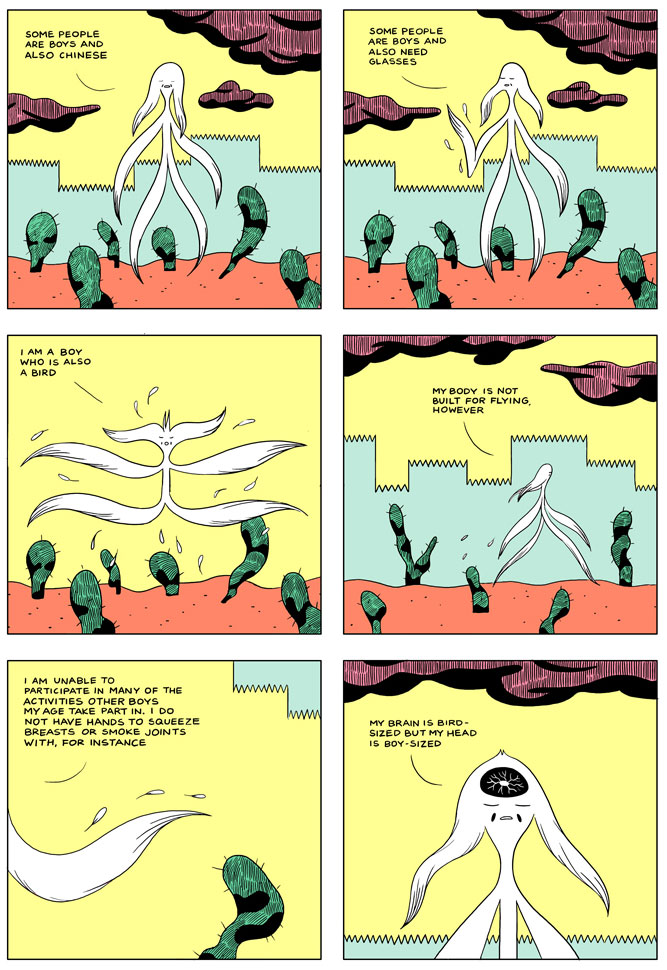 The bird-boy pines for an ornithologist, who turns down his advances out of obligation but tells him that he is “what every ornithologist dreams of.” Unlike Deforge’s earlier pseudo-encyclopedic stories, the core of this story is neither a creepy phenomenon nor an unreliable narrator’s description, but rather a narrative of the, hopes, angers, and sorrows of a being who is struggling inside a body in which he is uncomfortable. Keeping with this feeling of dysphoria, Deforge’s always-schematic illustrations edge toward the abstract.

When read together, these three stories pose powerful questions about the way we view identity. What do the games of children have to do with the construction of self? What does it mean to assume the persona of another? Perhaps the core question of Lose 7 is one we hear throughout our early lives: what do you want to be when you grow up? Unlike many parables of identity, Deforge’s stories don’t focus on an individual’s perception, but rather the vision of self is constructed through relationships. Lose 7 is a profound exploration of these questions.