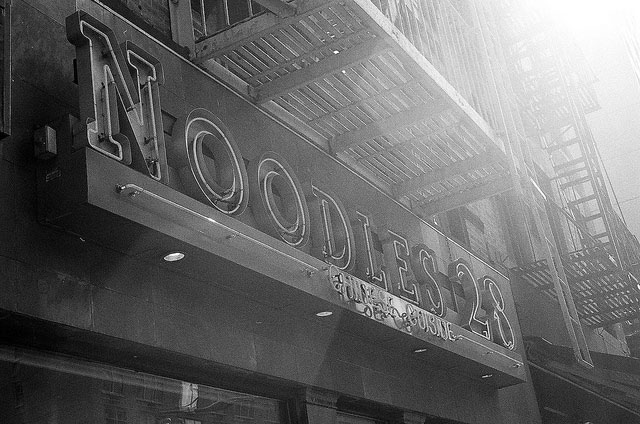 The rainwater dripped lasciviously—as rainwater in New York will do—through the sidewalk gratings and down through the mottled, cracked, brown-stained ceilings of the Grand Street subway station. He was standing near the MetroCard machines, begging. Good writers, so they say, show rather than tell. So I will show you my mother doing a double take, being struck by his youth or his voice or that mysterious thing which stops us now and then and renders us unable to walk away. I will show you the three of us going back up the subway stairs into the tepid light. I will show you us walking down the street, around the puddles and past the fish market, into a crowded little canteen that no longer exists, where noodles and tea could be had for two dollars. There are few places in this city where noodles and tea can be had for two dollars, and the very novelty of the idea seems to indicate a loss of some kind, a deficit, though of what I have yet to discern.

The other day I walked down to Grand Street in the cruel heat of an October day, meaning to sit in this place and eat in silence, to enjoy for a few moments the simultaneously boisterous and sacred atmosphere that results when a great mass of humanity is eating its daily bread all at once. I was instead greeted with a “For Sale” sign. At times that seems to be the defining story of this city—a succession of owners and identities and for sale and for rent signs, a kaleidoscope of endlessly shifting nodes. It is said to be a city of limitless possibility, but that is only because it has no specific identity to force upon you. “There is never another country,” wrote poet P.H. Liotta. “It is the imagined one we call our own.” And in certain moments, I am convinced that New York as a physical entity does not so much exist as it is imagined into being, that this city I would like to call my own is nothing but a phantom, a projection of the collective and incompatible imaginations of the millions who walk its streets. That it is impossible to define is often stated as proof of its grandness of existence, but such a definition is impossible precisely because the city itself could never be a concrete noun. It lives on, rather, as a tortured abstract, a dubious collective, a point of embarkment, of no return, of birth and arrival and final terminus.

They speak of the Immigrant Experience in America Today. I don’t pretend to know what that means, but if it exists, perhaps it can be found somewhere in that bustling canteen, $1 hot Lipton no milk please, $1 shrimp noodles and boots tracking in rainwater on the white tiles, paths soon to be erased like those traced over ocean water and across cement and tar, the invisible lines carved into the soles of feet and washed through the blood of generations, and always, always the most pressing question being, are they my shoes or do I simply walk in them? Are those your footprints or mine? If it exists, perhaps it can be found somewhere among those tables, where I, child of two continents, sit with my Jamaican mother while across from us is the man from Mexico who teaches himself Chinese, who reads in the canteen in his spare hours between his gigs in the club, and his Cantonese girlfriend, who is speaking swift Spanish right now to the young man, the boy who sits across from me and shames us all with his hunger.

The narrative, bound by the rigid rules of exigency, repeats itself. And thus it is not so much the details of plot—the muddled recollection of journeys taken in the dark, the money paid as an investment in hope, the American man who puts you on a Greyhound headed for New York—that I would like you to remember. It is the chapped and swollen hands blistering on a frigid November night. I’m not here to speak to you of politics or policies or the North/South divide. But in your empty moments, I would like you, perhaps, to hear the frequent breaks in a voice that does not know whether the journey has come to an end or just begun.

We promised to help. He didn’t come back the next day, or the day after that. The exponential possibilities of a city with over eight million people had always seemed to me like a beautiful thing, endless and seductive and full of hope. It was only after watching someone drown in this pool of humanity that it became to me a dubious gift, a conflicted and awe-inspiring thing, capable, too, of destruction. In the days following this encounter I would find myself repeating his name over and over, as if one name could account for all the others we will never know, as if through this process of naming we could manage to say this thing that cannot be said. Sometimes as I am walking through a crowd or down a silent back street I feel an indescribable strain of something in the air, laced with sorrow and shot through with silence. I know what it is now. It’s loss. This place of boundless promise is remarkable for its sheer capacity for loss. And we know, all of us, of the multitudes of the unnamed, who appear for a moment in a dream, a day, a second, and are swallowed by this trembling metropolis, lost to us or themselves or humanity forever more.

There is another city, lying invisible beneath the void. Often in a glance or a word or the space of a moment it is whispered that things cannot go on as they are. One day, perhaps, the assembly of forgotten souls will break through the concrete beneath our feet. They will rise, ascend past House and Senate and mangled bodies on railway tracks and the crack of gunshots cutting through a border night. They will say a million novenas for all those we have never known, and in the unending litany of their names, we will realize that this, perhaps, is the heartbeat we have been looking for. 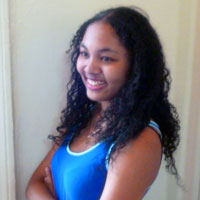 Amber Officer-Narvasa is a freshman at Columbia University. When not writing, she can be found playing the violin, riding horses, or demonstrating her superior paper engineering skills. She loves street art and cupcakes, and has a special place in her heart for neurotic cats.