There’s a secret 1950s housewife in me
that loves amphetamines. Do you love it too?
The zip zap? The blue boogers? Is that the right word?
I found dark lipstick in my room and wore it
when I met Kerouac’s ghost. He said I looked
like a wound. Belly out, clammy skin. You would know,
I thought. Let’s vote on it. Let’s settle this now.
He put his arm out like a wing. Feathers came first,
before the idea of flight. If I had been able
to fall asleep I would have woken up. I woke up Chris
and we looked at his painting. Stripes of seaweed.
Jellyfish. My whole jaw hurt. In a painting
nothing changes no matter how many times
you look at it unless you reach up to the wall and turn
it one way and step back all over again. Kerouac said,
today is my birthday, but no one remembered.
Chris was asleep again. I lay between the two.
I listened for a long time to his breathing. Two days later
when I could sleep he said that he felt electricity
running through me, just lying there.
Those hours passed when I listened to his breathing
and Kerouac’s ghost and my own teeth rubbing
against each other, bits of lace curtains coming apart
and weaving themselves back together again again again. 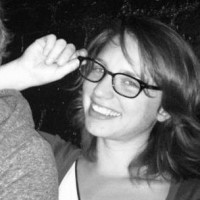 Monica Wendel is the author of No Apocalypse (Georgetown Review Press, 2013) and the chapbooks Pioneer (Thrush Press, forthcoming) and Call it a Window (Midwest Writing Center, 2012). She has been awarded residencies by the Vermont Studio Center and the Jack Kerouac Project of Orlando, Florida, but otherwise she lives in Brooklyn and teaches at St. Thomas Aquinas College.