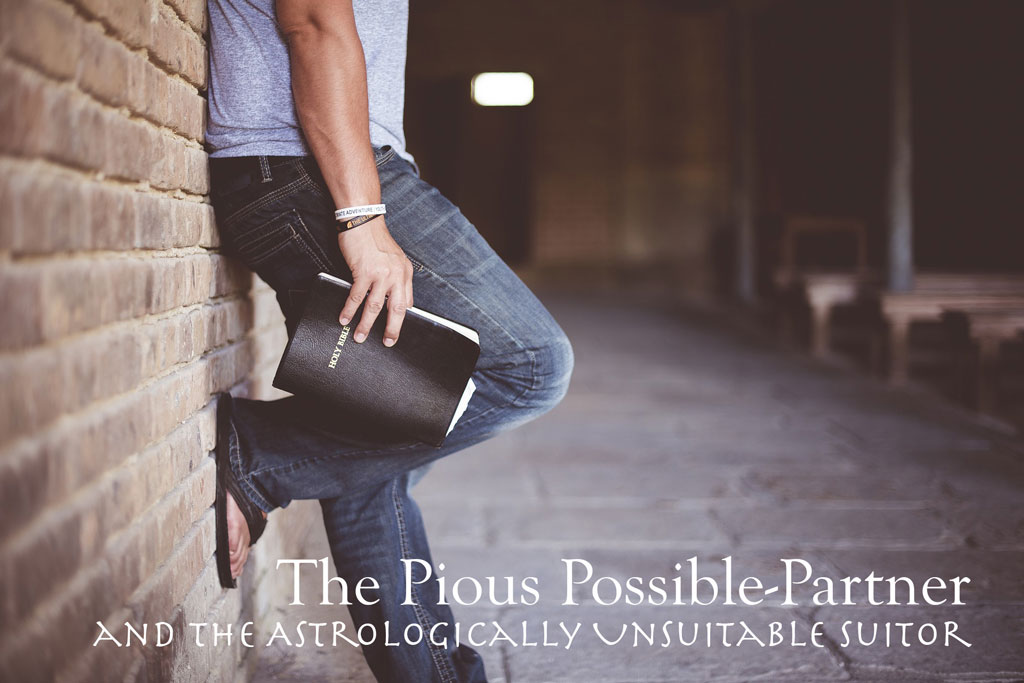 I met a smart, handsome man at an art opening last week. “Theo” and I ended up talking for the whole two-hour reception, then went out for coffee and closed down the place. He asked me out to dinner on Saturday and it was lovely. We like the same music and art and movies, have a similar sense of humor, care about the same issues, and vote the same way on them. Icing on the cake: he does fascinating work and makes a ton of money doing it. The problem—which begs the question, since I am about to ask you whether it actually is a problem—is that Theo turns out to be deeply religious. I am an atheist.

Now I am not sure he is even third-date material. Do you think we have a chance?

Hard to say. You do not mention which religion Theo follows, or tell us what being “deeply religious” means in his case. I can envision a happy relationship between an atheist and a devoutly religious person whose particular denomination, and practice, are more a matter of tradition, history, ritual, and ethics than literal belief in fact-defying scripture and dogma. Although probably less important, it might also help if the atheist and the believer came from a similar religious and cultural background.

I would hold out less hope if the believer thought of religion primarily as a belief system, especially if the beliefs in question were rigidly held and at odds with science, logic, and history, or if the person showed tendencies toward proselytizing or intolerance. My hope would dwindle further if the atheist and the believer came from different backgrounds although that might conceivably cut the other way: I can see some atheists’ being more likely to tolerate or even appreciate someone whose beliefs seem exotic and therefore life-enlarging, as opposed to someone who practices a religion that hits closer to home, perhaps the very religion the atheist’s family still practices. And I can see a believer’s being more comfortable with an atheist who had never explicitly rejected the believer’s faith and tradition.

Since you do not mention any specifics, I suspect that Theo’s being a believer per se is what concerns you. If so, it may be wise not to proceed any further.

But you also sound as if you think he is otherwise such a catch that you’re considering being a bit more flexible. If he he strikes you as equally flexible, and if he has given no indication that his religious beliefs would be especially obtrusive, the two of you might want to keep dating for a while and, among other things, explore this issue further.

Even though flexibility is generally a good thing, I don’t mean to imply any value judgment by using the term here. (Nor do I mean to imply that atheism, or religious belief, is inherently less flexible and more dogmatic than agnosticism. For my part, I hold fairly rigidly to the belief that we cannot know Who or what exists beyond the material world.)  You have every right to choose not to date someone if your beliefs are not compatible. Indeed, if you’re worried that you could never respect Theo’s beliefs, or that you would respect him less because of them, you would not be doing anybody a favor by working toward a long-term relationship.

Is it a long-term relationship what we are talking about here, by the way? If not, I’d be more inclined to go for it: unless Theo is a snake-handler, or starts speaking in tongues when you least expect it, a divergence in core beliefs might actually enliven a longish fling.

From the way you describe your similarity in other matters of taste and value, I would guess that Theo’s religious views are not especially literal-minded or fundamentalist. If you do decide to keep dating him but are not certain about this, be vigilant—I doubt whether you could be happy with even the most clever, handsome, and rich of men if he ever said anything to you about how God did not make Adam and Steve, or if he asked you to make room for his guardian angel at the breakfast table.

Most important, be sure to look out for signs of evangelism. It would be very hard to enjoy dating, much less building a life with, someone you knew was looking to convert you. If he is like almost everyone else on the planet, Theo would be equally averse to your wanting to change him. Don’t try.

Are children an issue? If they become one, you and Theo will of course have to address the question of their religious upbringing or lack thereof. Reasonable advice columnists can differ on exactly when the balance shifts between avoiding premature conflict and staving off potential heartbreak. My own tendency would be to broach the subject fairly early on, but in a general, theoretical sort of way.

Your third date—only the second official one, really—is probably a bit early to start worrying about buying an extra-large box of granola together, much less building a life and raising a family.  I will nevertheless leave with a memory of one mixed-belief marriage that worked out fine.

My sainted mother—who would have guffawed at being called “sainted,” which is one of the many reasons everyone loved her—was a thoroughgoing agnostic, deeply skeptical in matters metaphysical and constitutionally averse to any kind of religious dogmatism. My father—also a very good person, a rare mixture of kindness, wit, and urbanity—was a devout old-school Catholic, an all-or-nothing believer who frequently said things like: “Blow ye either hot or cold.” I asked my mother once how she and Dad dealt with their religious differences, and she said that it was never a big deal because “religion is so personal.”  As for why she had agreed to our being raised Catholic, she said that this seemed only fair because Dad was the one with the strong beliefs. “And it never gets in the way of how we live. It’s not as if he were a Republican or something.”

Her attitude mystified me a little, and still does. But I do understand that she respected his strong faith, and that he respected her basic agnosticism, or at least explained it away as the inevitable result of her Episcopal upbringing. They lived happily together for over 50 years, until the end of his life.

La Wally’s response:
If you think he would judge you, or you would judge him, quit now. Otherwise do whatever feels right.

I don’t know what to do. I recently introduced my best friend Amy to a wonderful guy. She says that she really likes him but that she cannot even think of dating him because he is a Taurus. She says she has had terrible experiences with Taurus men before, and tells me her astrologer agrees that any more Taurus-dating would be a big mistake given their incompatibility as life partners for her. How stupid is that?

Pretty stupid, I would say.

I have nothing against astrology as a fun pursuit, or even as a way to draw on ancient lore, rich metaphor, and vague, universally applicable, skillfully constructed bits of advice and character analysis. Sometimes almost any system can help people know themselves better and learn from one another. But to rule out approximately one-twelfth of the world’s potential romantic and life partners based solely on birth date strikes me as idiotic.

Could there be more to it?  I almost hope that Amy is being less than honest with you, or herself. Is it possible that she found the guy unimpressive for some other reason, and gave you the old incompatible-sign excuse in order to avoid offending either you or the guy?  Or that she can’t admit to herself that she just doesn’t like him, or is not ready to start dating again just yet after those terrible experiences she mentions?

If Amy is serious about her blanket Taurus ban, you can at least comfort yourself that a wonderful guy may have dodged a bullet. Wouldn’t you hate it if he grew to depend on her, only to be summarily rejected when she learned that his moon was in Leo?

I hope and trust that Amy has lots of other sterling qualities to balance out her being a Taurus bigot. As I seem to be saying a lot lately, people should never feel that they have to date anyone they do not wish to date. But it would also be nice if people, especially best friends, were not airheads.

La Wally says:
I am not sure what BnB is asking. Of course it is stupid. But it’s Amy’s choice.

Ask June: The Squirreling-Away Spouse and the Prolix Writer