ANATOMY OF A MONARCA
by Antonio Lopez

Emerging from the quilted cocoon
of the brown monarcas
is an infant
who in silk immigrant dreams, vuela.

Who determine Which Way Home*
by steadying their tarsals,
tres veces mojados,
to the cold iron of La Bestia’s roof.

They flap their limbs,
patterned in the dead-leaf camouflage
of cigarette burns.

Their diet consists of soiled dreams.

After fourteen days of hunching,
the boys will have molted into men
in the dead chrysalis of night.

By morning, the train tunnels
are rusted knives, their low ceilings
sever flight

*Phrase derived from the title of a 2010 documentary that chronicles the journey of unaccompanied migrants from Mexico and El Salvador. One scene depicts two children locking arms to prevent themselves from falling off “La Bestia,” the network of trains used by US-bound bodies to traverse Mexico. 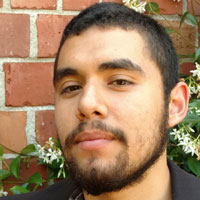 Raised in the San Francisco Bay Area, Antonio Lopez is the winner of the 2017 Santa Barbara Writer’s Conference Poetry Award, as well as the recipient of the Community of Writers at Squaw Valley’s Lucille Clifton Memorial Scholarship. His nonfiction has been featured in TeenInk, PEN/America and his poetry is present or forthcoming in Gramma Press, Cosmonauts Avenue, storySouth, Grist, La Bloga, Acentos Review, Sinking City, By&By, Permafrost, Track//Four, the American Journal of Poetry, and others. He is currently pursuing a Master in Fine Arts (poetry) at Rutgers University-Newark.