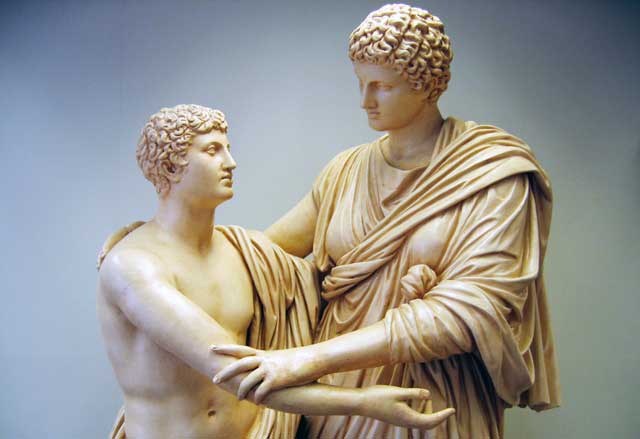 When I was a boy, my father told me the story of Agamemnon, King of Argos, peerless butcher of the Trojan War. Agamemnon was arrogant, which Dad considered a sterling quality for a man to have, so long as he backed that shit up with mighty deeds. Dad might have earned a degree from a good college and spent his life building a library of thick books, but sometimes when he drank his speech tumbled back into that crude pit from which nobody in our family will ever escape, dug by generations of pissed-off roughnecks with vicious tongues. “Agamemnon had to fucking chop up his daughter Iphigenia on a stone altar because that divine bitch Athena wouldn’t give him any wind to sail his army to Troy,” and so on.

Dad laid out the Trojan War like this: After ten years of turning the countryside around Troy into a slaughterhouse, the Greeks finally sacked the city, grabbed the lady they’d come to “save,” and sailed home. Dad thought it was hilarious, history’s manly-man equivalent of a schoolyard fight over a girl that gets way out of hand. When he described what happened next, though, his face tightened into an angry mask:

“So Agamemnon sails home, right, where he finds his wife Clytemnestra shacked up with this other dude, Aegisthus. This was centuries before shotguns, so Agamemnon couldn’t just pull a trigger and have himself a Detroit Divorce, and I guess after a decade of fighting he wasn’t so sharp anymore because Clytemnestra stabbed him in the tub, still furious over him sacrificing her only daughter to the Gods.”

Gripping my shoulder hard enough to make the bones grate, Dad told me about Agamemnon’s son Orestes, who, finding his father dead, knifed his mother and her lover. Committing a double homicide snapped the boy’s fragile psyche like a twig, but that wasn’t the point. Dad, leaning so close I could smell his high-proof breath, delivered the moral: that avenging a dead father was the most important thing you could do, ever.

That if he fell in battle, it would become my responsibility to kill whomever had killed him. In a few years, he promised, my weapons training would begin.

Somewhere out there, the Gods were already laughing at him.

I should mention at this juncture that Dad’s longtime business involved transporting bags of white powder between various cities, against the wishes of a lot of people in uniform. So maybe I can excuse him for laying some pretty heavy stuff on a seven-year-old whose life revolved around cartoons and bacon.

As it turned out, Dad would never teach me how to wield a knife like an ancient Greek. The week I turned eleven, the cops found him on the sidewalk a couple blocks from the house. They couldn’t figure out who or what might have killed him, since the body didn’t have a mark on it. How does any Orestes avenge that? Why do I wrestle with this guilt even now?

Nick’s story “The Great Wave Carries You Forward” appears in Issue No. 5 of Cleaver.