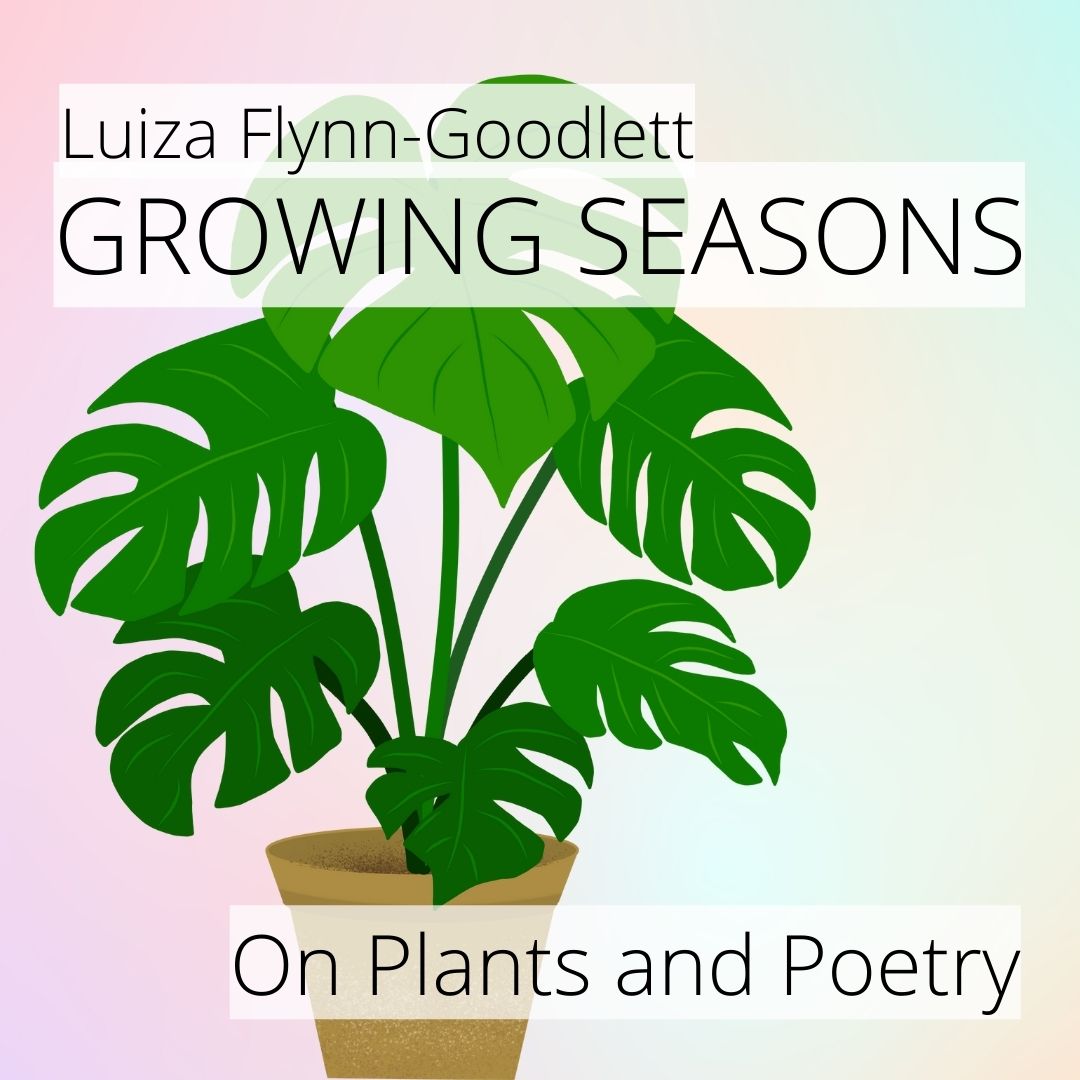 GROWING SEASONS: On Plants and Poetry
A Craft Essay
by Luiza Flynn-Goodlett

Like most things, it began with beauty: My first apartment after college overlooked the backyard of several Crown Heights buildings, which had become an unofficial dump with stained mattresses, twisted remnants of recliners, and an impressive pack of raccoons. I’d just escaped an abusive relationship with a woman who’d unraveled my self-esteem and told me I’d never be a writer, and was working at a pizza shop by Union Square. I’d climb onto the fire escape outside my bedroom window to smoke and look down on this compromised patch of wildness, snow-draped in winter and then bursting—if you looked hard enough—into blossom by spring. I didn’t have my own plants then, but as I tapped my cigarette on the rusted railing and watched ash dance toward the green tangle below, I had a building sense that I’d traveled damagingly far from myself, a child of the Tennessee woods, and that whatever healing I was undertaking would involve returning, somehow, to that self who could lose hours crouched above a creek watching crawdads skim the bottom.

It wouldn’t be until a year later, in a room that overlooked an air shaft, that an acquaintance gave me my first plant—a tiny aeonium. I’d just started grad school, something I wasn’t nearly stable enough for but desperately needed, so was waitressing at a cavernous Italian spot in the Met Life Building by day and taking classes at night, and in between, doing any self-destructive thing I could dream up. It was, to say the least, chaotic. So it was shocking that I managed not to immediately kill the succulent. I even constructed makeshift shelving in my sole window to hold what became a small collection.

I didn’t bring any of those plants across the country when I moved to Oakland after graduation, but I found a rent-controlled apartment (every New Yorker’s dream) beside a tidal inlet called Lake Merritt, which faced the courtyard of a church with a magnolia that bloomed twice a year, including—shockingly—in February, purple flowers almost obscene against bare grey bark. And that was where I became both a poet and a gardener.

See, I’d strayed from poetry too, which had also begun with beauty—acrobatics of Emily Dickinson, passion of Audre Lorde, cleverness of Elizabeth Bishop—and somewhere between getting an education, I’d lost the exhilaration of writing, the unfolding of something simultaneously you and beyond your understanding. I’d dug into the “tradition,” experimented with form, learned what the “New York School” was, while uncoupling myself from the impulse poetry arose from in the first place. In that Oakland apartment, without assignments and deadlines for the first time, I learned how to read for pleasure again and to write for it too. I was Emily’s nobody, and I was free.

I filled the kitchen with succulents, living room with woody greenery, hall with trailing pothos. The blank page and new plant—strange, challenging—drew me forward. I learned about light levels, fertilizer, and potting mixes. I went to a lot of therapy. I bought a moisture probe. I fell in love. I put one word in front of another, cleaned dust from leaves, tried not to overwater, repotted. Something remarkable happened, and very slowly, grew.

Leaves came as I wrote between shifts at a café and, later, during my lunchbreak at a desk job near Civic Center. I walked to Dick Blick to buy handmade green paper and pinned it over the cubicle’s gray, propped grow lights in each corner, and then covered the majority of desk space with vines. I scoured the farmer’s market for what was variegated and fenestrated, what twisted and climbed. I am alive, my little grove seemed to say, even here.

As a decidedly language-arts kid who doodled through biology, each unfurling leaf bore a message—something moves beyond conscious knowledge but is imbued, nevertheless, with vitality—and so, I was drawn back, leaf by solitary leaf, to my own mysteries, which I’d long ago put aside as childish things. Turns out, my genius (in the classical sense) and intellect were not as “universal” as I’d been led to believe, but deeply individual. And, more than that, what I found interesting and gave my attention to was purely my own. So, I turned the same eye that kept careful watch over my plants toward myself—what parts of my writing had I kept in a dark corner; which grown rangy; which overfertilized? I saw the ways I’d contorted, been pruned almost unrecognizably. I saw parts of myself, despite it all, reaching toward the light.

Everyone has bad tendencies as a gardener, and my most prominent echoed a larger flaw—impatience, which leads to overwatering, fussing to death. I wanted everything and I wanted it now, but my own fecundity, like that of my plants, couldn’t be rushed. Instead of pressuring each poem with perfection, I committed to stewarding it toward its own unique potential. The poems, unburdened, started to become wilder and more surprising, reminding me of what I’d written before I knew enough to fear being found out as the strange, obsessive, particular writer that I am. In the process, I slowly uncovered a joy that I thought lost, sloughing off my anxiety about what might come next—I was excited to find out. As pothos grows one leaf on the back of the last, hidden until branching beyond its brother, I put one word before another, trusting the next would come, and the next. And I let go of the desire to be a “great writer” I hadn’t even known I’d harbored, and instead, surrendered to simply being a writer, someone who wrote.

Of course, my plants sometimes struggled—tips of leaves browning or yellowing, peace lily wilting dramatically—and so, forced me to stop, to not just look, but to really see until I understood what was needed. Poems were like this too, each particular in its rhythm, structure, and voice, and all I had to do was to spend time in their presence, look closer, listen deeper. And isn’t that what perpetually impatient me came to these practices for in the first place—to test whether focused, careful attention would be rewarded with beauty. And it always has been. Yes, care coaxes beauty, but so does attention itself—it honors and transforms the attended-to thing, is another word for love. And love transforms not just the beloved, but the lover too. In it, I found what was left behind in the woods long ago—a private grove where I could listen to my own wildness, and for once, see it mirrored in the world around me.

The patience honed by cleaning leaves with a microfiber cloth and monitoring progress against fungus gnats, I turned to sending out my work and meticulously documenting it. Spreadsheet cells gradually filled from a dozen to nearly a thousand over the twelve years since grad school. As the money tree scooped up from beside a dumpster grew stately eight-inch leaves, despite branches not being tightly woven like all others I’d seen, those hours began to add up from a journal publication, to chapbooks, to—thrillingly—a full-length collection. And my plants, prophets of patience, looked on. They outgrew their vessels, flexed into their own singular shapes.

There were (and continue to be) failures, like the anthurium thoughtlessly repotted in heavy, all-purpose soil that succumbed almost instantly to root rot. But hope keeps elbowing its way in—having rinsed ruined roots under a hose, I pulled decayed strands apart, and a few shone white, so I reduced the plant to what clung to those roots, and set it in a vase of clean water. And it thrived there, long neck gracefully bent. Similarly, I learned to love my reams of half-finished poems, knowing it often took several attempts to arrive at the poem I’d been circling. And, even if those explorations came to nothing, there was frequently an image or turn of phrase worth rescuing to root elsewhere. Most importantly, I found that even the entirely wasted, half-finished poem was worth the time as a room to think inside of. So, I’ve come to find failure a friend, following behind, handing me cutting for propagation.

Most of my plants survive these days, reach the size where pruning is required. I can’t say the same for poems, but I at least can tell when the sap is running, strange energy coursing down my fingers and onto the page. And the individual poem or plant isn’t what compels me anymore. Instead, they are simply a language by which to interface with a greater unfolding mystery, an offering to whatever life force animates plants to unfurl leaves and writers to turn toward the empty page, watching their pen glide like a planchette. 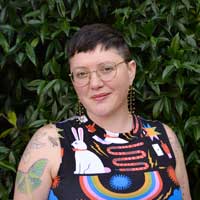 Luiza Flynn-Goodlett is the author of Look Alive—a finalist for numerous prizes, including The National Poetry Series, and winner of the 2019 Cowles Poetry Book Prize from Southeast Missouri State University Press—along with seven chapbooks, most recently The Undead, winner of Sixth Finch Books’ 2020 Chapbook Contest, and Shadow Box, winner of the 2019 Madhouse Press Editor’s Prize. Her poetry can be found in Fugue, Five Points, TriQuarterly, and elsewhere. She also serves as Managing Editor of the Whiting Award–winning LGBTQ+ literary journal and press Foglifter.