In her debut collection Shade of Blue Trees, Kelly Cressio-Moeller conducts a tremendous chorus of voices that rise in a dirge so mournful and lush that all of nature harmonizes; the beauty spellbinds, making the reader feel as if we’ve been privileged to witness language as a potent kind of magic. Mary Oliver, Joni Mitchell, Virginia Woolf, Paul Gauguin, Amy Winehouse, and e.e. cummings live in her lines, chant in her forests, and drench her in spring rain. She hears each of their voices and repurposes their words, sometimes as epigraphs, other times as dazzling lines within the music of her verse.

Cressio-Moeller’s resulting symphony binds death and rebirth in the same notes, as she announces in “Threshold”: “Sometimes all that remains is rebirth. / Play me a mournful tune.” This poem, and so many others, are invitations from Cressio-Moeller to join her in a world that tosses away fearing mortality in favor of full immersion in the natural world. Even the evocative title of the collection suggests something both peaceful and dark in the same spare words.

The word “shade” in the title conjures the shelter of trees to escape a scorching sun, but it can also mean variations of the color “blue.” While we long for the tranquility and wisdom that “blue” offers, most people turn away from the emotionally cold and depressive qualities it likewise symbolizes. Blue is known to slow the metabolism and thus promote calmness like the “winter plums in a copper bowl” in “Panels from a Deepening Winter.” But sometimes blue seeps through as sadness, like in these lines from “Among Other Things”: “The tree’s arms hold her in the indigo lap of sky. / She was dead before they knew she was missing.” Cressio-Moeller’s “blue” fades and intensifies to evoke both comforting serenity and devastating despair. 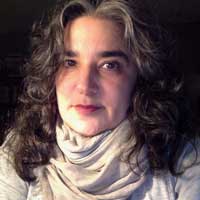 The poem “Panels from a Blue Summer” echoes the blue in its title among haunting lines, such as “My mouth blooms bowls of amaranth and thistle in the melancholy shade of blue trees.” The summer described here is one of “torched moods,” of “bruised gin,” of “Car-wash / girls with yellow semaphores [that] pistol- / whip July, swallow sunlight / clockwise.” There is restlessness that erupts in violence, sex drowned in whiskey. Ordinarily, summer poems bring warmth, but once again, the poet surprises us with an entirely different vibe, employing a myriad of hard consonants to reinforce that cacophony.

Regardless of the mood in each poem, the music never fails to intoxicate. For every aching violin she writes, there is also a melodious harp. From “Panels from a Celestial Autumn”: “I tell my girl-self each time she lights a candle in this dark, You’ve made a small fire.”  The intertwining of darkness and light, of inner and outer worlds, places us firmly in a crossroad, like in the poem “Threshold,” where she writes:

Cressio-Moeller’s lines sprawl across the pages in curving patterns as she coaxes each element to engage with her as the tales unfold. They willingly bend; “I hold the sun’s hand until it falls asleep.” She writes shocking letters to the low tide and to the rain, “Come at me with guillotine sheets, / I will be happy in separation. / It’s not your fault – your window / taps tender me, the slow dance in fog.” The speaker’s gentleness tempers the verse, “Even the rain wants to be horizontal.” She finds her own deep sorrow echoed in the emotions of the elements around her and introduces them to us as if they are lonely friends in need of our comfort. Their personalities and fears become ours as we empathize, understanding now how we could desire their company on our own difficult days. In this way, the natural becomes personal. The things we usually see as distant and uncaring, such as the weather, are warped into companions by Cressio’s hand. Again, she displays an ability to at once show us nature but also twist it to bend to her own imaginative vision rather than vice versa.

The poet often immerses us in the grandeur of the natural world by using powerful personification, even as she writes of loss’s permanent effects and death’s cold grasp. From “Panels from a Deepening Winter,” she writes “The wind wears heels tonight. The stars are not made of clouds and dust but bright bones and flowers. She knows the oars of her long boat will never reach the shore.” In these lines, dream and reality stand not in contention, but cooperation. The poet inserts herself between them, taking both their hands. This is perhaps why it’s so easy to follow her on the journey she maps out for us. She is a capable guide, using the real to invite us into the mystical.

The myths, fairy tales, and paintings she re-imagines make us believe that rejuvenation is within our power if we pay homage to creation. The renewed reverence we gain for our planet through this collection factors into its richness. In “Away” she writes “Overnight earth’s hourglass turns round spilling ocean into sky, starshine against seafloor black— a radiant play of brilliants.” While the night’s landscape and mystery often evoke sadness and fear in the speaker, there is the constant promise of light, the overriding reassurance, as we can see in “Portent with Moonset and Blackbirds”:

poured its cool, bewitching light
………..into the small bowls of my room & garden.

We see here that even in isolation, even in hollowness, loneliness serves as a bowl waiting to be filled with light. Alongside this hope floats the melancholic. As life flourishes, so do ghosts. “Visitation” is a poem about the speaker’s dead parents who return to her as “nimble deer.” Living without her parents is a tragedy the speaker must endure, yet their message from the beyond provides validation and hope: “Your life is not invisible to us. / And the love we always had for you, continues —/ Even now, as we nibble on low hanging branches. Even now, as we climb higher up the hill. / Even now, as we turn our heads away — /leaving, again.” The caesuras at the ends of the lines can be read as hints that the speaker can trust that they haven’t forgotten their love for her. Her parents have been transformed in body, yet they “tapped a familiar code” that only she can decipher. The caesura is almost another bowl: a space of known absence and rupture capable of being both empty and filled. Grief and love can coexist once we realize they are permanent parts of us.

In “Visitation” and three other poems, the poet relies on form as a device to convey the idea of moving grief to the periphery without forgetting those we grieve for. Cressio-Moeller uses the right margin for alignment instead of using the left or centering the poem. For example, the right-aligned poem “Irony” explores the idea that mothers and daughters are tightly linked. It’s stated that the speaker has always called her mother first with any kind of news and now the current news, her mother’s death, makes that impossible. The poem’s location on the page, hovering at the far right edge, suggests that the speaker knows she must eventually push the grief away from her rather than succumb to its darkness.

In her final poem of the collection, “Something to Remember,” Cressio-Moeller leaves us with this: “Darkness does not hunger for anything. / It has everything it needs. The ribs / of shadows are fat with secrets of the living and the dead. It never / wallows in loneliness.” Despite its intimidation, Cressio-Moeller shows us death and darkness not as foes, but as inevitabilities. She goes on to tell us, “If you are patient / your eyes will adjust to the dark,” offering a fantastic reminder that our bodies are built for life and death in the same set of ribs, in the same eyes.

In Shade of Blue Trees, the poet paints shadows powerful enough to swallow us whole. Yet in the “quiet haunting” and “brumal embrace,” there are abundant sensual pleasures that render us jubilant like “thumbs pressed into the lungs of pomegranate halves, releasing a thousand tiny hearts.” Those who’ve ever sought shelter when grieving or hope when confronting fear will find solace and courage in the nature of these poems. This collection soothes and shimmers, offering us safety from grief so terrible it can render us powerless until we muster the courage to face it.  Reminders that the natural world exists to soften the impact will stay with readers like joyful melodies. To read Shade of Blue Trees is to witness a symphony imbued with the loneliness of blue midnights and the brightness of robin’s egg mornings, knowing that those colors keep their life in the same word. 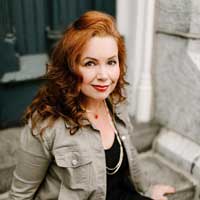 Dana Kinsey is an actor and teacher published in Writers Resist, Drunk Monkeys, ONE ART, On the Seawall, Porcupine Literary, Sledgehammer Lit, West Trestle Review, and Prose Online. Dana’s play, WaterRise, was produced at the Gene Frankel Theatre in Greenwich Village. Her chapbook, Mixtape Venus, is published by I. Giraffe Press. Visit her at wordsbyDK.com.