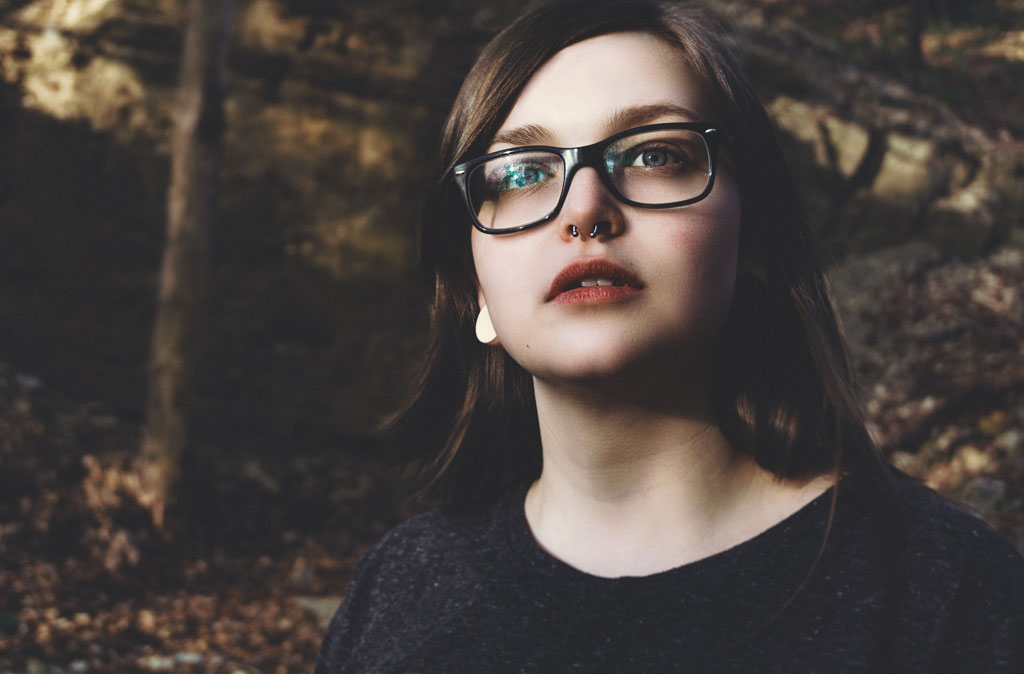 In the mid-1990s, my first story was published in a small college literary journal. Tucked away at the back, nestled among the bold, Helvetica names and previous publication credits was this, which I’d given to the editor:

Dina Honour is a senior majoring in Creative Writing. She’s been told she writes like a woman, which she assumes is akin to throwing like a girl.

Twenty years later I can see that line for what it was: a small act of reclamation. A bold, Helvetica middle finger against what I suspect was not meant as a compliment, but a comparison. The dangerous thing about comparisons, of course, is that in order to exist, there must be a standard against which to compare. 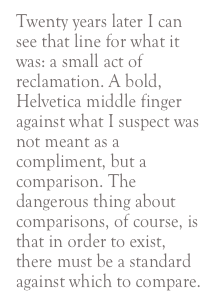 Was there a noticeable difference in the way I structured my writing? Did I have a particularly feminine way of tapping the keys of my ancient word processor? When my very loud printer zig-zagged along could it tell the prose churning out was written by a woman? The stacks of perforated pages, waiting to be carefully separated and submitted, did they have the indelible pinkish watermark of ‘girl’ stamped upon them?

Of course what writing like a woman really means is that my work is both written and viewed through a filter of femaleness. It means my work is likely to resonate more profoundly with the ovarian crowd over the semenarian. Still, the notion, the comparison, rankled. I pushed back, donkey-kicking against the idea that my sex handicapped my writing in any way, that writing like a woman was merely a derivative of writing.

Yet under my small rebellion, a trickle of uncertainty wore a groove over time: if I wanted to play in the publication sandbox with the big boys, if I wanted to be taken seriously, I was going to have to take off my girl-colored glasses and write from a more gender-neutral place. A place not seen through the pink and frilly lens of ‘girl’ but through a beige and precise filter of ‘person’.

I tried. Mightily. I wrote, but my work was blurred and hazy. It was heaps of text with water stains bleeding the edges of ink, making it difficult to read. It lacked clarity. It lacked sharpness. It lacked me.

When I took off those girl glasses, the world became fuzzy.

I lost sight of the fact that to write clearly, you need to see clearly first.

Write what you know. The longer I write, the more I understand what you know is only half of the equation. The other half? What you see. A life viewed through a particular filter which shapes how you look at and experience the world, in reality and on the page.

Each of us hop, skip, and jump through life with a stack of name tags pinned to our lapels. Some are clear and discernible, (Hello! My name is Woman!). Some less so. Sometimes the face we present to the world is masking a hidden identity, an alter ego. When you filter your writing through those identities, rather than around them, something magical happens: writing through the lens of Diana Prince allows you the clarity to be Wonder Woman on the page.

My observations of life are pushed through a sieve of femaleness. Sometimes those spectacles are rose-tinted. Other times they’re so fogged up I’ve got to wipe them on my blouse before I can see beyond my own nose. It took me a long time and a lot of wasted words to understand I need them. To see and to write.

It took me two decades to realize writing like a woman isn’t a handicap at all, but a gift.

Nowadays I use those glasses to my advantage. I use them to add layers, a richness which would be lacking if I only wrote about what I know—the mind, the brain, the intellectual.

I could (and do) write about sexism from an intellectual viewpoint, standing on a platform looking down upon a not-so-scenic realm of misogyny. I can (and do) write true and well about wage gaps and rape statistics. But when I put on my glasses I infuse that writing with my own experiences of life as a woman. Viewing the world through my girl-tinted glasses, rape statistics are threaded through a story of walking home at night, keys wedged between my knuckles. The wage gap becomes a snippet of conversation I had with a woman in tech who described leaving an industry she loved because she couldn’t scrub the toxicity off in the shower. 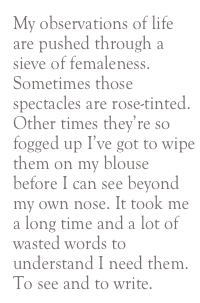 These things only come into clear focus when I notch those spectacles onto my nose, when I pay attention not just to the world at large, but the world seen through my experience of life as a woman. These days when I sit down to write, I make sure I have the right pair of spectacles on. My parenting glasses are well-worn, held together by tape. My wife bifocals are kept in a velvet box with a ribbon. My girl-tinted glasses? They’ve been replaced a few times in my life. I wear them so often I don’t even notice I have them on.

The lenses through which you see life, your own and that around you, shouldn’t be a handicap. On the contrary, they should help you focus. They should take you from myopia to twenty/twenty vision.

Find your glasses. Pull them out and dust them off. Use them to complement what you know, what’s in your mind, with how you see and experience the world. Put them on before you sit down to write. Then, write like a woman. Write like a man, or a parent; an addict, a teacher, a daughter, an artist.

Put your glasses on. It’s amazing how much more in focus the world—and words—become.

Dina Honour is an American writer living in Denmark. Of late she’s been idling at the intersection of feminism, relationships, and life abroad. Meet her there and she’ll tell you a tale. Her work has appeared in Bust, Hippocampus, Paste, and other places. Find her at DinaHonour.com, @DinaHonour, or on Facebook.

WRITING THE SUPERHERO POEM, a craft essay by Lynn Levin