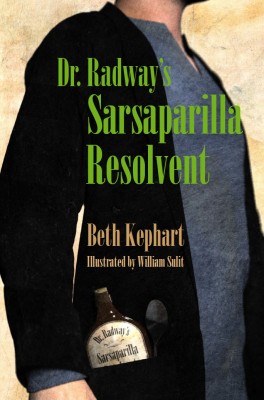 When I lived in Philadelphia, I sensed its history underfoot. One pleasure of Beth Kephart’s lively new historical Philadelphia novel is the strong fit of the writer’s project and the story she tells. In Dr. Radway’s Sarsaparilla Resolvent, Kephart looks at material from the past that we might consider lost to us and demonstrates how traces of that past stay with us through research and writing. In her story of William Quinn in 1870’s Philadelphia, too, much has been lost. As fourteen-year-old William goes in search of what has been taken from his family and as he thinks about what he is missing (including a murdered brother and a father in prison), we see that a great deal of what is loved can be recovered. William internalizes his brother Francis’s voice and can imagine what Francis would say to him at an important moment. Dr. Radway’s Sarsaparilla Resolvent shines as a novel about grief itself, suggesting that in thinking about what we miss, we keep what’s missing alive.

Dr. Radway’s Sarsaparilla Resolvent opens with a haunting image. In a story William recalls his brother telling him, two best friends drowned while one was trying to rescue the other. When the boys were found, they were still clinging to each other. There are many misfortunes and instances of hard luck in the novel. Sometimes having enough food requires petty thievery (something Francis was good at). Many of the characters, particularly William and his best friend Career, behave much like the two drowned boys. They have an impulse to help each other, to reach out and be generous to the people around them. This is a world in which petty thieves are good-natured and kind while some of the folks in power (especially an octopus-faced cop) are corrupt, bad souls. By the end of the novel, we’ll get an alternate version of the two friends who help each other, where magnanimous gestures are successful.

Irresistible to William is Francis’s excitement in rooting for the rower Max Schmitt in a race on the Schuylkill River. The brothers glimpse an artist on the banks of the river painting while the race is on. The artist is probably Thomas Eakins, who did paint Max Schmitt racing as well as other scenes of Philadelphia’s history. Even though much of our story takes place in the shadows of the world of the bright, open Schuylkill race, the characters aspire to the greatness of an athlete such as Schmitt. William’s friend speaks the words of his hero—his boss and the editor at the Public Ledger, George Childs—as though the words themselves are both guide and good luck charm: Industry. Temperance. Frugality.

Dr. Radway’s Sarsaparilla Resolvent includes illustrations by William Sulit, Kephart’s husband, that are a great addition. The novel’s target audience is young adult (I can imagine it being read in a classroom) but is enjoyable for older readers also. William buys the potion of the novel’s title, one of several such colorfully named elixirs he sees advertised in the Ledger. It’s a sham that might work its magic for William simply because of the strength of his desire. He wants, most of all, for it to help his mother. I liked the pile up of historical artifacts and scenes, I liked the sounds of the names of things Kephart brought into her story—“the flangers, fitters, riveters, carters, chippers, caulkers coming in” and so on—that give this story that begins in a hard scrabble moment in a boy’s life in old Bush Hill a feeling of abundance.