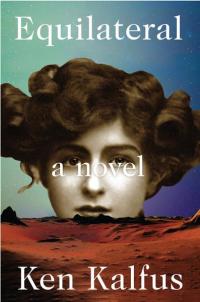 At its core, Ken Kalfus’s Equilateral is about communication: communication between an empire and its subjects; between visionaries and those who finance that vision; between the people who plan a task and those who realize it. And— most essentially to plot while least essentially to the narrative— Equilateral is about communication between the planets Earth and Mars. In a little over two hundred pages, Kalfus manages to tell a rich, fascinating story about our need to connect with something outside of ourselves, and our inherent limitations that keep us from doing just that.

The discovery of canals on the surface of Mars has led the nineteenth century scientific community to conclude that there is indeed intelligent life on our closest celestial neighbor, setting in motion a mad scramble to be the first culture to make contact with it. In Egypt, British astronomer Sanford Thayer is nearing completion of his Equilateral, a gigantic equilateral triangle, each side five feet deep and more than three hundred miles long, dug in the dessert that, once completed, will be filled with pitch and set on fire, creating a “space flare” so large it will be visible to the sure-to-be-there Martian astronomers gazing at the Earth through telescopes of their own.

Thayer is working under a tight deadline. Years of planning and construction will have been for nothing if the Equilateral isn’t complete by June 17th 1894, the day Earth is most clearly visible to Mars for several years. Thayer, with the help of his trusted assistant Miss Kennedy and a native Egyptian servant girl known only as Bint, does all he can to ensure the success of the Equilateral in the face of mounting setbacks.

Kalfus’s theme of communication and its inherent limitations emerges through these setbacks and the responses by Thayer and his crew. A good and honorable man, Thayer believes that his Equilateral, as an unmistakably logically pure mathematical expression, will signal to Earth’s neighbors that it is populated with reasonable creatures worthy of attention. Rational and scientific to a fault, he has embraced not just the purity of mathematics but of Darwin’s theory of evolution, as well. He believes unquestioningly that the Martian civilization is older and therefore more evolved and enlightened than our own. Thayer is desperate to reach out and contact the Martians, to talk to and learn from what he is sure is a race of beings that will do nothing but improve the human experience.

But his mission to communicate with the Martians is at constant risk due to his inability and unwillingness to communicate effectively with “savages” marshaled to go about the business of building his great Equilateral. Noble Thayer’s intentions are, he’s still a 19th century Englishman, susceptible to the rampant misogyny, racism, and imperialism of his time. He believes in the inherent superiority of the white English way, and the duty of all other races to fall in line and do what’s necessary to further his naturally superior goals.

In Equilateral, success or failure rests again and again on the ability for the characters to understand and work with one another. From the massive Equilateral project itself— to the equally massive fundraising required to keep it running, to the much smaller romantic triangle between Thayer, Miss. Kennedy, and Bint.

Equilateral is a morally complicated story told with grace and clarity. There’s a lot going on but it never feels overwhelming or confusing. Kalfus’s prose is elegant; his characters, sharply realized and sympathetic. The novel is smart enough to ask big questions, and smart enough to not definitively answer them. The plot, while simple, has drive and purpose. It’s hard not to get swept up in the narrative drive and optimism, misguided though it is, about the potential contact with the Martians. Reading it, I knew rationally that there was no life on Mars and that Thayer’s quest was doomed to failure, but there was another less logical part of me that was holding out hope.

With Equilateral, Ken Kalfus has managed to produce a two hundred page epic, and a taut page turner out of a quest doomed to failure. An impressive accomplishment. 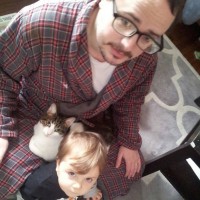