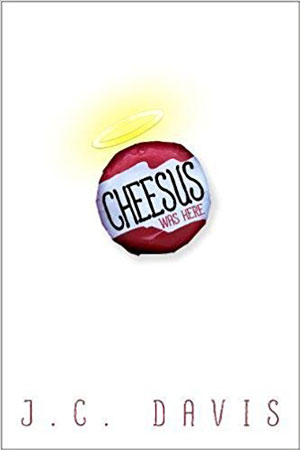 In the small town of Clemency, Texas Sunday morning worship is even more important than Friday night football. With a population of 1,236 and only two churches in town, everyone looks forward to putting on their Sunday best and lifting the Lord’s name on high.

That is, everyone except Delaney Delgado, the main character in J.C. Davis’ debut novel, who chooses to spend her Sundays working at the local gas station. Her sanctuary lies behind the cashier’s counter where she’s free to observe the spectacle without having to engage in any of it. However, when her coworker discovers the face of baby Jesus on a wheel of Babybel cheese, Clemency goes into a frenzy of miraculous proportions.

Word travels fast in a small town, and it isn’t long until news of baby Cheesus spreads like wildfire. Del watches in horror as her quiet life becomes an uproar, with classmates and citizens claiming they were healed after they gazed upon the blessed wheel of cheese. How anyone could believe in miracles—or God for that matter—is beyond her; but matters get worse when someone discovers an image of Jesus on the drive-through windowpane of the nearby McDonald’s. Once the local news stations broadcast that Clemency is the Town of Miracles, visitors from all over flock into town to see baby Cheesus and McJesus. With sharp, unyielding prose Davis follows Del as she embarks on a journey to debunk these so-called “miracles” that come to plague her life.

Del wasn’t always a non-believer. She used to go to church, take communion, and pray every day like a good little Christian girl. It wasn’t until the death of her sister, Claire, when she decided that she wanted nothing to do with God or his overzealous fan club.

I believed, one hundred percent, that God was watching over me and my family. When my sister died, that was pretty much it for me and God. Clearly he didn’t have my back, why should I have his?

Of course, it’s hard for Del to maintain or voice her lack of faith when everyone around her is a firm believer, including her family and, especially, Gabe, her best friend and the son of Holy Cross’ pastor. Her skepticism, concerns, and disbelief are dismissed with talk of God’s love, grace, and mercy—the very things she felt were absent when her sister was dying of cancer. Armed with her personal brand of cynicism Del chooses, instead, to ground herself in reality, and the reality is this: her mother never speaks to her, her brother pays her no attention, her father moved to a different state, and her little sister died a slow, miserable death. No amount of churchgoing or prayer persuaded God to spare her now-broken family.

Part of me doesn’t want to believe in God anymore. The larger part, though, needs God to be real if only so I can blame him for Claire’s death.

Davis symbolizes Del’s lack of faith through her love of photography, a device that allows readers to confront Del’s truths. With her Polaroid camera in hand, she sets out to capture the snippets of life around her, each photo revealing the world as it is, in that moment in time. Polaroids leave no room for speculation – what you see is what you get, either something is there or it isn’t. It’s these tidbits of truth that Del finds comfort in, the pieces of her life she can make sense of.

A Polaroid camera’s a kind of truth you can’t find anywhere else. You press a button, and a minute later you’re holding a small piece of the world

With her trusty camera and a reluctant Gabe by her side, Del sets out to find who’s responsible for the miracles. With baby Cheesus locked within the walls of St. Andrew’s she starts with the image of Jesus on McDonald’s drive-through window. Despite the throng of visitors blocking her way Del manages to snap a few pictures and draws the attention of a local news crew, who asks her to share her opinions on the religious symbols favoring her hometown. Fueled by her frustration she states, unapologetically, that the miracles are a hoax and that someone—not God—is behind all of it. Once the interview is broadcast on national television Del finds herself at odds with everyone in Clemency, even her family.

At a steady narrative pace, Del’s search for the miracle maker unfolds, and the reader is exposed to Davis’ subtle use of dramatic irony: Del is no different than the people of Clemency, the people who choose to believe. The investigation serves as her own way of finding answers in her troubled life, much like those who attend church seeking answers of their own. Del displays a deep desire to make sense of the world around her, a feeling many of us share.

In this way, Davis invites us to seriously think about the complex intertwining of truth and ideals. 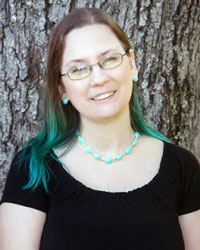 Del operates in truth, but it’s the truth about Claire’s death that exacerbates her grief and prolongs her pain. Gabe, her family, and the rest of Clemency operate through ideals, yet these ideals mask the painful parts of life without addressing them in a constructive way. Davis carefully presents these themes so the reader comes to realize that neither way of thinking is completely right or wrong. The truth, though devastatingly harsh, keeps people grounded and puts things in perspective while ideals, though ultimately unattainable, give hope and help people aspire to achieve something greater. Without being overly didactic or heavy-handed, Davis lays these concepts out for readers to draw their own conclusions. These complex themes are woven seamlessly throughout a riveting first-person narrative. It’s as if Davis has found a way to tap into the reader’s psyche, if only for a moment, to plant the seeds of thought to sprout and grow on their own.

Despite Del’s deep-rooted pessimism, she’s still an easy-to-relate-to, even likable, character. Readers who struggle with their faith can find themselves in Delaney. They’ll share her cynicism, her questions, and her feelings of being betrayed and abandoned by God. However, Del’s story is one that all readers can relate to, whether they believe in God, don’t know what to believe, or don’t believe at all. Davis doesn’t present a black and white story about religion being either good or bad; instead, she gives us a narrative about the gray, blurry lines we cross as we try to make sense of life, what it means, and how complicated it can be.

When Del discovers the truth behind the miracles she realizes that she isn’t prepared for what comes next. The answers she desperately wants turn out to be too jarring for her to comprehend, leaving her worse off than before. Despite the hopelessness she feels and the uncertainty that lies before her, Del comes to understand that having the tiniest bit of faith, even in oneself, can make things better. Or, in Del’s words,

I’m not sure about anything else in this world: God, tomorrow, why awful things happen. But I’m sure about Gabe and he’s right, I’m going to be okay.