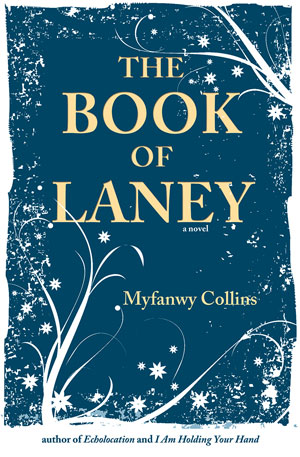 THE BOOK OF LANEY
by Myfanwy Collins
Lacewing Books, 200 pages

When terrible acts of violence occur—as they do all too often in America—our thoughts naturally turn to the victims and their families. But what about the families of those who commit violent crimes? What if someone you grew up with was a school shooter, a terrorist, a mass murderer?

That’s the reality fifteen-year-old Laney is living. Her brother West and his friend Mark, two high school outcasts, boarded a school bus armed with machetes, knives, guns, and homemade bombs. Six people died; twelve were wounded. Mark blew himself up, but West made his way home to kill his mother, and he would have killed Laney, too, if police hadn’t stopped him. Left with the wreckage her brother left behind, Laney feels completely alone, unwanted, even hated. Her father died when she was young, and her mother’s boyfriend is only interested in leaving the state as soon as possible. Strangers phone the house with death threats. This is her only identity now: the killer’s sister.

The Book of Laney is a young adult novel about facing the worst things the world can hand out and learning how to heal. Laney is sent to the northern Adirondacks to live with her grandmother, a mysterious and solitary woman who lives in a remote cabin. At first, Laney thinks she’s hit the trifecta of teenage girl awfulness: no internet, no cell phones, and NO SHOWER. Laney’s grandmother seems a cold and forbidding woman who, when she’s not lecturing Laney about chores (many) and boys (none), is killing bunnies for dinner.

At first, Laney can only think about escape, but she finds compensations in living off the grid. Unplugged from the media, she’s not constantly bombarded by reminders of her brother’s crime, and she finds herself enjoying the quiet, solitary days and closeness to nature. Marshall, the local boy who drives her to school, is another inducement to stay. “I wanted him to know my secrets, and I wanted to know his,” Laney thinks. “I wanted to write on him like he was a yearbook.” 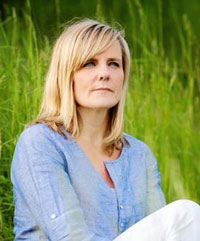 Laney’s first-person narration establishes a realistic and sympathetic teen voice, but The Book of Laney goes beyond the typical young adult “problem” novel and into a mystical, timeless place that feels more like magical realism. After West’s crime, Laney begins experiencing visions in which she sees events from the past as if they are happening to her. Through these visions, she comes to understand her brother’s pain and her mother’s decisions, and she learns the truth about her father’s death and her grandmother’s choice to live in isolation.

Collins is also the author of an adult novel, Echolocation, and a flash fiction collection, I Am Holding Your Hand. The Book of Laney, her first young adult novel, is a lyrical, original story about the legacy of violence, the importance of empathy, and the possibility of redemption. It’s a short novel, but one that leaves a deep impression, with characters and places I know I’ll want to revisit.  In brief, poetic touches, Collins paints a landscape of icy beauty and takes Laney from a scared, empty girl to a young woman ready to reclaim her identity and her life.