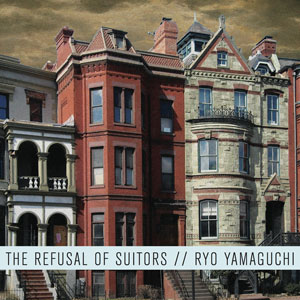 THE REFUSAL OF SUITORS
by Ryo Yamaguchi
Noemi Press, 97 pages

This chaste book could be titled The Story of O. Ryo Yamaguchi rhapsodizes, if more quietly, in the mood of Keats when he exclaims “O for a Life of Sensations rather than of Thoughts!”:

the slow atmosphere of story has refused too long

to seat my rhythms, and I
have refused to elaborate myself through its lines.

His drama of sensate consciousness is based on the refusal (ergo the title) to follow the suit of narrative poetry, in favor of the mind’s free play. Yet one may legitimately ask, as we sometimes do of historical novels, whether the writer courts anachronism or rather renews the proposition. In the case of Yamaguchi, the answer is complex.

Many times I found myself wondering whether this one-vowel incantatory tendency was a tic or sprang organically from what I am tempted to call “new lyric.” “O youth, o conflagration, O end of summer parking lots”; “O office of elaborate letters, O remark”; “O here is the work”; “O John the Baptist”; “O hybridized floral shift.” All this is contained in a single poem, and there are many like it. Bemused, I could say at least that the tone is not ironic, as in Laurie Anderson’s suburbia-mocking “O Superman/O Mom and Dad.”

Rather, this O rang robust, as in Whitman, or melancholy, as in Keats and Shelley. The emotional range is not thin. The nature of the sublime remains an overt and going concern, all the way down to soft archaism, as in “Favor”:

“At the station, with my hands, I asked for your favor,”

a quaint sentiment followed by:

“the object hot with it, having gone over the disfigurements.”

Here manifests a seemingly paradoxical disconnected quality, a flirtation with the grotesque, and a stubborn pleasure in stumping the reader. For instance, there are five versions of the title poem, “The Refusal of Suitors.” Or at least they all bear the same title, scattered through the book. They are remixed with the peculiarity that they share no text except the title. Unlike the numerous odes within the volume, they don’t bear numbers to suggest overlap. Halfway through the book, the first of the five promises us that we have reached the core, the definitive refusal of the apocryphal yet ever-present them or those:

When you are the one waiting for the return,
the world seems more professional, the world
seems to be

Thus the matter seemingly ends, in self-allegation. But there is more to come. In the second, the skittish persona shifts to double-spaced, wary yearning:

I originally meant our friendship

to be a kind of essay, to be secured by a general obviousness

but itchy, otherwise, with details. I feel like we’ve been trying not to make

The deliberate slackness of these lines, potentially off-putting, makes what could be a cramped emotional moment more expansive. The third refusal seems to want to give way to narrative, even if provisional. It seeks greater density of speech and image:

You are the adjustor, fair widow,
the shuttle-king your right hand always counting it off and your left
smearing it into the paint.

Yet the ones that most attracted me were the very short poems, each standing out on its own, as a momentary declaration. “Ought” staves off the inherent regret of the subjunctive mood:

Washed all day
in changes, nimble-tight, we could have been
skylighted all this time and better thunk into cohesion.

The brief slip into slang reinforces the slippage of thought tinged with emotion—standing as a good overall description of the book’s spirit. Just enough rare words are littered through the pages to give it a tang of difference from, an antidote to, the cerebral-ordinary language that has become de riguer in supposedly setting oneself apart from slouchy sentiment. Beyond “administrative,” “argumentative,” “glaring categories,” “substantiate the record,” lie the more appealing “deep in the augur,” “brambles of light,” “leanest gangliotic tic,” “no ghost, no hush.” 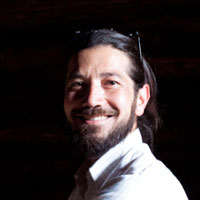 Personally, I enjoyed the poems that dared to give way to unfettered lyricism, a refusal of suitors that offers the sting of rejection, rather than the brandishing of a concept. Yet we grant each author their premise, and judge the execution. By this token, The Refusal of Suitors stands as a qualified success. Its satisfactions are plenty, including a number of times when The Story of O surprises us with its twists of phrase, as in “Ode #6”: “O bird, O anagram, O proctor unattached,” or in the extravagance of the book’s final poem, “Ode #9”: “O city, o thunderclap, o ionic vertical rise,” and then again, “O millionaire flyby, o electric thrombosis.”

At these points, you let the speaker have their way and wait to see what cried apostrophe comes next—trying to second-guess but ending up gratefully surprised that you have no idea.