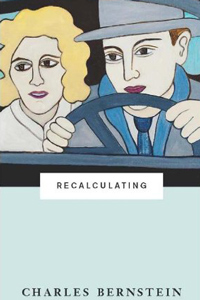 Bringing to mind the now all-too familiar GPS phrase, Charles Bernstein’s latest collection of poetry, Recalculating, depicts a poet pulled in a number of different directions and impulses. As readers, we too at times feel this pull toward the many evocations and articulations present in Recalculating. Yet in many ways, direction—or lack thereof—becomes the thematic anchor which ultimately binds Bernstein’s latest work. Poems in this collection move deftly and swiftly from heady articulations of Bernstein’s poetics, to oftentimes humorous experiments in language and syntax, to poignant translations of works from Catullus to Baudelaire. Yet throughout the collection, the theme of “recalculation” takes on a more sobering nature, as interspersed between Bernstein’s didacticism and humor, grief and loss also begin to take shape in the work, each time creating a quiet swerve and evolution in the work’s “direction.” It’s this versatility and variety throughout the collection which makes Recalculating such a compelling read, as quiet sorrow becomes inextricably linked with both the playful and the cerebral, and which nuances the work as a whole.

In many ways, parts of Recalculating seem written for the well-read and well-versed. Poems such as “The Truth In Pudding”, “How Empty Is My Bread Pudding”, “Manifest Aversions, Conceptual Conundrums, & Implausibly Deniable Links”, and others, outline a kind of conceptual poetics which follow (and purposefully invert) a poetic tradition. As Bernstein writes in “The Truth In Pudding”, “Poetry starts in the present but immediately takes you to its many pasts, through its many paths.” And indeed, “The Truth in Pudding” is a kind of warped amalgamation of a poetic tradition which Bernstein is both indebted to and which he knowingly upsets, using both actual quotations from the past (Poe’s “we attain to but brief and indeterminate glimpses,” for instance) and purposefully inverted paraphrases of familiar poetic and philosophical evocations (Keats’s “A thing of beauty is a joy forever” becomes “A thing of beauty is annoyed forever”; Rousseau’s “Man is born free but everywhere he is in chains” becomes “Information is born free but everywhere in chains”). Poems like this one, alongside other playful pieces such as “I Will Not Write Imitative Poetry”, in which Bernstein repeats the phrase “I will not write imitative poetry” sixteen times, enact a kind of pointed and clever “truth” of the poem. This kind of truth in “pudding” reverberates throughout the collection as Bernstein effectively “opens” the possibility for meaning by presenting contradiction and repetition in each articulation of the “truth” within the poem, writing:

If reading poetry is not directed to the goal of deciphering a fixed, graspable meaning, but rather encourages performing and responding to overlapping meanings, then difficulty is transformed from obstacle to opening.

As difficulty becomes opening, then, the possibility for continuous meaning and interpretation propels the poem, giving it life.

Yet these kinds of hopeful declarations stand at odds with other statement in Recalculating. The collection begins, for instance, with a translation of the Portuguese poet Fernando Pessoa’s “Autopsychographia”, its opening lines declaring, “Poets are fakers/ Whose faking is so real/ They even fake the pain/ They truly feel.” In beginning the collection in this manner, Bernstein’s translation belies an anxiety and sadness present within the collection. While though “obstacle” becomes “opening” in certain instances, in others we see meaning begin to break down as obstacles presented in language depict a frustration or difficulty conveying meaning. In the collection’s title poem, “Recalculating,” Bernstein recalls the omen of bad luck, the Albatross, in Coleridge’s “Rime of the Ancient Mariner” when he states, “Language is an albatross, a sullen cross, a site of loss.” As the site of loss, then, there is a negativity, or a gap, in language that begins to take hold in Recalculating. In the collection’s final poem, “Before You Go”, we see a literal representation of the break down in language as the poem’s repeated phrase, “before you go” becomes truncated in each iteration, inhibiting understanding toward the end of the poem.

Suspended deanimation, recalcitrant fright, before you g
Everything so goddamn slow, before you
Take me now, I’m feelin’ low, before yo
Just let me unhitch this tow, before y
One more stitch still to sew, before
Calculus hidden deep in snow, befor
Can’t hear, don’t say, befo

Ending the collection in this way, and throughout the many poems, we begin to see that, as Bernstein writes in “Unready, Unwilling, Unable”, “Poetry is not about what says but what it does.” Recalculating is Bernstein’s first full-length collection in seven years, and what it does is “direct” us and let us into a world in language which is at once poignant, playful, and complex.

Mary Weston is a native of Philadelphia who graduated from Bard College in 2012 with a degree in literature and a concentration in contemporary poetry and poetics. Currently, she works at a non-profit that deals with adult literacy issues in Philadelphia. In her free time, she can be found reading, writing, or exploring the city on her bicycle.