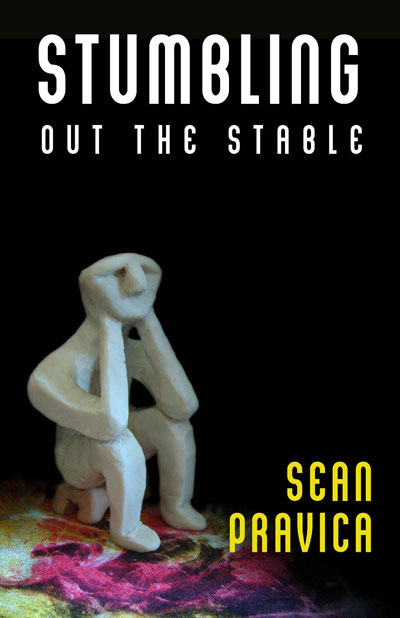 STUMBLING OUT THE STABLE
by Sean Pravica
Pelekinesis Press, 436 pages

In his short stories, Sean Pravica often prefers the magical real and the weird over realism. In his debut novel Stumbling Out the Stable, however, Pravica steps up to a more classic literary endeavor: to find (and not shy away from) meaning in the everyday. For Pravica’s characters in Stumbling, this “meaning” is found between the gods of order and chaos—not simply in their conflicts, but in the strange beauty of their creative harmony.

The novel crackles with the nervous energy of this crossroads between order and chaos, between the dream of freedom and the fear of aimlessness, between the desire for something new and the temptation to remain safe in practical routine. It is at this crossroads that Pravica introduces us to his leading men, the debt-riddled college student-philosopher-photographer Seamus and Seamus’ best friend, Jamie. “What if taking neither path was the best decision?” wonders Seamus,

“The more as well as the less traveled were both born from the same split decision. What if movement was nipped in the bud? Was that not It, content already, seams tied shut, wounds healed, stasis realized?”

The fog was clearing. Seamus knew it.

A young man who aspires to become a photojournalist hitchhiker after graduation (though he already bums rides everywhere he goes), Seamus is still adjusting to the possibilities now opening before him, a world of sense and senselessness, normalcy and absurdity. Pravica gives us this world in still life:

[Seamus] imagined all the daytime life he wanted to capture through his lens. He wanted contrasts, but he also just wanted visual oddities. He wanted the mundane world around him to sparkle with the gilded edges of Its illuminating energy. He wanted to show, through his pictures, what It was, and moreover, what It was not. He wanted his photography to break away the layers of daily failure he was becoming so accustomed to, each class more questionable than the last, each future day more distant, more uncertain, more unrealized.

The creeping chaos haunts Seamus even as it fuels the fearless, shameless Jamie. Together they try every drug they can get their hands on, get drunk on booze and their own philosophies, take lovers and lose lovers, suffer the peculiar deaths of friends once- and twice-removed, and generally search for significance in the everyday, for some mark of purposefulness and meaning amid all the seeming randomness.

In Seamus and Jamie’s escapades, I find myself chimed back to old love affairs with Beat poets Allen Ginsberg and Jack Kerouac, with stories of young, ridiculous men hungry to escape, to get a foothold somewhere, to be cool, to find love, to puzzle out all the mysteries of the world before they hit thirty. These tricksters are timeless. They fall down and pick themselves up again and again, their creative and adaptive powers seemingly endless. And though they may cause us to roll our eyes at their grandstanding and self-indulgence, it is impossible to deny their enduring charisma built of humor and hopefulness, the charisma of finding meaning in the everyday. 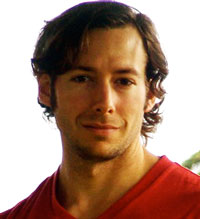 Seamus and Jamie, together with their eclectic coworkers, spend their days at the Singing Pines Country Club working wedding receptions. Their regular day-in and day-out existence thus consists of the set-up and strike-down of someone else’s most special day, packed with the theater of first dances, bouquet tosses, and cake-cuttings—preprogrammed moments we all try so hard to imbue with extra, perhaps even artificial, meaning and significance. But in these champagne-filching busboys, we’re forced to see the truth of things laid bare. We’re forced to see what everyone would deem singular and special, even sacred, become just another part of someone’s day, just another napkin set on just another table for just another dinner.

And here again we find the ultimate driver of Seamus’ story: a desire for (and fear of) some greater meaning met by a buffer of carefully maintained irreverence. In Stumbling Out the Stable, Seamus is forced to struggle with this buffer, with the growing pains of becoming more than just a passenger in his own life.

“So,” Jamie says to Seamus,

“You’d be like a philosophizing, hitchhiking photographer? That’s what you want to do with your degree?” … Jamie smoked more and stared longer. Then, with a voice slowly rising in volume and enthusiasm, “That has to be the coolest thing I have ever heard of!”

Irreverence, it seems, holds meaning in its own right.