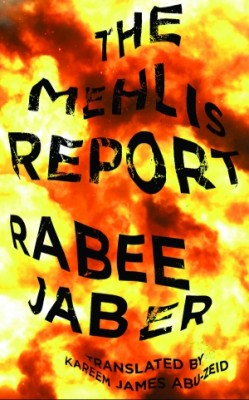 At night, I dream the city; I dream Baldwin’s—and Capote’s—alluring New York at mid-century; I dream Pamuk’s melancholic Istanbul of the same period; I dream Antunes’s desperate 1990s Lisbon and Nasr’s suffocating Tunis and Bolaño’s heretical 1970s Mexico City; I dream Zadie Smith’s London and Mercé Rodoreda’s Barcelona; I dream my own Philadelphia, which sometimes isn’t Philadelphia at all (it may be Brooklyn or Montreal).

Now, I dream Rabee Jaber’s early 21st century Beirut; I dream the enduring disquiet, I dream the hidden springs, I dream the memories (of terraces filled with mulberry trees, of abandoned villas), the loss, the fear, the cranes that rattle the sky. “How many cities are hidden in the belly of this one city?” writes Jaber,

At rare times, you see all these cities together. At night, when you push the window open, outward, and hear the wooden shutters bang against the wall, and then retreat into darkness, your heart jumps.

The Mehlis Report, in English translation by Kareem James Abu-Zeid, is Jaber’s first to be offered to the American reader. At 42 years old, he’s produced some 16 books and has been awarded the 2012 International Arabic Fiction Prize. He also edits the culture page of a major Lebanon daily.

It’s clear in The Mehlis Report that Jaber is as wise and empathetic as he is prolific. His 2005 Beirut is bristling in the summer heat. The specter of civil war looms. People who can are leaving. There are explosions, there are deaths. There is also manic construction—steel and glass rising in place of the ruins of the 20th century streetscape. And the city awaits the report by the UN appointed investigator Detlev Mehlis on the assassination of Prime Minister Rafiq Hariri. Will the real truth come out?

Beirut in these pages is a place holding its breath, and woozy. Jaber’s protagonist is Saman Yarid, the 40 year old head of his family’s legacy architecture firm. A brooding character not unlike Pamuk’s Kemal in Museum of Innocence, Yarid wanders his city, allowing history and memory to wash over him. But unlike Kemal, who became obsessed by his young lover Füsun, nothing in Yarid’s life seems to stoke his heart. At middle age, he is in abeyance, filled with “impenetrable feelings. All this uneasiness. These ups and downs.” Where is he going? Unmarried, he floats among girlfriends. He hardly works (though demand for architects is clearly soaring).

And he really ought to leave Beirut. “Why is he clinging to these streets,” Jaber wonders, “why is he holding onto this city? What’s keeping him here? Salty humid air rustles through the palm trees.” Is Yarid’s love of Beirut irrational?

Perhaps, but Jaber posits an answer to his own question: the city holds the secrets of the dead. About two-thirds into the book, the point of view, which in Arabic fashion has been shifting subtly throughout the text, decisively moves from Yarid to his dead sister Josephine. It’s in this shift that The Mehlis Report, so smartly constructed, transforms from beautiful to exquisite, from the crisis of a man at middle age to the dream of an impossible world.