OF SNAKES AND STONES
by Jennifer Pullen

Medusa still dreams of being beautiful. At night on her sheep skin-padded but still cold stone bed she remembers combing her hair, its dark sheen, the heavy still weight of it. She used to rub her hair with olive oil to keep it shiny. Once she had a lover who liked her to wrap her hair around his neck until he almost couldn’t breathe. He said he liked his women dangerous. She thought he was silly, but she indulged his desires so that afterwards she could lay her head on his knee and he would sing to her of meadows and myths. For some reason, whenever he sang she could taste honey on her tongue. Sometimes when she wakes up and feels her hair hissing and whispering along her neck she runs to the corner of her cave and vomits, as though she could expel this reality and bring back the one of her dreams.

When her siblings visit, they tell her she’s delusional, they tell she has never been beautiful, never been human, and besides, who said snakes were ugly anyway? The scales are so shiny, so green; it’s like having a head full of jewels, they say. Sometimes she hates them, and imagines what it would be like to cut their heads off—they’re not mortal anyway. She’s the only one with that distinction. Her mortality is why she thinks that she was once human; in a time so misty and long ago that everyone else has forgotten. It’s the proof she strokes in her mind like a worry-stone. She’s always glad when her sisters leave. It’s exhausting never being able to look at each other, dancing around the cavern with eyes averted. 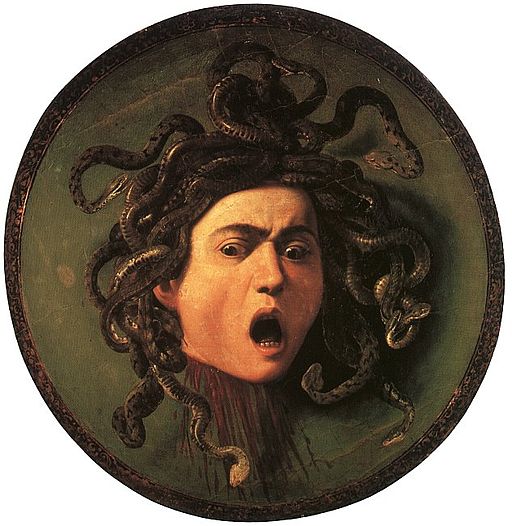 Her only pleasure is the statues in front of her home, all of the would-be heroes frozen in their last moments. So many beautiful but unmoving young men, their curly hair, their armored chests, they are her own very boring harem. She loves their horses with proud arched necks, nostrils flaring, and ears perked. She sits on them and tries to remember riding. Her favorite statue is the one she caught by surprise, he doesn’t even look frightened; he’s standing at the edge of a cliff looking out at the sea. His chest is bare, his tunic down around his hips, his hair clinging to his face. He looks like he’s just finished bathing in the nearby stream, probably some sort of ritual before he comes to her cave to kill her. She likes to stroke his stone cheek and embrace his stone chest. She tells him stories, and pretends he’s her husband. She’s named him Achilles, because she thinks Achilles would be brave enough to marry her, if anyone ever would be. Besides, unless she looked at his heel, he’d be safe.

She brings out cups of wine, one for each of them. She asks him, how was your day? She closes her eyes and tries to feel his hand on her breast. She wants more than anything to be touched with tenderness. When her eyes are closed he sits on the ground next to her, crosses his legs and reaches for a cup of wine. He tells her about going to a city, bustling with people, about the women wearing clothes dyed scarlet or ocean-blue. He says, I brought you some silk. He places the cloth around her shoulders to frame her face. I hope our children are as beautiful as you one day. Then she opens her eyes, her fancy-weaving ability stretched as far as it will go for now. She stands on tip-toe and kisses behind the statue’s left ear. She supposes she must be thankful for small blessings—she could be as imagination-less as her sisters, after all.

One night she wakes from her dreams to the earth vibrating beneath her ear. She sits up in bed and the wind is a Siren outside singing of destruction. She can hear the ocean crashing against the cliffs, restless with its boundaries and ready to crawl across the earth. The snakes in her hair writhe and twist and she holds her hands to her head to try and still the scaly bodies. She wonders if the wind is really that strong tonight or if there are actually Sirens outside? Should she stop up her ears with candle wax like Odysseus? Can one monster be killed by another? She feels ridiculous in her fear, as though someone somewhere is mocking her. As pebbles on the floor rattle she tells herself a story about a young shepherd who got meet the god Pan. She’s certain she had a mother who told this story once upon a time; a very mortal mother with kind eyes and hands with calluses from weaving.

She must have fallen back asleep because she wakes again to silence. The wind is resting from its labors and the world is still. She gets up from her bed and goes outside. Then she sees her statues. The ground is covered in rubble, in bits and pieces of horses and men, a tail, a muscular arm, an armored torso; all shattered, all broken. She doesn’t stop to assess the damage fully, she runs towards the cliffs, even though she knows what she will find there. If these statues farther from the sea are broke, surely her Achilles will be too. But what she knows and what she wants won’t shake hands, so she runs. At the cliffs there is almost nothing to see, the only thing close to whole is his head. She holds it to her chest, pressing until it hurts. She wants to cry but her eyes are dry, and her hair dances triumphantly. The snakes are glad to see beauty destroyed, she is certain. Ugliness loves ugliness. She carries the head of her make-believe husband back to her cave, a plan gestating in her mind. She will take the knife she uses to pry open oysters to the snakes. She’ll cut herself free. She will she will she will.

She can’t cut the snakes, she puts the knife to one and presses the blade home and then collapses from the pain. She tries again, her hand a quavering rabbit and then she cries the way she hasn’t been able to cry for her statues. Now she recites a mantra before she goes to bed, before she eats, before she goes outside to relieve herself. I am the snakes and the snakes are me. She puts the stone head of Achilles in a corner, its face turned towards the wall. She doesn’t dream. She waits for another hero to come, as they always do.

She isn’t so good at keeping track of time anymore, but it feels like an age and half before another hero arrives. She hears his footsteps, hears the gentle clank of his sword against his armor. She can see out of the corner of her left eye his shadow against the wall of her cave. He says, I am Perseus, and I have come to slay you. She smiles to herself, because heroes are always so foolish, with their ideas of honorable combat. Once, she would have simply turned around and turned him to stone where he stood. She would have savored the moment of looking at his youthful face while it was still flesh and blood. She can see by his shadow that he’s carrying something circular, something that isn’t a shield. Are you afraid, Medusa? His voice carries mockery. He’s trying to taunt her, to make her act foolish. Now she understands the circular object in his hands: he’s going to try the mirror trick.

Others have tried before him. But lucky boy, she’s going to make him famous. She waits, she listens to his breath, and she fancies she can hear his blood thudding in his veins. The snakes on her head are quiescent. He steps in front of her and holds up the bronze mirror. She smiles again and glances at Achilles in the corner. She says, did you know, Perseus, that I once had a lover? 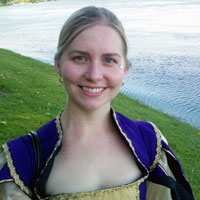