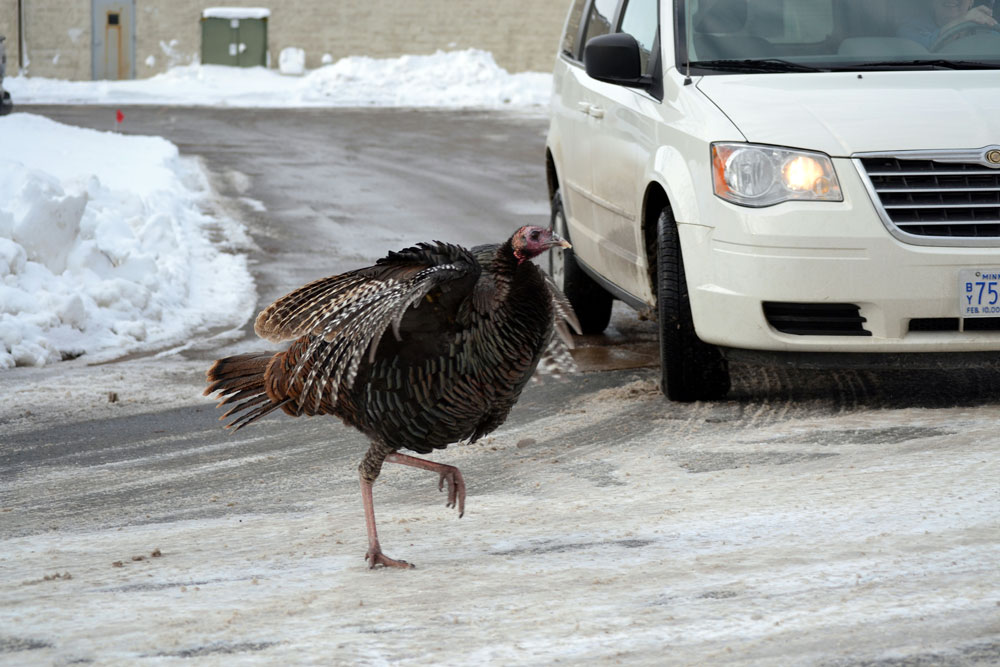 The light was green but a woman was standing outside her car in the middle of the slow lane with her emergency blinkers on. She was surrounded by what looked like geese. Geese are everywhere in Minnesota. Geese aren’t interesting. Grace glanced left and saw too many vehicles hurtling towards her. She had to stop. After stopping, she realized what the animals really were, what this woman was doing with them.

Wild flapping of arms, shooing and yelling and exhorting, she was trying to get three wild turkeys to cross the road.

If this were a silent movie (and, stuck inside her car, it was), Grace would’ve said the woman communicated a fallen, flawed brand of earnestness, that her desperation was the trumped-up, righteous desperation of the undesperate. She looked like an enraged and foolish general.

Forced to wait, Grace focused on the birds. Having not seen wild turkeys since the winter she spent house-sitting for her uncle, Grace thought about her Maine winter and how she didn’t find the silence, solitude, or peace she thought she would have. Did they exist? She didn’t know, but she could still remember that flock and the magic when it appeared: fifteen big, plump, proud, beautiful birds that had tromped through snow and wood in search of the cracked corn Grace’s uncle had told her not to forget to scatter.

Grace watched them through a picture window. Some, after feeding, flew into the branches of the king pines where they perched like bleak-plumaged buddhas before moving on to wherever they moved on to. They were unspoiled, marvelous, natural. And they made Grace feel old, the wild turkeys did, though she was only twenty-seven at the time. More precisely, looking at beings that made the words “rare,” “endangered,” and “extinct” pop into her head, they made her feel that her youth was over, or that it should’ve been.

She did not, however, romanticize the birds completely. She saw their aggression, their territoriality, their hierarchies, and the silly orders they seemed to take from some invisible commander. But she forgave them because they existed, because they didn’t know better, because they were special, and because they came, each day, her wild gift, never failing to make her feel both happy and sad. She appreciated that. She would appreciate that today.

Shot back to today by a blaring car horn behind her, Grace, seeing the road and the woman and the birds in front of her, thought about Thanksgiving and the slaughter. Forty million of these birds, she had read, were killed and consumed a few weeks prior. If a feeling had bubbled up through that article’s words and statistics, it was pride and a sense of accomplishment.

The three wild turkeys eventually crossed the road. They crossed, Grace thought, with dignity, when they felt like it.

The woman scampered back to her car. She wore a long, turquoise coat and an enormous purple scarf and a pink winter hat the word “gaudy” could only begin to approach. She was like Willy Wonka or that technicolor Joseph, and she gave Grace a shy but satisfied little hand wave and a what-can-you-do smile, but there wasn’t a trace of embarrassment or shame on her. She had done her good deed; her actions befit the season.

As the woman pulled off, Grace wondered what the turkeys made of the zealous, colorful, vertical animal who—joining them in the road for an unfathomable and urgent reason—had gesticulated wildly and continuously and tried to communicate with them in an unintelligible tongue while mechanical monsters choked, belched, and screamed all around her.

The woman drove the speed limit, so Grace was able to pass her before swinging into the liquor store’s parking lot. Grace gave her the usual glare of curiosity and loathing she gave to other vehicular idiots when she did, but the woman was too busy singing to notice.

Later, on National Public Radio, Grace heard that one of the cameras on Highway 169 spotted a two hundred pound cougar crossing the road. This had been the night before, in Champlin, a growing suburb of Minneapolis.

She wasn’t afraid. Didn’t fear for the local dogs or children, just thought about a world full of wild things, crossing our roads. She liked the image but shook it off as quickly as it had come and mixed herself another strong drink.

She sat down with it and didn’t think about her sons playing video games in their bedrooms, nor her husband tinkering on his motorcycle in the garage, nor Linus, their spoiled schnauzer, dozing away somewhere warm and marshalling his forces for yet another meal campaign. She didn’t think about her extended family, either, about to descend on them like old-timey marauders. She thought about none of that, only this: Man kills. Man would always kill. Man would kill every last one of them.

That cougar, for instance, was being actively hunted by serious men with sporting hearts and sophisticated weaponry, and those turkeys that woman “saved” out on Highway 55 today? Those turkeys stood even less of a chance.

Grace’s husband had apparently been in the kitchen long enough to retrieve, decapitate, and start to dispatch one of the recently purchased Christmas beers. He had a bemused look on his handsome face.

“I asked you a question.”

He was smiling mischievously as if he knew he were going to get laid tonight, which he was. When Grace felt sad, confused, angry, and small, she needed his contact more than ever.

“I’ve tried three times,” he said. “A man has his limits, you know, his dignity.”

He picked up a set of keys that had been lying on the counter. With two dark, grease-stained fingertips daintily pinching their ring, he jingle-dangled them through the air.

She looked at him, surprised by the banality of the question, the effeminacy of the gesture.

“I need to get a canister out of the shed,” he said, “and I was wondering if these keys were mine or not.” He frowned at the keys and gulped his beer.

“These keys,” he said again, for no apparent reason.

Grace looked at them more carefully. She squinted and thought about the not one but two turkeys she had served to her family over the recent holiday, the smiles on everyone’s faces, the satisfying gluttony.

“Hmm, I wonder where mine are.”

Her husband grunted in a curious, I’ll-be-damned kind of way and looked at the keys again.

“I can’t tell them apart,” he said, suddenly slipping a finger through the ring and twirling the keys before snapping them into his fist. “I think it’s a sign, I think we should be paying attention here—I mean—how and when did we accumulate so many friggin’ locks?”

Her husband, still bemused but looking ready to march forward, finished his beer in one last, greedy gulp and shoved the keys down deep into his pocket.

“It’s damned interesting, though,” he said, “how you can, how you’re so sure of yourself over there.”

“They’re fucking mine, okay? What part of mine don’t you understand?”

Her husband, not a novice with women or wives, grinned, but Grace didn’t see this grin because she had shut her eyes and shook her head, trying to shake off the images and the words, thinking: Wait, we can do better, we can do this differently. Geese are interesting. Geese matter. Do you understand? What I’m trying to say? I can do better. I can do this differently. I can make the difference.

But when she opened her eyes, all that remained was the reassuring, irresistible cocktail. 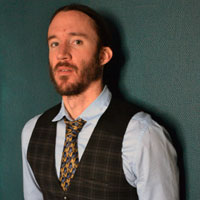