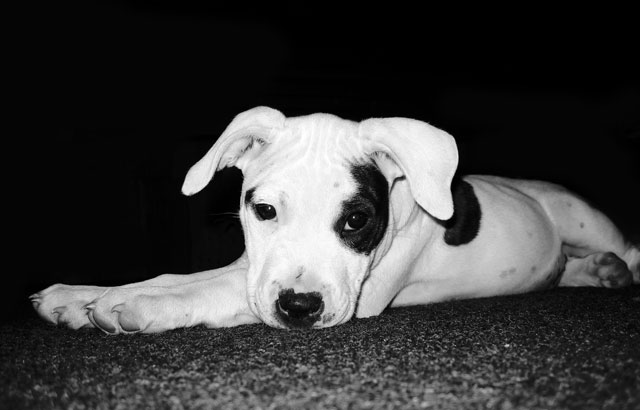 THE INGREDIENTS OF DOG FOOD
by Kevin Tosca

Each night my father dipped two fingers into meat and sauce and then passed that wet present down to Django’s drooling mouth. It was no secret. I saw. My mother saw. My father wasn’t trying to hide anything.

And this didn’t just happen at dinner, it happened whenever my father ate or snacked. If three slices of cheese were to go on a sandwich, one more went to Django. If my father grabbed a handful of peanuts, Django got his share. If there were an orange to eat, Django got a segment. If there were ice cream at the end of the day, Django licked the bowl. The only food my father didn’t give Django was salad, but that’s not because my father hadn’t tried. Django just didn’t like it, which became Django lore, the one thing Django wouldn’t deign to touch: lettuce.

All this food was given to Django in addition to his two regular meals, one in the morning, fed to him by my mother, and one at night, fed to Django by my father. My father wouldn’t miss this six o’clock ritual. He loved the frenzy the sound of the dry food sprinkling into Django’s dish caused, how the buzz of the mechanical can opener spiked the fever. My father prolonged the moment, spooning half the contents of the Alpo can out slower than it needed to be spooned, giving the mix a few extra turns though every morsel had been moistened, waiting before picking the dish off the counter, using his strength to box Django away when he bent down. “It’s his pleasure,” my father liked to say.

I didn’t feed Django, not, that is, like my father fed him. When asked, or when my parents were away, I would give him his regular meals and make sure he had enough water to drink. That was it, and my not feeding Django, my not giving him scraps from my plate or from the table or ever sharing anything I ate or snacked on with him, became lore too—“He ain’t gonna give you nuttin’,” my father would amusedly inform his dog who never gave up hope, who would, in-between deposits from my father, accost me and stare at me with those big, pleading eyes—though I had no doubt that Django loved me, and that I loved him.

Django had been living on the outskirts of one of the construction sites my father supervised. He was a mutt—part beagle, part pit bull, the vet later said (more lore fuel)—and he was friendly and handsome: white (though gray from dirt and outdoor living at the time) with a black patch over one eye. The men cut out the straps from an old hardhat and gave him water. Some, irregularly, tossed him food. Was Django underweight in that vagabond period? His ribs were showing and the number of days and nights he went hungry were incalculable, so yes, he no doubt was, but over the next few years he graduated from his thirties to his forties to his fifties and on into his sixties. By the end of things, he tempted seventy pounds.

At that stage, he could still chase a tennis ball, but only a couple of times: all gratuitous running was over. He could still be considered strong, but not wiry. When his energy came, it came in bursts. He napped and slept a lot. But his food pleasure never waned.

I don’t know who else brought up the weight issue. I know the vet (a man—I’m not making this up—named Dr. Katz) did. He would mildly admonish my mother (my father never went) and talk about diets and weight loss and the complications associated with obesity, not so different than with humans, things like ambulatory trouble and joint trouble and heart trouble and cancers.

But nothing changed. Home and happy, Django would be lovingly scolded: “Dr. Katz says you’re too fat!” and then be patted on the head and fed in the same manner by both my parents, my mother having picked up the habit from my father. “He’s living the good life now,” my father liked to say.

Django died the summer after I graduated from high school. Or: My parents gave Dr. Katz permission to give Django a lethal injection the summer after I graduated from high school. At the end, Django’s breathing was awful to hear. At the very end, he could barely wag his tail when he heard the sounds of the dry food and the can opener, and it was when my father saw food being left in his dog’s bowl and Django not making it to the dinner table that he accepted the inevitable.

The five of us—me, my mother and father, Django and Dr. Katz—were in that small white room together. My mother cried, and then, so did my father. It was the first and only time I ever saw tears come out of my father’s eyes.

Django had lived with us for eight full years, and he had lived at least a couple before that. Many dog lives are much shorter, and harder, and this one’s brought us all a lot of joy and comfort and memories, but I couldn’t help but think that that life could have gone on longer, that there were more memories to make, that this death was preventable, that Django had been murdered.

That is not something you accuse your parents of doing, not when the feeding was, for them, a form of love, so I got myself ready: I was going north to college, leaving home for the first time.

One day, just before I left, my mother and father visited a shelter and chose a new member of the family, another mutt named Sandro. Sandro had been shot multiple times by pellet guns; he had been deliberately burned. He was big, a natural sixty-pounder with an enormous head, one black-patched eye, and black spots dotting his otherwise white-haired body.

My father was proud. My mother seemed hesitantly happy, making it no secret she would have liked a smaller, more manageable—perhaps less masculine—dog. I was simply surprised. There hadn’t been any talk of getting another dog, not with me at least, and I guess I hadn’t given it much thought, but I wouldn’t have bet they’d replace Django so quickly, not that replacement is the best word for what went on, though it does do necessary work.

On those last few days and nights in my parents’ home, that brief time before I left for college and the start of my so-called real education, I watched how my father and my mother fed Sandro. Nothing had changed. Nothing had been learned. And why would it? Nothing, from my parents’ perspective, was wrong. 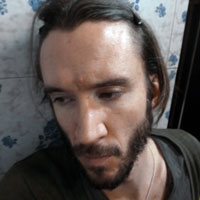 Kevin Tosca’s stories have been published in Spork, Full of Crow, Bartleby Snopes, Vine Leaves Literary Journal and elsewhere. A frequent contributor to Cleaver, his short-short story “Romeo and Juliet” appeared in Issue 4 and his flash pieces “The 104”, “Tibet” and “Like That” appeared in Issue 1. He lives in Paris. He and his work can be found at www.kevintosca.com and on Facebook. Like him. He’d like that.