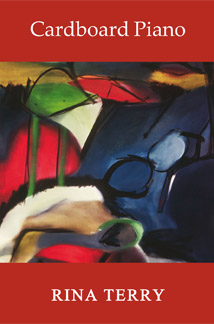 We tend to equate the word “prison” with concrete, metal and despair, ostensibly as means of change or as a tool of rehabilitation. In her new collection, Cardboard Piano, Rina Terry reveals multi-layered evidence of the transformative power of art versus stone. Anyone who is familiar with Stephen King’s prison stories, The Green Mile and Rita Hayworth and The Shawshank Redemption (or at least with the movie adaptations thereof) expects to question the prison system and to explore the humanity of both the inmates and the guards. Terry’s words push the reader to consider the realities of an in-person search for and confrontation of that humanity, in all its potential glory and obloquy.

The opening salvo, “Thirteen Ways of Looking at Inmates” offers a kaleidoscope through which we can feel the entire collection. Terry challenges our accepted notion of rehabilitative space as cyclical: “There is only one/direction. Single file/through metal detector.” Parole notwithstanding, the suggestion is that for most who enter, there is no hope, and what’s more, the system-keepers believe that as well. After all, “an inmate/is and inmate/is an inmate.” The guards do not see what Terry sees, the one man who holds on to his sense of self enough to iron his uniform, or the baptism trough as cleansing agent.

In “I’m Just Glad to Be Here” Terry explores gender politics within the system. She tells us that “Power . . . scratches its balls and zips up/as you step aside for him to pass.” If power is a man, how can women have any authority, and how can Terry, as chaplain, help the inmates to see her as an instrument of change? Indeed, the systemic power works against rehabilitative efforts. When we hear the inmates’ voices, the anger, though it exists, is sparse and muted, and is directed at the forces that landed them in prison, or the futility of existence within prison walls. “Power,” when it speaks, lashes out at the chaplain, and at the missionaries who volunteer. The problem, as highlighted in “Ebenezer Holiness Pentecostal Church Prison Chapel Volunteers” is that people who want to help, to reach the inmates’ hearts and transform them from within, threaten the existence of Power. The volunteers “spread(s) unwelcome/stunning light in a cesspit,” counteracting the “hopeless empty impossible” trinity that equals job security to the officers. Poems that speak in the officer’s voices, and in the voices of the administrators, use harder, plainer language, speak through expletives and ring with indifference..

Terry contrasts the vulgar, explicit vitriol of the guards with subtler, introspective language from the prisoners themselves. “Horse Trough Baptism” exposes the delicacy of hope, and the dangers involved in reaching for it. To agree to baptism, which in prison is a public affair, means agreeing to be exposed in wet, clinging prison garb, to an audience that includes potential rapists. In exchange, they receive “no perks, no parole points,” no tangible rewards. To do so offers the possibility of finding meaning beyond “steel bars and jangling keys/ you can’t touch.” They do it because they “want to believe something. . . because you just can’t bear not to.” The only incentive is hope.

Terry’s poems are filled with music, figuratively and literally. Over and over, we see music do what metal bars do not. “Wherever Two or More Are Gathered” fuses prayer, art and transformation. Set on Christmas Eve, the poem focuses on the chaplain and the only two inmates who show up for the service. They sing “Silent Night” by candlelight, and in the dark cold one inmate breaks into tears. “Such A Moment” explodes a rare and perfect convergence of art and spiritual upliftment, in which “there rose up such great joy/the air was moist with the tears/they could not dare to shed.” The titular poem, in which both the chaplain and an inmate lose themselves in the soundless music the inmate plays on his fake instrument, illuminates the healing nature of art.

The American prison system operates on the premise that rehabilitation is possible. The stone walls, while protecting “us” from “them,” are meant to eliminate or control negative characteristics and transform inmates into ex-criminals. Terry shows us that art can do what the system does not, and through her controlled use of language and imagery, proves the power of art to effect change.