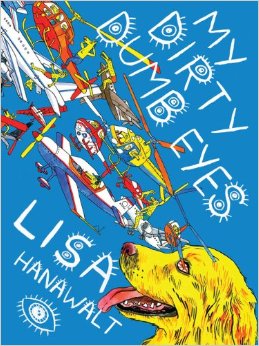 My Dirty Dumb Eyes, released last May, may be comic artist Lisa Hanawalt’s debut text with a major publisher, but it highlights her preexisting popularity. Indeed, Hanawalt’s text shows its chops through its diverse array of humorous comic vignettes often originally commissioned for well-known print and internet periodicals—from New York Magazine to The Hairpin. A few months prior to its release, one of these comics, “The Secret Lives of Chefs,” first printed in the pages of Lucky Peach—a magazine co-created by Momofuku-founder, David Chang—was nominated for a James Beard, the preeminent award in the culinary world.

In addition to “The Secret Lives of Chefs,” where Hanawalt creatively imagines bizarre skeletons in the closet out of the public personas of renown restauranteurs, she weighs in on the world of fashion and film in other comics. Her eyes certainly are not dumb—she can speak knowledgeably about a vast swath of culture in order to poke fun at it.  But, dirty is an apt descriptor for much of her work where genitalia and evocations of sex predominate.

Even in a multi-page comics review of the New York Toy Fair, she admits her libidinal impulses by the seventh page, making the “uncomfortable observation [that her] attraction to certain toys feels kind of… sexual?” Following this observation, she contends that one toy is dildo-like and another cries semen-like tears. After voicing these thoughts, she moves into a more serious discussion of the role of toys in childhood nostalgia, yet, at the comic’s end, she illustrates herself in a wedding dress smooching the dildo-like toy. She refuses to leave the sexual behind or silent on the page. 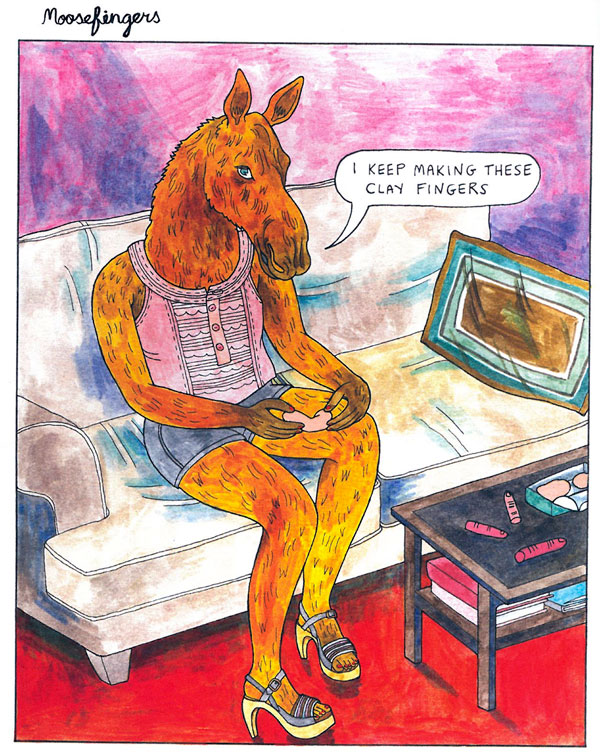 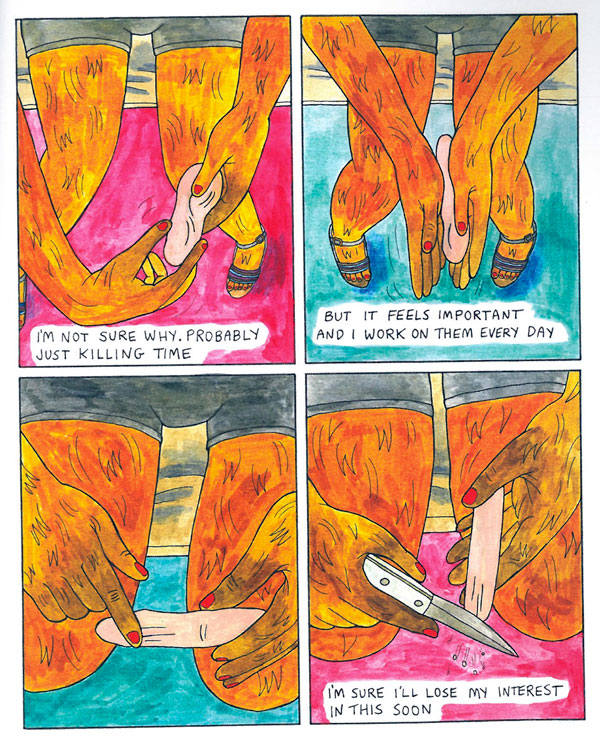 Across her oeuvre, Hanawalt often depicts her sentient beings as animals, but her embrace of the animalistic does not build on the visceral, sexual energy, but departs from it. These very-human animals, rendered in Technicolor, sometimes discuss more poignant topics, regularly reaching existential impasses and unearthly conclusions. Following from an unresolved argument about driving style, the cat in “Control” unrealistically and successfully propels the car into the air by driving over a car, leaving the horse passenger in tears over the multi-car heap of twisted metal behind them. In “Moosefingers,” a horse questions her artistic decision to make idiomatic finger sculptures, wondering at the worth of the “pile of weird fingers” and tossing and turning in bed without resolution.  On the next page following this conclusion, we see a photograph of some of these sculptures, suggesting that the horse’s artistic angst is Hanawalt’s own. In the comic as a whole, these tonally serious comics are interspersed among the lighter fare. 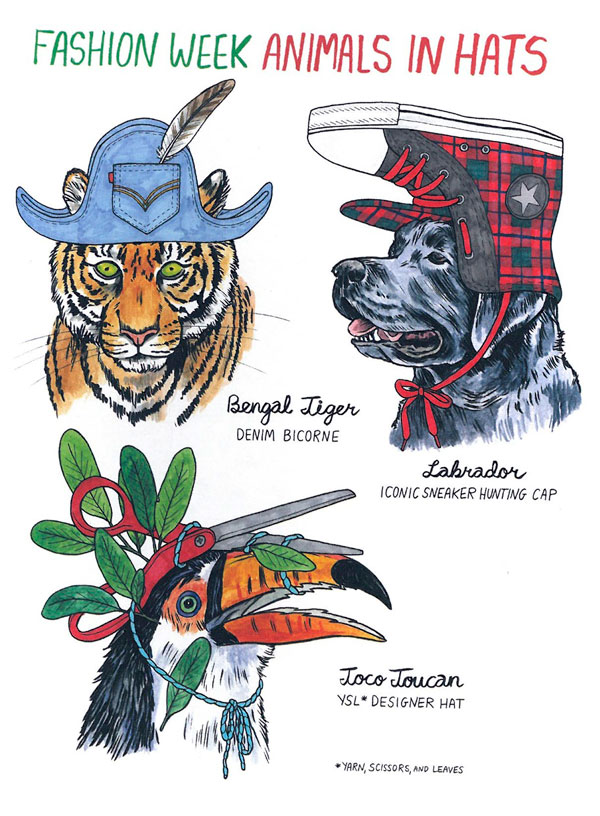 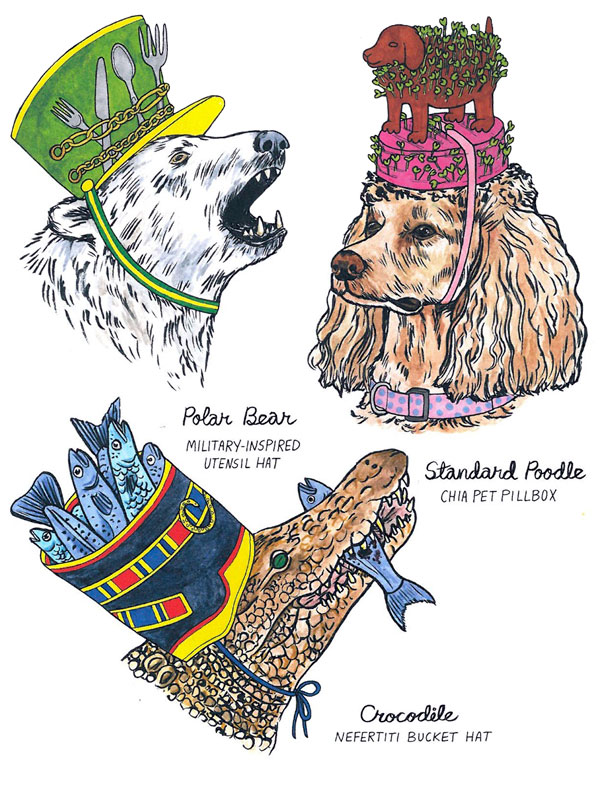 Hanawalt’s embrace of the vulgar alongside a more serious register aligns with the blithe irreverence that she calls upon for so much of her humor. Take an off-kilter observation and run with it for comedic effect, and that’s how you end up with the six pages of photorealistic animal faces donning surreal headgear that is “Fashion Week Animals in Hats” and “North American Wildlife and Hats.” These visual indices, which are so emblematic of her work, resonate with the feel of today’s Internet, where so many of these works first appeared. Her catalogues seem very reminiscent of our BuzzFeed culture of endless lists of humorous sound bytes. My Dirty Dumb Eyes may not be a cohesive narrative, but her comics are no less engrossing than an afternoon spent surfing through cat videos on YouTube.

Margaret Galvan is a PhD candidate in English and a film studies certificate candidate at the City University of New York Graduate Center. She is writing a dissertation entitled “Archiving the ’80s: Feminism, Queer Theory, & Visual Culture” that traces a genealogy of queer theory in 1980s feminism through representations of sexuality in visual culture. Her academic writings, which explore the intersection of critical theory and visual representation of female bodies, can be found in publications like the Graphic Novels (Salem Press, 2012) reference work and in the forthcoming book, The Ages of The X-Men (McFarland, 2013). She teaches in the Gallatin Writing Program at New York University and works as an Instructional Technology Fellow at Brooklyn College. See margaretgalvan.org for further information.