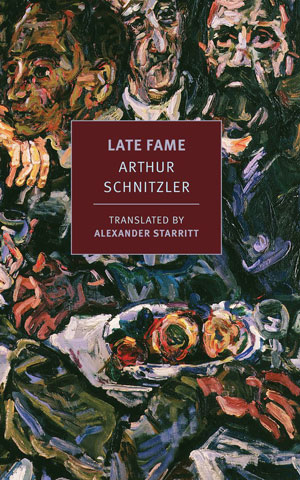 Herr Eduard Saxberger lives in a pleasant apartment overlooking the Vienna Woods. Each night after spending the day in his civil service office, he eats at his usual restaurant where he interacts little with his companions beyond small talk and basic requests, and goes for a walk. His life is stable, if a bit empty. But one day a young man named Wolfgang Meier appears at the door, clutching a copy of the Wanderings, poems by Eduard Saxberger, and the somewhat bumbling, bourgeois civil servant is thrown back into a past he hardly remembers.

And so begins, Late Fame, Arthur Schnitzler’s satire of Fin de Siecle Vienna, published in the U.S. for the first time more than a century after it was written. Just barely hitting the hundred page mark, Late Fame is short, even for a novella, but Schnitzler’s writing is powerful in its simplicity. Characters and images are pinned up like butterflies on a cork board. Alexander Starritt’s translation from the German is clear and graceful as well, retaining some of the ineffable air of Germanic grammar, commas cutting and stitching together clauses with a clear precision. Take Saxberger’s meditation, after spending some time with the small group of artists and intellectuals that Meier introduces him to: “And it seemed to him that he belonged among these people. As if much of what they said of themselves was also true of him and as if he, too, still had battles to fight as they did.”

Much of the novella takes place in the shadow of this group, “Enthusiasm,” into whose clutches Meier slowly draws Saxberger. The group meets each night in a coffeehouse, where they label anyone who’s had success as a sell-out while paradoxically bemoaning the fact that the public pays no attention to them. There is much bickering and gossip and name calling, and no writing of any kind. In fact, very few of them ever seem to produce, except a small, timid man named Winder who is ridiculed for the fact that he likes to write all sorts of things and seems to have little trouble forcing himself to sit down and do it.

At one point, Saxberger asks why they are calling a certain table “talentless,” and he receives this droll response which perfectly sums up the whole group: “‘Talentless,’ interjected Meier in his calm way, ‘is what we generally call those who sit at different tables from us.’”

These moments in the coffeehouse prove that Late Fame’s real targets are not the aristocrats or social values lambasted in English satires like Vanity Fair, and works by Oscar Wilde, Charles Dickens, and later Evelyn Waugh. Instead Late Fame zeroes in on the posturing hacks, the (mainly) men who call themselves artists and wear all the trappings of the title, but do none of the work. As Saxberger admits to himself once he’s gotten to know Enthusiasm better, “They assuredly had a tremendous amount of talent between them; work, however, was something they actually did very little of.” 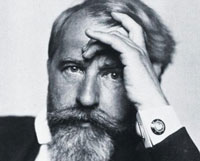 Arthur Schnitzler, as the back of any copy of his books will tell you, was part of a Viennese circle of intellectuals and artists that included Sigmund Freud and the writer Stefan Zweig, whose memoirs provided much of the source material and inspiration for Wes Anderson’s recent film Grand Budapest Hotel. The story of Late Fame’s manuscript itself wouldn’t be out of place in one of Anderson’s kaleodoscopic plots. Finished in Vienna in the early 20th century, the manuscript sat in an archive until 1938, managing to survive previous attempts by the Nazis to burn Schnitzler’s work (along with Freud and Zweig, Schnitzler was Jewish).

The novella wasn’t published, even in the original German, until 2014. There is a bizarre coincidence between the subject and title of the novella and its arc through history that is hard to miss. And there are other overlaps between Late Fame and the real world. Much like the characters in Late Fame, Schnitzler, Freud, Zweig, and their group met often in a coffeehouse to discuss their practice and trade ideas. Freud was supposedly quite taken with much of Schnitzler’s work, which is frank in its depictions of sexuality to the point of being scandalous. One of his plays, Reigen, explores the moments right before and after 10 couples have sex. His novella Dream Story was also the inspiration for Stanley Kubrick’s last film Eyes Wide Shut, an erotic drama starring Tom Cruise and Nicole Kidman.

Yet desire works in a different way in Late Fame. While Enthusiasm is mainly made up of young-ish, headstrong men, there is one woman, an actress who is always referred to as Fräulein Gasteiner. Gasteiner becomes one of Saxberger’s loudest champions, lauding the Wanderings and their poet in a loud voice whenever given the chance, providing another driving force for Saxberger’s ballooning ego. Gasteiner is one of the main proponents of putting on a salon night for the group to introduce Vienna to Enthusiasm’s work, and simply insists that Saxberger’s work must be on the program. She comes by his apartment to check on his progress and makes proclamations like “Truly, this is a poet’s study,” in a dramatic voice. Their gazes and touches linger. But the sexual undercurrents are always misdirected and it’s never clear where the line is between sexual desire and desire for fame, power, and attention.

Late Fame’s approach to its titular subject reminded me of the recent case of Vivian Maier, the Chicago nanny and amateur photographer whose street photography, rediscovered in a storage unit, recently spawned a whole cottage industry of books, documentaries, and gallery shows. The photographs, made by a woman who had died years earlier with no direct descendants, were latched onto by new owners who rode to fame on Maier’s coattails, or at least attempted to (the owner of a majority of her negatives, John Maloof, was nominated for an Oscar in 2015 but didn’t win). No doubt the group Enthusiasm hoped they had found their Vivian Maier in Eduard Saxberger. “For today’s generation,” Wolfgang Meier tells Saxberger soon after meeting him, “the Wanderings are the work of a newcomer—because no one knows them.”

After the salon evening (spoiler alert) goes horribly, Saxberger begins to wonder if he was happier before this all happened. Before Meier and his rediscovery of the Wanderings, and the salon and Fräulein Gasteiner. In Late Fame it turns out that there are two kinds of “artists,” those who love to create, and those who love the idea of being an artist. After the salon, Saxberger isn’t sure he wants to be either.

At the center of Late Fame is a question of utility: what (and perhaps whom) is art for? As pretentious as the question may sound, Schnitzler means it quite honestly and simply. The members of Enthusiasm use art for their own self-promotion, Saxberger doesn’t know what to do with it, and no one, really, seems to benefit from it. At the end of the novella, Saxberger mentions to a young writer, “‘Let’s make a deal,’ … ‘You don’t need to read my poems and in exchange I won’t read yours either.’” It’s comforting to think that great art will become famous on it’s own merit, as if it can somehow float to the surface without learning to swim. But sometimes, like Vivian Maier’s photography or Arthur Schnitzler’s little gem of a novella, it sits in a closet for years before being taken out and admired anew. Late Fame, it turns out, is for all of us who ruminate over art, who wonder what purpose it serves, and why, for reasons good or bad, we keep making it.

FIVE STAGES OF GRIEF FOR WRITERS When Dealing with Negative Feedback, a craft essay by Floyd Cheung