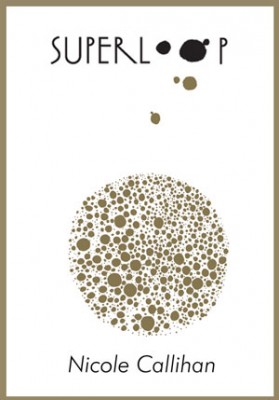 The startling beauty of Nicole Callihan’s SuperLoop lies in the balance the poems strike between the specificity and universality of childhood memory. The strongest poems take us deep into a place of colorful, youthful imagination, full of the unexpected juxtapositions that only retrospection can bring. The poems retrieve those crystal-clear moments in childhood when we make our first brushes with what it means to be a grown-up—a death in the family, divorce, a new word, and ultimately, the realization that our parents are no more perfect than we are. Callihan constantly crushes and compresses those moments of innocence and experience together, as in the the title poem, where she writes “This is the way / the Tilt-a-Whirl ends / not with a smile / but with a nice ass whisper.”

Every poem in the collection is richly textured and intensely visual. The colors of our childhood homes, playgrounds, and titular (“SuperLoop” is the name of a favorite carnival ride) theme parks seem brighter than ever when seen through the lens of Callihan’s poems, an effect that comes from her ability to access childhood, whether in content or in voice. Callihan is able to combine a child’s imagination and focus on the minutiae with an adult’s sense of the scope of the universe, which makes for juxtaposition and associations only possible with this compression of time:

But now I am in yellow, an October flower girl

for my father’s new life. Now in red December,
our mother divorces another man,
but it is still August for us. We are out of seeds,

so we lay on the sidewalk, my brother
and I, and we play dead ‘til almost
dusk… (“Playing Dead”)

The balance of focus in the poems tips towards the simple, the tangible, the sensory, which makes the intensity of the moments of memory stand out all the clearer. The reader is never settled in the poem, our focus constantly shifts between the specific and minute and the “big” moments in a young person’s life. Those shifts are colored by a touch of surreality—just enough to be exciting and not so much as to take over the entire poem—which both smooths over and enhances the jumps in time and adds a certain instability to the memories the speaker relates. We remember events as we remember them, whether we remember them “correctly” or not is irrelevant. The surreality functions not so much as a poetic construct, but as an element of memory itself, equally powerful as the things that at least superficially seem “real”:

I walked back
to the house
which I remember
as paper
though I’m sure
it was brick or stone
or wood, and my mother

was crying because
the orthopedist
was screwing a nurse,
she said,
then explained
that screwing is when
grown-ups kiss. (“The Other Dead”)

The best poems in the collection follow this (admittedly, very-nearly formulaic) approach to childhood memory: looking back on the big, defining moments through the tiniest of lenses.
The poems manage not to blend into one another, however, because Callihan tempers the narrative poems with non-narrative, simple, sensory poems. The strength of these poems lies in the tremendous gaps Callihan leaves for the reader to fill in—we may insert ourselves into the more narrative poems because of a personal experience we share with the speaker, but the non-narrative poems leave wide-open space for us to join Callihan in the poem. The voice in the non-narrative poems is more adult in its sensibilities, and feels heavier and sadder, but loses none of the child’s wonder of the world, which we feel in the richness and sensory complexity in the language, coupled with the rhythm suggested by the short lines and enjambments:

Callihan’s collection leaves us wanting to go back to our childhood with an empty scrapbook and a snow-cone, to ride the Tilt-a-Whirl for the first time since our first kiss, to fill in the gaps in our memory not with the truth but with the imagination. There is grace and hope and extra whipped cream in the darkest places these poems are willing to go, and a fierceness in the memories lit only by neon carnival lights.