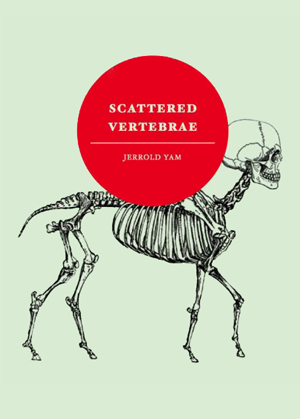 Jerrold Yam’s second poetry collection was titled with care: like the image of scattered vertebrae, these poems are at once beautiful, dark, and disturbing. Yam weaves family life, social expectation, religion, and tragedy together so ornately that at times one does not realize what they’re reading. This technique generally makes for compelling and delicate poetic image, but at times the disorientation feels less deliberate—Yam’s is a poetics that requires rereading, sometimes for the better, sometimes for the worse. It is a poetics of “pleated identity” (31), turning away from singular intent or simple subject matter, and its difficulty reflects the personal sense of unease that Yam confronts throughout: unlike some collections, here one can safely equate the speaker with Yam himself.

Yam’s verse is elaborate, complex by nature, for the poet dives into his own conflicted psyche in a ritual of Freudian digging. He dredges up childhood memory as well as painful scenes of the present day, from his disappointed mother’s mixed acknowledgement of him, to his stricken grandmother with curled body and “feet knotted / in wreaths and bouquets” (89). The book is writhing with sexuality, pulsing with imagery of “the unripe / egg of the female before sperm tongue their way through / its gelatinous down” (50): indeed, the poet seems to have a minor obsession with the womb, seeking, perhaps, his own origin story. 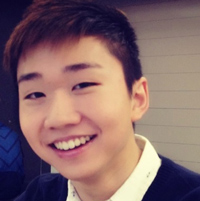 The anatomical fascination that cohabitates with Yam’s social/familial relations begins to fail, however, when the author resorts to explicit sexual description—or worse, dramatized sexual description. His memories of locker-room explorations, a hand job rendered in the seat of an airplane, and so on appear out of nowhere, the sensitive hedging of previous poems yielding suddenly to such excessively wordy lines as “my / beating organ about to froth over its glistening cloak” (66). Perhaps Yam’s eagerness to write about ejaculation can be rationalized as part of the Freudian catharsis discussed above, but bodily attention seems far more effective in this collection when limited to scientific curiosity, rather than what might be misread as fond reminiscence of past orgasms; consider, for instance,  the more poetic “I / survey this cinema of red, / feverishly waiting for a gene to / raise its flimsy translucent palms” (65) or “things stranded in the script of capillaries” (86). Lines like these may not smack of sexual courage (the “unbridled fire” [85] of which Yam seems to revere as a refusal to conform to societal expectations), but they do not compromise the lovely hauntedness of this poetry with distracting imagery as others do.

In Yam’s defense, his sexual orientation appears to be linked heavily to the family discord, and likely the hesitation about religion expressed by “twin criminals of [his] lungs / loaded like doubt in a church” (62), that he transcribes. Scattered Vertebrae is, at its core, a book of loaded poetry, driven by psychological, emotional, and physical desire, placing current events (the Sierre Coach Crash and other tragedies), a mother’s coldness, turbulent romance, and the church on the same sad but enchanting level. Though the imagery is at times heavy-handed or overwrought (“her limbs propped along the bedstead / like bags of dormant muscle” [100]), its intensity is quite often appropriate for Yam’s dark subject matter; if, as the poet asserts, “All that is beauty is also ruin” (95), he has certainly mastered the art of sorting through the rubble. He writes, “I don’t know / of sorry and thank you and I / love you — their foul simplicities” (48), and seems to prefer it that way, the book a genuine celebration of life’s perplexing lots.