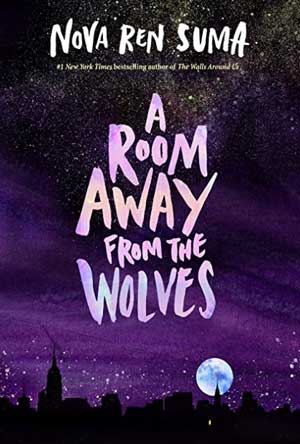 A ROOM AWAY FROM THE WOLVES
by Nova Ren Suma
Algonquin Young Readers, 304 pages

The title of Nova Ren Suma’s gripping new book, A Room Away from the Wolves, refers to its central location, but also to an unobtainable promise: a place where a girl can go to be truly safe. This novel resists easy categorizations. Not just a ghost story, not just a coming-of-age story, A Room Away from the Wolves will leave readers questioning the notion of safety in a world where the most dangerous enemy is one’s own past—and double-checking dark corners of the bedroom before going to sleep.

Eighteen-year-old Sabina “Bina” Tremper has grown up hearing her mother’s stories of Catherine House, a boarding house in New York City where she lived for one glorious summer. Bina believes that Catherine House is a refuge—a room away from the wolves. In her mother’s stories, girls at Catherine House shun the outside world in favor of a private, all-female society. It sounds like a fairy tale: “It was red-bricked and eyed with many windows, gated and safe from fathers and ogres and other intruders … I imagined it nestled deep on the island somewhere, waiting for us with a light on and a cracked-open door.” Interestingly, for Bina, always an outcast, the wolves she wants to escape are other girls. Bina’s tormenters ambush as a pack, led by her vindictive stepsisters. They kick her with bright sneakers that “glow in the dark like teeth,” and as she flees through the woods that surround her suburban upstate home, she hears “howls carrying through the air.” A Room Away from the Wolves resists labeling adolescent girls as bullies or victims; they exist fluidly as predators, escape artists, saviors, thieves, destroyers, and creators all at once.

Bina soon runs away from home and makes her way to Catherine House, where the other boarders eye her with suspicion and only occasionally let her into their rituals and secrets. Although girls in Catherine House disappear from the outside world, the house itself holds them in close scrutiny. The house’s mysterious founder, Catherine de Barra—herself just 18 years old when she died—watches over the girls of the house from an eerie portrait, and there are rumors that she continues to visit the living. It soon becomes clear that the other girls want something from Bina that she may or may not be able to provide: escape. The strict curfew binds them to the house in a way that is much more permanent than Bina realizes. Leaving Catherine House means facing the violence and cruel surveillance of male-dominated society, but staying in the house means giving up individual passions in favor of a group identity. 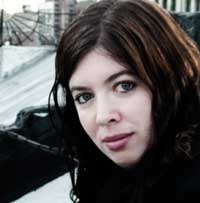 The themes of escape, safety, and disappearance develop in surprising ways as the plot unfolds. Bina’s mother lives a comfortable suburban life, married to a good man, but she would leave if only she had the money to survive on her own. When Bina arrives in New York, she meets Monet, with whom she shares an instantaneous and intense connection. Although Monet is desperate to leave Catherine House, she cannot manage to get any farther than the fire escapes. Like her mother and Monet, Bina navigates the tension between her desires for security and freedom; Catherine House is, above all, a safe place that blocks out the dangers of the world. But this sense of protection is entrapping. The outside world may be dangerous, but it also offers possibility. Manhattan is the physical manifestation of all Bina’s aspirations. The city tantalizes her with its proximity but remains unreachable, making Bina a perpetual outsider.

Bina is a reluctant narrator. She guards her secrets, doling out information as she remembers it or as she believes it to be relevant. Certain incidents are retold several times, the details changing with each iteration as Bina comes to a fuller understanding of her own life, her mother’s sacrifices, and the way their paths intertwine. As the narration moves back and forth through Bina’s memory, it often takes on a dreamlike quality, complete with recurring symbols like a bricked-over door that leads Bina to painful confrontations with her past, and an ageless girl with startling freckles. Suma is concerned with color and rich atmospheric detail. Whether Bina is wandering through the disorienting maze of the West Village or trying to fit in at an evening soiree in the dusty parlor of Catherine House, Suma paints her world in hazy light and shadow, with the blurring hues of a fading Edwardian watercolor.

As Bina cautiously doles out information, Suma skirts the reader’s questions, keeping the novel clipping along. She is less concerned with tying up every detail of the plot than with exploring deeper questions of identity and the cyclical nature of family history. A Room Away from the Wolves is a book for the reader who is comfortable with ambiguity, but others might find the ending unsatisfying. The final chapters introduce new ideas that feel abrupt and undeveloped and leave many questions unanswered and unaddressed. Despite that, this beautiful and well-crafted story is well worth reading for its insightful and piercing look at the ingenious ways that girls manage to escape locked houses.

Rachel Hertzberg is from Minneapolis and is currently pursuing a double major at Bryn Mawr College in English and Spanish.