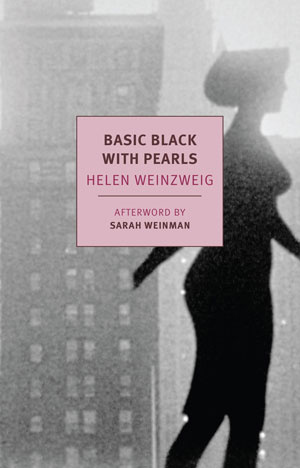 BASIC BLACK WITH PEARLS
by Helen Weinzweig
with an afterword by Sarah Weinman
NYRB, 146 pages

Lola Montez, the protagonist of Basic Black with Pearls by Helen Weinzweig, is a woman gripped by an obsessive, consuming passion for her married lover, Coenraad. To hear Lola tell it, this mysterious man, who works for an unspecified outfit referred to only as “The Agency,” directs her to their assignations by means of a secret code he embeds into the text of National Geographic magazine articles.

The novel opens with Lola in Tikal, scanning crowds of tourists for Coenraad, who always arrives in disguise. He fails to appear, however, and instead, Lola receives a phone call instructing her to meet him in Toronto. She protests: “I can’t go back there… [It’s] where I live.” But eventually she complies, setting in motion a long weekend of waiting that also becomes a hallucinogenic voyage into the deepest recesses of her heart and mind.

First published in 1980 and considered a feminist landmark, Basic Black with Pearls charts the course of the dream-state weekend that ostensibly marks Lola’s return to Toronto. Right at the start of this weekend, casually, in passing, it’s revealed that Lola is not, in fact, the protagonist’s real name. It’s an alias, or perhaps an alter ego; it’s also the reader’s first clue that the novel, which for its first seven pages has seemed plausible and solid, is, in fact, operating on a more fantastic plane. As “Lola” wanders the streets of her hometown, desperate for a glimpse of Coenraad, she proceeds through a series of magically-real interactions that catapult Weinzweig into the thematic territory she wishes to mine.

Born in Poland in 1915, Weinzweig emigrated to Canada at age 10 with her by-then single mother. Poverty, illness, and trauma characterized her childhood and adolescence, and she returns to her early experiences, ascribing similar ones to “Lola,” again and again in Basic Black. Throughout, her particular concern is to examine the forces that prescribe women’s behavior and limit their possibilities: “Here, [in the hotel] as elsewhere, unless I clearly revealed what was regarded as wealth, position, or, at the very least, respectability, I came under scrutiny, direct and indirect, from everyone.” Thus is explained “Lola’s” uniform; her basic black dress with a single strand of good quality pearls conveys just enough affluence, and with it the implied protection of a man, to allow her to move freely, invisibly, about town. 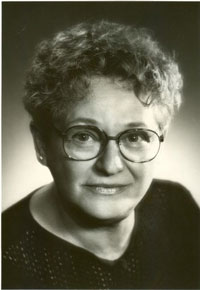 The ability to move freely is not the same as true freedom, however. And the ability to claim and act upon her sexual desire, theoretically a hallmark of female emancipation, is not the same as “Lola’s” being able to attain meaningful autonomy within her intimate relationships. This is a vexing phenomenon, one that’s explored as Basic Black progresses and one that Carmen Maria Machado has recently returned to in the opening story of her acclaimed collection, Her Body and Other Parties.

The first of “Lola’s” surreal encounters occurs in a department store where she decides to pass some time shopping for a silk scarf to enliven her decorous tweed coat. An ill-kempt man, a putative wino, engages her in conversation; elated, assuming him to be Coenraad in disguise, Lola follows him to a secret factory. The factory owner, a Holocaust survivor who saved his own skin at the expense of his wife and children, is in mourning, but “Lola’s” strongest response is not to him. It’s to the female factory workers: “I was tempted to beg to be put to work, to be given a social insurance number, to belong with these smiling women. I could learn their language. I could fit in….”

Desperate to escape the factory owner and his grief, “Lola” flees. But after images of the man and his factory stay with her and “Lola” wishes desperately that she could write as a way to fill her waiting hours: “Come to think of it, I have not been without imagination. I saved stories to entertain [Coenraad] with, and what didn’t actually happen, I invented […] most of my characters were imagined, and the rest speculated upon.”

From this point forward, the rules of the novel are clear. We have entered the realm of distilled emotion and archetypal experience. “Lola’s” interactions may be based in some more-generally-agreed-upon reality, but they will also always be an utterly subjective magnification of that reality, vehicles for exploring the truth of her unique wounds and yearning. “The writer must use words to reach an imagination not being served by other forms of print or by the camera,” Weinzweig is reported to have said. “The reader of his words must be…challenged to explore levels of awareness triggered by his unfamiliar arrangement of words.” In this, the author has succeeded because Basic Black is, in fact, a challenging read. It’s hard to attend as fully to the movements of “Lola’s” mind as would be ideal; concentration can flag and befuddlement can set in. It’s a book that demands to be read twice, if the reader can hang in that long, before any genuine comprehension can bloom.

As the weekend and “Lola’s” wanderings continue, she both longs for her lover and becomes increasingly skeptical that he will arrive. The tension of this conflict propels the story right up until the very end when “Lola” arrives at her starting point, the respectable family home she shares with her husband, Zbigniew, and their two children.

Right then the reader learns that “Lola’s” real name is Shirley Kaszenbowski. It’s at this point, too, that Shirley learns she’s been replaced by a woman called Francesca, a substitution her husband and children have scarcely registered. Francesca invites Shirley to come in, and the two women compare notes. In a distressingly ironic turn, the reader, who has learned by now to distrust “Lola,” has no trouble accepting Shirley and Francesca’s combined descriptions of the cruel circumstances inside this house as not only realistic but also entirely real. Over the course of their evening together and as the two women talk, Zbigniew is revealed to be a brute from whom Shirley has fled in “a taxi to Emergency, wearing a raincoat over her nightgown, her hair uncombed…” She is not just back from Tikal, in other words, and Coenraad has likely been an invention all along, the spirit guide Shirley needed to escape a man who struck her, whipped her and wouldn’t look at her when he forced himself upon her “every Sunday of the year, year after year.”

It’s a bleak vision, in the tradition of The Awakening and To the Lighthouse. Unlike Edna Pontellier and Mrs. Ramsey, however, and recalling the factory women in their room full of rainbow silks, Shirley finds the courage to seize “a certain silk dress […] in slashes of red and blue and yellow on green background” and to leave, insisting to Francesca that she no longer belongs in Zbigniew’s house. She has a bead on a new lover, so her sanity is still in doubt, but in her parting assertion that she “will not miss being a stranger from whom nothing is wanted and from whom nothing is expected” there is hope that she might also find a purpose, and that in so doing her long, aimless time of waiting will finally come to an end. 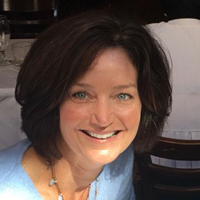 Jodi Monster is an aspiring novelist and founding member of Our Writers’ Circle, a thriving and diverse community of emerging authors. She lived and raised children in The Netherlands, Texas, and Singapore before returning to suburban Philadelphia, where she currently lives.