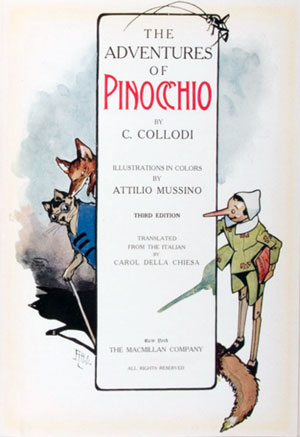 The Oldest, The Newer, and the Four Pinocchios

The Pinocchio in the book on my lap is not the persistently gullible feather-in-his-cap Disney version with the Jimmy Cricket conscience and the wish-upon-a-star existence.

My Pinocchio—La storia di un burattino—comes from the mastermind himself, the Italian serialist Carlo Collodi, born Carlo Lorenzimi, who didn’t start writing for children until late in life. He’d been in the seminary as a young man. He’d volunteered in the Tuscan army. He’d written satire, translated fairytales, and by the 1880s, it would seem, he was primed for his most memorable creation.

You don’t have to stretch to note the parallels that dominate our news cycle. Donald J. Trump was prefigured more than 130 years ago.

If Disney’s Pinocchio is an affable, pliable ingénue who was reconfigured, according to the lore, to look more like a boy than a puppet, Collodi’s is an anti-hero—a wooden thing with barely any ears who mostly can’t see beyond his own nose, no matter its current proportion. He is persistent, insistent, impossible, exasperating, willfully obtuse, a regular screw-up. You don’t have to stretch to note the parallels that dominate our news cycle. Donald J. Trump was prefigured more than 130 years ago. He was augured by a satirist who was most supremely skilled in imagining poor, and poorly curbed, behavior.

My 1926 MacMillan edition of Pinocchio was translated by Carol Della Chiesa and illustrated by Attilio Mussino, who found the character overbearing, spectacularly needy. “He came to live in my study and, after that, never left me a moment,” Mussino wrote. “He literally dogged my footsteps, following me everywhere—along the streets, into the theaters, to my luncheon.”

How desperately well we know that feeling. How hard it is, we find, to look away from the sort of character who does not want to learn, does not want to work, does not like the truth—who is, in short, an opportunistic groveler who sells most anyone who might shine a brighter light infuriatingly short. 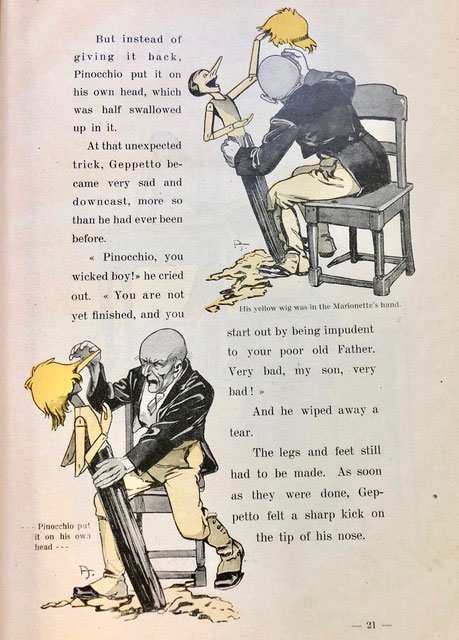 Right at the start Pinocchio is stealing Geppetto’s orange-yellow wig—trying it on for size, riling the marionette maker. A few pages on, and there Pinocchio is, smashing the head of a friendly cricket with a hammer. “Woe to boys who refuse to obey their parents and run away from home,” the cricket had said, a few beats ahead of the puppet’s violent temper tantrum. “They will never be happy in this world, and when they are older they will be sorry for it.”

But Pinocchio—that’s the thing—is never actually sorry, not, at least, over the course of the book’s first few hundred pages. He might say the right words, on a very rare occasion, but when the chance to do the wrong thing again presents itself, he’s all in. He veers from one bad choice toward the next. His friends are unseemly, they are riff-raff, they are swamp. His actions are self-serving, but he can hardly save himself. 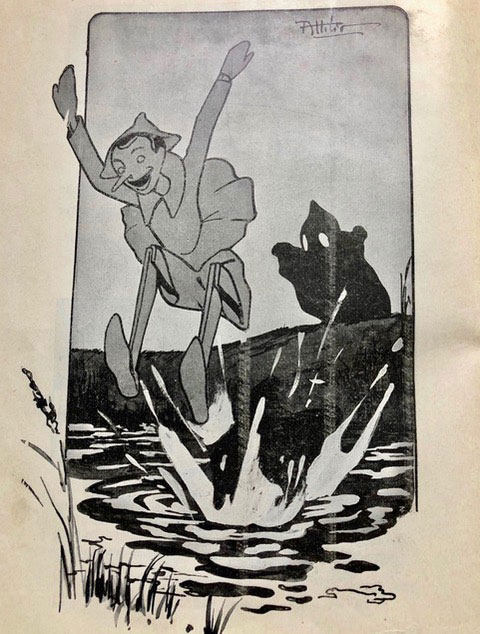 Here’s a scene: Pinocchio, after a stint in jail, has (for will he ever learn?) been out stealing grapes. Hapless as always, he is snared by a trap. Released by the farmer who set the trap, Pinocchio is brought to the farm, chained like a beast, and told to guard the chicken coop. “I deserve it! Yes, I deserve it!” he claims, feeling sorry for himself, playing the victim.

Pinocchio will say whatever’s necessary to get out of the jam. If he had Twitter, he would Tweet it. But it’s not long before he’s out and about again, doing whatever he pleases.

“I have been nothing but a truant and a vagabond. I have never obeyed any one and I have always done as I pleased. If I were only like so many others and had studied and worked and stayed with my poor old Father, I should not find myself here now, in this field and in the darkness, taking the place of a farmer’s watchdog.”

Pinocchio will say whatever’s necessary to get out of the jam. If he had Twitter, he would Tweet it. But it’s not long before he’s out and about again, doing whatever he pleases. 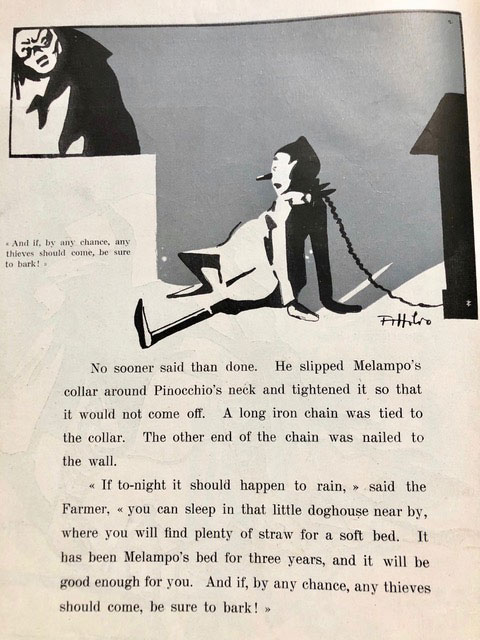 Case in point: After a mild attempt to locate his father, Pinocchio finds himself on an island, looking for “places where one may eat without necessarily being eaten.” Pinocchio, make no mistake, would rather beg to eat than earn the right. It’s only after he is outright starving—and promised bread, cauliflower, cake, and jam—that he agrees to carry a woman’s jug on his head. This lovely woman, as it turns out, is a fairy he’s met before—a fairy Pinocchio claims to love. Sated and instructed, he promises her that he’ll be good now, for real. But the grifter is no promise keeper. More bad company. More bad choices. More trouble afoot, and mostly of his own making.

“Four Pinocchios” is, today, the measure of a Trump whopper, according to the Washington Post’s intrepid fact-checking reporter, Glenn Kessler. It is a construction built on a satirist’s tale, a drubbing named for a character whose lie-lengthened nose must, at one point, be sawed off by a troop of woodpeckers. “I am a rascal, fine on promises which I never keep,” says the original Pinocchio in a moment of truth. 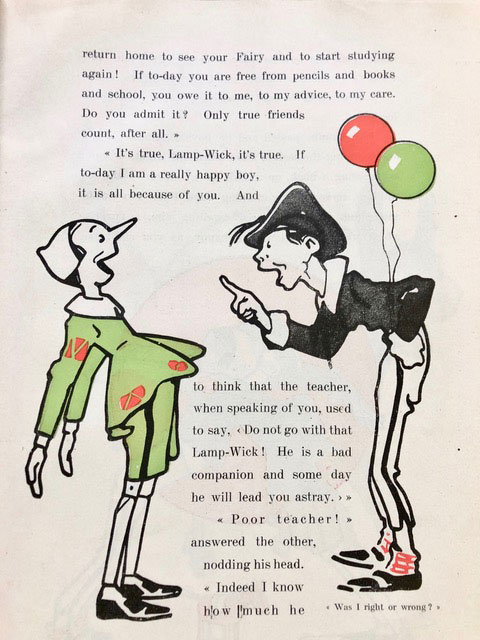 Collodi ties Pinocchio’s momentary episodes of despair and self-reflection to uncomfortable consequences. When, for example, Pinocchio catches “donkey fever” after months of irresponsible behavior in the Land of Toys with his irascible, Putin-esque side-kick, Lamp-Wick, his ears grow long as “shoe brushes.” Again he succumbs to whining remorse: “‘Oh, what have I done? What have I done?’ cried Pinocchio, grasping his two long ears in his hands and pulling and tugging at them angrily, just as if they belonged to another.”

But Pinocchio will have to endure this bout of remorse, for—overwhelmingly long-eared and four-footed and shaggy now—the transformed marionette is bought by a circus owner. The circus man teaches his new donkey tricks and then announces him to the world: “Great Spectacle To-Night… First Public Appearance of the Famous Donkey Called Pinocchio.” 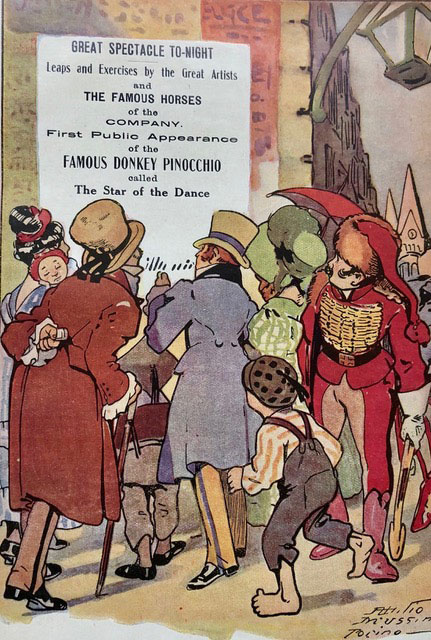 Then: “That night, as you can well imagine, the theater was filled to overflowing one hour before the show was scheduled to start. Not an orchestra chair could be had, not a balcony seat, nor a gallery seat; not even for their weight in gold.”

It sounds, well, an awful lot like a campaign rally.

Four Pinocchios” is, today, the measure of a Trump whopper, according to the Washington Post’s intrepid fact-checking reporter, Glenn Kessler. It is a construction built on a satirist’s tale, a drubbing named for a character whose lie-lengthened nose must, at one point, be sawed off by a troop of woodpeckers.

By the end of Collodi’s Pinocchio the marionette has ceded to the fundamentals of humanity—learned the value of work, learned the essence of compassion, learned the beauty of being brave on behalf of others, rescued, from the belly of a shark, himself and his long-suffering father. He has willingly sacrificed for the fairy, now lying ill. He has wanted to be forgiven, and he is. For all his antics, he has ultimately been redeemed. Even that back-from-the-dead cricket approves his transformation.

Pinocchio asks: “I wonder where the old Pinocchio of wood has hidden himself?”

“There he is,” answered Geppetto. And he pointed to a large Marionette leaning against a chair, head turned to one side, arms hanging limp, and legs twisted under him.

After a long, long look, Pinocchio said to himself with great content:

“How ridiculous I was as a Marionette! And how happy I am, now that I have become a real boy.’”

Such is the stuff of fairytales. 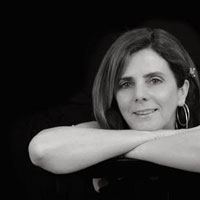 Beth Kephart is the award-winning author of 22 books, an adjunct teacher at the University of Pennsylvania, and co-founder of Juncture Workshops. Her new book is Wild Blues. She can be reached at www.bethkephartbooks.com

EMBRACING UNCERTAINTY, Part 2 of Two A Workshop to Jumpstart Your Writing, taught by Tricia Park | May 9-30, 2021

TELLING TRUE STORIES, a Workshop in Creative Nonfiction, by Sydney Tammarine | May 10 to June 11, 2021

What I Learned from Jennifer Egan’s Use of Sensory Detail, a Craft Essay by Sandy Smith

What I Learned from Jennifer Egan’s Use of Sensory Detail A Craft Essay by Sandy Smith On a friend’s repeated urging to read Jennifer Egan’s 2010 Pulitzer Prize-winning novel Visit from the Goon Squad, I ... Read More
January 25, 2021