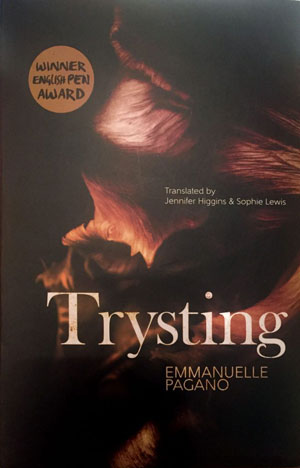 Emmanuelle Pagano’s Trysting is an intimate romance among hundreds. This book of fictional fragments, each in the first person, features character after character—most of indeterminate gender, age, and history—falling in and out of love. The self-contained pieces range from one sentence meditations to several hundred word flash fictions. The shortest of these could be writing prompts, while others read as prose poems. Reading Trysting can, in fact, be like reading a book of poetry, and it benefits from slow, thoughtful study. You could linger over any one piece, reread it and taste the rhythm, the carefully chosen words.

The deliberate and emotionally dense Trysting is representative of the kind of writing that earned Pagano the European Union Prize for Literature and translation into a dozen languages. But this is the first time Pagano has been published in English, and Jennifer Higgins’ and Sophie Lewis’ interpretation is a piece of art in its own right. Though they lose some nuances of expression and must forfeit some of the clarity of the French, Higgins and Lewis successfully reimagine the poetry and intensity of the original.

Some turns of phrase will make you sigh with the romance of them. A woman in one story “caught hold of a big, bright yellow balloon, pressed the opening to my lips, and let it deflate slowly, breathing in his air.” Simple clothes become “cloth for her body: cotton, wool, silk, nylon, linen, anything; it’s all thigh cloth or knee cloth, wrist, neck, or stomach cloth.” Other images hit your chest with the sadness of love dissolving. One narrator never washes his windows after his girlfriend leaves him because the “marks of her palms and fingertips are still on the windows, clearly visible when I put my mouth close and exhale, when I bring them out with my breath.”

The book is also undeniably playful. Characters laugh together in embarrassment. They have sweet nicknames for each others’ habits: a man calls the little grease bumps in his wife’s hair “cherries.” Another takes loving photographs of his partner’s nail clippings. Some stories veer into the surreal, like the one about the man who “would die regularly, every two or three years” and then revive with scars, traces of his violent deaths. Or the story about the character who stretches a string from the hospital bed of a deceased lover to their bed at home “in order to catch his soul.”

Though the stories are not divided into sections, and I can find no overall story arc or plot, themes reveal themselves. Wanting is expressed in music: a woman loves an accordionist who “[t]o make music […] was embracing the air, welcoming the empty space […] I found myself filling that hollow, those great bellows, his musician chest.” For a former lover, “My memory of him is the stretched skin of a drum. At the slightest touch, it vibrates and resounds.” Another musician complains that his crush, who lives upstairs, and her boyfriend “always screw to the same rhythm […] same tessitura, same component parts.”

I list these scenes to give the reader a sense of the suffocating nature of Pagano’s book. Emotions pile up, rocky and unstable. This, combined with the fragmented form, make Trysting a book of chapter endings. There are so many last sentences, each a moment or revelation or turn of phrase to be pondered, that the book begins to feel overwrought. 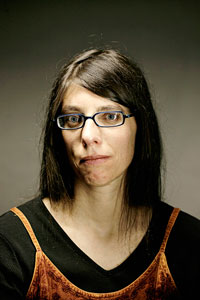 At the same time, because each piece is in the first person, the narrators begin to blur together from one story to the next. The female point of view in one story bleeds into the next. The narrator’s gender is rarely clear, so that we don’t know if the relationships are heterosexual or homosexual or meant to represent something else. This effect seems intentional, and as I got farther into the book, I began to see it as an exercise in exploring queerness. We can’t identify a gender, and it doesn’t matter. Interestingly, though, this doesn’t quite align with the reading of the book in its original French. In French, gender is more visible in the language. Adjectives often reveal the gender of the noun they describe, as do certain verbs, with an additional “e” at the end if the noun they are describing is female. A narrator that describes him or herself commits to one gender. Because this isn’t the case in English, the translation affects something that the original could not: it obstructs heteronormativity by making it impossible to identify most narrators’ genders.

The English title of the book, Trysting, is also vastly different than the French title, Nouons-nous. The latter more literally means, “let us bind ourselves together.” The verb “nouer” can describe how a plot comes together or how fingers intertwine when two people hold hands. It can be translated as “to build,” “to develop,” or “to knot.” The letters in Nouons-nous seem to be tangled together themselves, and the phrase has an alliteration and internal rhyme that presage the poetry of the book. The title change also denies the reader the rewarding moment of discovering the title within the text. In the original French, the verb nouer can be found in the third story. A teenage boy, disallowed from seeing the girl he loves, visits the girl’s parents’ carefully arranged orchard in the middle of the night. To get his revenge, he and his friends pick every fruit and “attach” (the verb nouer) their stalks to the branches of other trees, swapping them so that apples hang from pear trees and cherries from fig trees. In this context, the titular verb becomes a reference to things both deceptive and playful, young love won and denied and reclaimed. In French, the title is an active verb, both a command and an invitation to the reader: come bind yourself with us. Come play.

Rachel Taube works and writes in New York. She has been an Electric Literature-Catapult Scholarship recipient and a Tent Creative Writing Fellow, and she holds a masters in Creative Writing and Gender Studies from the University of Pennsylvania. You can find her fiction in Storychord and Apiary Magazine. Follow her on Twitter at @racheltaube.

ROMEO AND JULIET IN PALESTINE: TEACHING UNDER OCCUPATION, a memoir by Tom Sperlinger, reviewed by Beth Johnston