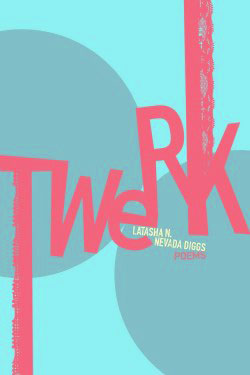 The challenge in reading sound poetry is to try to grasp the full depth of the work’s significance without having the performance as a guide. The challenge for the poet, then, is to craft work of equal aural, intellectual and emotional stimulation. In her first full-length collection, TwERK, LaTasha N. Nevada Diggs creates seemingly infinite layers of meaning that meld to produce critical social statements on both a global and region-specific scale. Certainly, experiencing her interactive performance adds nuanced shades of perspective, but the poems themselves are wealth worth reading.

Diggs’s lingual acrobatics often focus on syncretized cultural elements that speak to a new societal fabric. Opening the collection with a verse from “Genesis” that refers to a monolingual world, Diggs then plunges us into Babylonian chaos. She entitles the first section “anime”—those of Generation X and beyond will know that anime combines elements of American pop-culture and Japanese characterization—and the first poem of the section discusses a Japanese subculture that glorifies a modern version of blackface: extreme tanning. Many poems in this section explore the simultaneous sampling of Black American culture and rejection of Black American physiology. Who knew, for example, that there is a Hindu term for “nappy?” 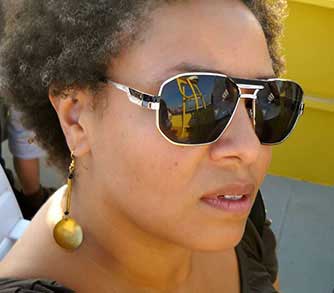 Another motif throughout the collection is code switching. Code switching refers to the necessary practice of alternating between languages within a single conversation—necessary either because one language lacks the vocabulary needed for full expression, or because the audience will understand some concepts better in another language. James Joyce pre-dates the term but not the practice; Finnegan’s Wake is 672 paperback pages of constant code switching within each sentence. Diggs furthers the modernist sensibility that all language is worth reading, and that each individual’s story is better told in the language that the individual speaks, by investing each poem with multi-lingual weight. Frequently, she switches languages two or more times within a single line, forcing the reader to move slowly through her metaphors, the better to absorb them. This serves the dual purpose of teaching the reader how it feels to lack understanding because of language barriers. Indeed, the second section is entitled “no te entiendo,” which translates to “I don’t understand you.”

The constant and vibrant mixture of ethnicities and languages that Diggs demonstrates is also the trademark of New York City. Nowhere is this more evident than on the subway. In “metromultilinguopollonegrocucarachasblahblahblah,” Diggs effectively creates an interactive sigh/sound installation. Every train does have someone singing “hoarse covers of lean on me.” There is no hierarchy on the train, really; the low-rise jeans craze has yielded scenarios in which “peek-a-boo buttocks frazzle orthodox ringlets.” We hear the blend of tongues, “Yiddish over Korean” and jewelry pronounced “jury.” We see the spectrum of wealth: “Old Navy dressing room style” vs. “Senegalese feet in gold slippers” vs. “Nihongo in Prada,” all of which unify in remembrance as the train nears the World Trade Center: “the metropolis subverted/of all subverting time.” The poem lays bare the paradox: NY is many; NY is one.

Diggs delves deeper into the socio-political fabric in “mug shot pedigree,” in which she exposes prison system’s objectification and animalization of its subjects. It begins as a list poem, moving from basic adjectives: “brown,” “bald,” “average,” to the stereotypical and purposefully offensive: “40 ounce,” “kunta kinte, “baby Daddy.” It ends by referring to the subject’s parents as “Sire” and “Dam”—livestock breeding terms—in place of “mother” and “father,” and stretches the offense further by listing several possible “sires.” The poem echoes society’s dehumanization of Black American men.

TwERK combines Joyce-ian aesthetics with the uncompromising realism of Morrison. The collection celebrates the beauty of language, and lauds language’s interdisciplinary use, while highlighting the cultural significance behind the words and their appropriation.