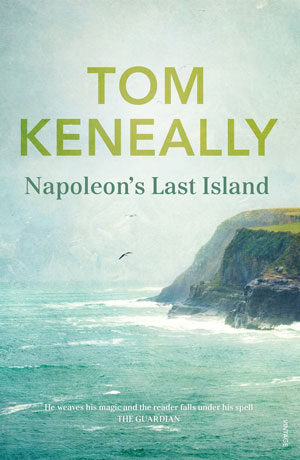 Napoleon’s Last Island takes place on five-by-ten-mile island of St. Helena, where Napoleon Bonaparte, the infamous conqueror of nations, was exiled after being captured by the British. Napoleon’s actions may have warranted him jail or the guillotine, but, as this fictional account tells it, he requested consideration for asylum in the British countryside, and was left on the island while his captors decided what to do with him. St. Helena was chosen because in part it was far from anything important, “halfway between Europe, Africa, and South America. This is the deepest pocket they could find to put the Universal Demon in.”

Based on the synopsis (conquered conqueror stuck on island hesitantly befriends by young native girl) and artwork (an ocean crashing into the bottom of seaside cliffs) on the book jacket, I expected in part to read the account of an aged, brooding, and isolated man pacing away his final days on an isolated rock, sometimes tolerant of, sometimes avoidant, sometimes thankful for his friendship with a young girl who lives there. For better, and for worse, I found something else.

While Napoleon plays a significant role in the story, the book centers around and is narrated by a fictionalized Betsy Balcome, who inhabited the island as a young girl while Napoleon was held there, and later published her accounts in a book, Recollections of the Emperor Napoleon. Napoleon’s Last Island was written by Thomas Keneally, author of Schindler’s Ark (the basis for the movie Shindler’s List) and more than 30 other books, mostly historical novels. Keneally shows through Betsy, and a select few other characters, that he is particularly deft in developing an individual voice, and injecting humor wherever he can. “I was careful to sit in chapel by the sort of girl who in somber situations could be set off into hilarity by a mere dig in the ribs,” recalls Betsy. “I was a watchful rebel,”

took what I could, and for the rest, kept myself warm with contempt. I did not evade complete censure and was frequently asked why I was not more like [my sister]. The question seemed to cause her more pain than me.

But Keneally’s narrative structure often plays against this precise characterization. Throughout much of the book he pairs characters, bashing them against each other until something sticks. This makes the characters feel interchangeable and nondescript. 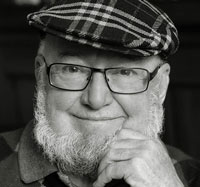 All this, however, helps shine the clearest light on Betsy. She’s the most interesting thing in the book because she is so confidently, defiantly, and consistently a young woman of her own, regardless of circumstance, among flighty adults who make big concerns of small matters just so the reader can notice they exist. Betsy is young, sharp of mind, frank of mouth, unusually aware for her age (though sometimes inaccurately so), feels herself less than no one, and is quick to slight anyone who she feels aims to reduce her. Not surprisingly this piques her father. “You see,” he says to her, “you always exact a price. You never bend your stiff neck. Do you think God is amused by your style of obduracy? Where does it come from? It is not a thing of our family!”

Early on in the book, this sort of bristle makes for an engaging read. In this spirit, Betsy and Napoleon commonly trade humorous tit-for-tat dialogue that the young girl takes far more seriously than her seasoned counterpart. She’s confident enough to give the deposed king her view on his lost Russian campaign, and the invasion of Moscow in particular:

“What I’ve been told,” I said to him in a literal way, “was that it was the Russians who burned it down to get rid of you, sir.”

My father and the admiral chocked on some sort of laughter. The man wagged his finger but with a wide, alien smile.

Jane looked terrified. Huge combustions and had been evoked and it was as if The Briars were not safe from them. I had found my voice with this creature, meanwhile, and I resolved not to be treated with the kind of sport he clearly saw me as good for.

But this sort of low stakes verbal sparring soon becomes the default mode of interaction among the novel’s characters. Less than one-quarter of the way through the book, all that flowery tongue-in-cheek prose begins to feel taxing. Beyond dialogue, keen and sweeping descriptions of little consequence seem to take up space in service of themselves rather than the story. Midway through, Napoleon’s Last Island still feels shallow.

The reader who manages to get through the second hundred or so pages will find reward in the arrival of an insecure and ambitious new governor who goes out of his way to make life hell for Napoleon. God bless the prick. He raises the stakes and re-centers the book, giving it newfound purpose and permission to evolve beyond trivial clutter. In fact, a passage describing the villain could almost serve as a metaphor for much of the book up to this point:

And there’s one great thing about that Fiend fellow. He tends to be satisfied as long as you give him plenty of details. He’s more interested in knowing not so much whether the Emperor ate boiled eggs for breakfast than whether they are soft- or hard- boiled, as if their condition is somehow an omen for him.

At first, the conflict between the governor and Napoleon is relegated to the grown-ups. But, eventually, and in a short matter of successions, Betsy becomes a political pawn, is confronted on her brashness, and runs into a hilarious conundrum were she and the reader “encountered a scene so undue, so crowded with people who had burst the limits of my knowledge of them.” If only things had been this interesting earlier on. Here, Keneally builds gripping context out of all the boorish cuteness readers were forced to suffer through earlier. Two continents away, a few power shifts after, and a whole new life removed from the island, we’ve made our way with what seems like another story altogether, nearly powerful and provocative enough to redeem the book.

Nokware Knight is a bibliophile who believes that one’s best days are made of good music, good food, good people, and new places. He hopes to one day travel as much as he reads and believes that a life well lived makes it hard to distinguish the difference between the details of a good journey and a great book.