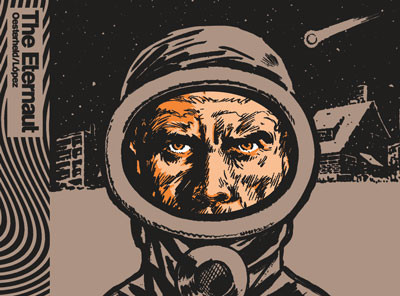 Deadly, beautiful “flakes” falling gently, the bodies they touch folding neatly to the ground. The light thrower, a powerful weapon that spotlights your death, as though stage fright wasn’t real enough. Sinister devices “plugged in” to the necks of robot men, long before The Matrix was even a twinkle in the Wachowski Brothers’ eye.

All of these: combining to form layers of artful threats to your well-being, like different sections of an orchestra imbricated and inter-punctuated to form a unified song. This is the world we enter upon reading the Eternaut’s, also known as Juan Salvo’s, recounted story. More: hallucinogenic, mind-controlling biological warfare, the telecommunication gadgets that dreams are made of, fifth column military pursuits by alien “hands,” enraged “gurbos” and an enemy automaton disguised as an attractive woman. A faraway extraterrestrial empire has designs on colonizing not only as many planets as possible, but also on pillaging the galaxy’s resources by picking pockets of time throughout eternity. Navigating this same eternity is the Eternaut. A displaced person in space, he borrows somewhere to sit from other slots in time, so as not to allow for his own vanishing. Set in “today”—or late 1950s Buenos Aires—The Eternaut, both man and story, arrives like a hologram in the office chair facing writer Héctor Germán Oesterheld. Together with Oesterheld, we are just one stop among many on his sempiternal journey.

The latest installment of The Eternaut predates Gene Roddenberry’s earliest inkling of Star Trek by five years and is most often commercially and critically classified as the epitome of science fiction. Newly translated into English, the famous comic book that was first published serially in the Argentine periodical comics of Suplemento seminal Hora Cero from 1957 to 1959 has now been made accessible to a whole new demographic of readers. 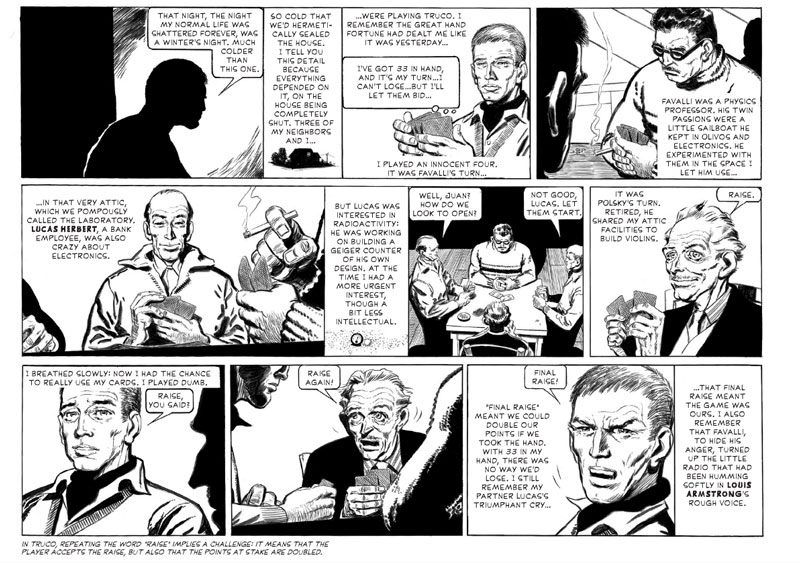 Like most sophisticated works of science fiction, The Eternaut mingles tropes from many a genre, as well as devices from many a medium. Although Oesterheld and even his—dare I say—alter ego, Juan Salvo, cite Daniel Defoe’s classic adventure novel Robinson Crusoe (1719) as a central inspiration, the comic is so infused with Oesterheld’s post-world war world view as well as his actual Argentine political context (namely Juan Perón’s controversial government) that any parallels to 18th century explorer/castaway stories are whittled down to the basic human feelings of loss and the need to survive that find their way into most great pieces of literature. The inventive and believable plot twists, the alternate dimensions and endless permutations of exciting cosmic “gear”—gismos, doodads, contraptions—delightfully remind us that there are no limits to… well, period. There are just no limits in Oesterheld’s imagination. And this is why The Eternaut is, quintessentially, sci-fi.

López’s non-cartoons remain true to the realism of the narrative, and pay homage to Defoe’s markedly—for his time—realistic fiction writing. Like Robinson Crusoe, The Eternaut presents itself as a passed down story, a memoir within a memoir, in which the author himself makes cameo. Comics fans, you may be gobsmacked by the proportional and ordinary-looking characters. But then, this is the comic’s hook: it introduces us to a reality that mirrors our own, even features the author himself as conduit, only to catapult us out of comfort. Still immersed, we confront the same horrors as the characters, and our emotions are very real. The story is riveting, and terror is deliberately cultivated in us by the author’s and illustrator’s stark realism that at first feels so homey and secure.

In this sense, The Eternaut is also psychologically thrilling. We follow the characters in attack after attack. It’s “kill or be killed,” they constantly remind themselves. But the fact that they have to keep telling themselves to kill, to expect the worst from desperate people, is perhaps the most prominent comment about humanity. The Eternaut reveals that we don’t just protect lands and people when we go to war, we protect security itself—the feeling of not having to worry, the luxury of naïveté, the privilege of having enough humanity left over after taking care of oneself to care also for others. 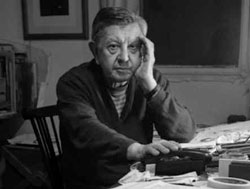 These feelings, the absence of fear that most of us take for granted, is what Juan misses most at the outset of the invasion. Though he adapts to the new demands of his spirit, exclaiming, “…I was ready for anything. Life, madness, death, it was all familiar now” (153), he never forgets the psychological shifting and discomfort of fearing fear itself. This theme is then compounded and substantiated by the alien “hands” whose bodies secrete a deadly substance when they are afraid, so that they literally die of fear.

The Eternaut plays with perspectives, especially the viewpoints of different characters that Osterheld and Lopez themselves inhabited throughout the story’s creation. The villains are complex and offer a mix of relatable motivations behind their evil actions. The heroes likewise reveal weaknesses and flaws that make them feel a lot like us. All are pensive, vulnerable, and nervous, second-guessing themselves and narrowly escaping the darkness of their own inner doom prophets. And beyond deliberate POV genuflection is a fairly plain demonstration of Oesterheld’s unselfconscious and unchecked sexism. The three female characters who are spotted throughout The Eternaut all tend to cry and give meaning to the lives of men by virtue of their need for rescue.

You can hardly blame Oesterheld, as the comics and other cultural material of the day likewise portrayed women as one-dimensional damsels (a favorite fact of mine is Michelle Nolan’s observation that the image of women in tears was so soothing, so gender-affirming to people in the 1950s that it became a paradigm of romance comics, featured on 18 out of 39 covers of a certain popular series from 1955-1958). The Eternaut classically portrays women as either helpless—“surprisingly” still able to prepare chicken in the midst of crisis—or cunning, seductive mirages designed to lure men into traps. Reading the comic from a contemporary vantage point, its treatment of women becomes a primary source of the insidious sexism that prevailed across media in that decade.

Travelling without moving sums up the experience of reading and escaping into The Eternaut. At first, the characters are not transported, but find their world is transformed. The earth no longer provides an environment that is safe for humans, so people must walk its surface like astronauts, alienated, in protective suits. Inner and outer realities succumb to respective rumblings. The Eternaut himself develops as a character in due time, but the stages of his growth are also simultaneously embodied by other characters at all times present, either a few steps ahead or behind him. Time becomes a virus that passes through each of us; such is the not-so-prosaic metaphor that The Eternaut presents.

Natalie Pendergast recently earned a Ph.D. in Comparative Literature at the University of Toronto. She specializes in American, Canadian and French graphic novels and bande dessinée. She is active in creative circles that dabble in various media such as prose writing, drawing, beat poetry, video-making and theatre. She is also the communications officer for the nonprofit Acadian organizations of Prince Edward Island.