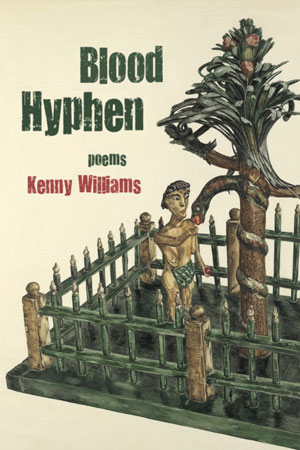 Frost said that, like an ice cube on a hot stove, a poem must ride on its own melting. It’s an apt description of the poems in Kenny Williams’ Blood Hyphen, winner of the 2015 FIELD Poetry Prize. Take the book’s opening poem, “About the Author,” which begins:

The genius of Diogenes:
all his books are lost.
But really that’s the genius
of the books and not the man.
If I can speak for the man,
his diet of worms and onions
makes me feel like a pig
when I go to the store
and it’s midnight
and the store is closing.

Riding on its own melting, the poem proceeds by continuously undermining itself. The genius of Diogenes isn’t really the genius of Diogenes but rather the genius of his books—all of which are lost. So to be ingenious, a piece of writing should not exist—a darkly funny argument that undermines the very act of writing the poem in the first place. The speaker then proposes to “speak for the man” Diogenes—but does no such thing, instead talking about his own experience in the grocery store. But even that experience melts away:

But in the land of the living
midnight means nothing
and the closing of the store even less.

Faced with this erasure of meaning, the speaker turns to the immediacy of sensory experience:

The sensation of the freezer temporarily allows an epiphanic moment of experiencing “both cold ends of the earth at once”—but that gesture is promptly undermined, as the sweeping vision deflates to,

the puke-sweet honey of a wintry spring,
the stink of my weakness
for the luxury of proper action.

As the poem nears its end, we’re left with even more melting away:

At home in the morning I find myself
stacking old ax handles into a pyre
for my chickens, all called Margaret,
and their sire, Mr. Margaret,
torn to shreds in their defense

The chickens are killed by a fox (an erasure), and their remains burned (another erasure) but even those erasures are themselves undermined by the absurd humor of every chicken being named Margaret, the potential seriousness of the tragedy erased by the comedy. But having established this pattern of perpetual undermining, the poem in closing takes an unexpected and haunting turn to the lyrical, describing,

the musk of the vixen
lingering more like violets
than the season should allow.

Having undermined everything, the poem nonetheless leaves us with one experience that manages to persist, despite what “the season should allow.” It has ridden its own melting to one thing that will not melt, and the earlier losses make us cleave to the image all the more.

Or take a poem like “Sorry to Ask,” which begins:

Sorry to ask, but was it funny or sad
that the swan fell in love with a paddleboat?
That the dancer took a thousand leaps
before he took the one that stunned the world?
That the voicemail started out It’s me, just me,
and after that was just words in a voice
you’d never heard before?

You know as well as I do
the swan can’t go on, nursing his first crush forever.
The dancer can’t leap without end in endless space.
And the checking of that mail, whether it’s two seconds
or a thousand years from now, that voice you don’t know
calling all the dead by their proper names?
It’s the same as when you catch up with a friend
at a bar, after “it’s been too long,” and she looks
hard at the ring of water between her hands
flat on the table, and she says, Well…

Here the poem rides its own melting to the point where all things melt: the crush ends, the dance ends, the friend has nothing left to say. The poem wisely leaves us right at that final moment, arrested at the final point of disintegration, forced to always imagine what comes next by those inevitable ellipses.

Not all of Williams’s poems are as successful. Sometimes the zany style feels as if it’s dressing up a lack of substance. Take “Read Me All the Books,” for instance:

Read me all the books
by Anonymous.

Bring me all the head
of Frank Lloyd Wright.

Be my very flower
of discretion. 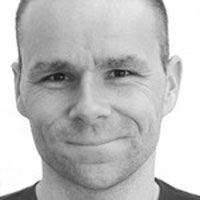 As Stevens said, a poem must resist the intelligence almost successfully. Poems such as this one seem to resist the reader too hard—if there’s anything beneath the wit, the turns of phrase, the zany leaps from image to image—if there’s anything beneath them, I can’t quite find it. To this reader, poems like “Read Me All the Books” read like Dean Young minus the pathos: smart, but cold to the touch.

At his best, Williams makes lovely poems. And happily, Williams is often at his best. Take a poem like “Selected Silences,” which closes Blood Hyphen. The poem’s quiet, stripped-down beauty shows how deftly Williams can handle more conventional poetic modes. The style downplayed, the substance shines through:

When the boy arrived
at the end of the day
a cricket sang its warning
and the boy ran for cover
under the singer’s glossy shell.
The responding silence
of the woods and of the row
of brick apartment blocks
with lights coming on
at the edge of the woods
and of the freeway just beyond them,
dying early on a Sunday…
you can hear these in the songs
the boy will teach himself to sing,
and in these the songs
hear better what they are:
more and better silence
and a singing for the same.

Blood Hyphen is a strong debut. Though some of the poems rely more on style than substance, the book’s overall impression is one of intelligence, pathos, and an energetic sense of play.