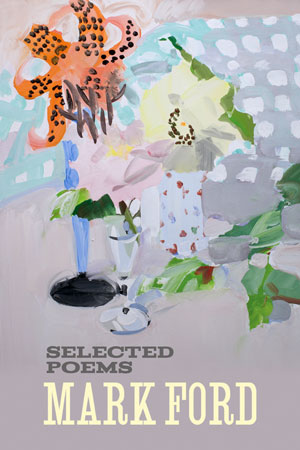 Mark Ford’s Selected Poems is one loquacious houseguest. Appearing unexpectedly at your door one soaked evening, the speaker of these poems immediately pulls at the thread of your surprise as you prepare them some tea. Despite being visibly traveled the speaker is quite chipper, and as the details of their arrival unfold your home crowds with characters from British literature, mythic Roman gods, but also heirlooms—such is the cultural capital of this collection: both of the world and of the self.

While this chronological sampling of Ford’s previous three collections spans twenty-two years, along with new poems, the writing is consistently and uniquely Ford throughout. That is not a remark on growth, but rather Ford’s authority: here is a poet who confidently knows his craft. While there is a twinge of John Ashbery in Ford’s writing—one Ford would not deny, as he is an Ashbery scholar himself—Ford nods to his influence but distinguishes himself in his own right. And this distinction: Ford’s uncanny blend of encyclopedic knowledge and a commitment to the mundane—or rather, a surreal spin on the mundane. Take this passage from “Affirmative Action,” from his 1992 debut collection, Landlocked:

Tiny, endless columns of red-jacketed soldiers
Adjusted their busbys before attacking a farmhouse;

And “White Light/White Heat” blared
From bank upon bank of shuddering loudspeakers.

Ford’s plain delivery serves to accentuate the absurdity of the image: fashionable soldiers, an ambush, The Velvet Underground—these brief lines epitomize a commitment to observation but also imagination and interplay between reality and the mind’s reaction to it. The Velvet Underground reference also hints at Ford’s relationship with popular culture.

While these poems span every landscape, they are cosmopolitan, of western society; one cannot help but feel like a subway passenger aboard a train populated by varied and captivating characters and conversations—but Ford parses the dialogues, the details, and makes sense and philosophy of them. Take this passage from “They Drove,” from his third collection, Six Children:

just terribly, but humorously sang
Jonathan Richman’s “Stop This Car” after each sudden

swerve or rubbery squeal. Once they discussed
the pros and cons of having sex

with Bob Dylan—or a Bob Dylan look-alike—in a Buick
while listening to “From a Buick 6.”

Here is a common theme of Ford’s work: travel, though not just literal. There is a sense of cultural traveling throughout this poem and others, which speaks to humanity’s unavoidable tendency to apply a human, emotional reading to the material world.

Another poem of the road is the eponymous “Landlocked”:

Such awful doubts assailed her in the prairie states—
For days she chewed her favorite gum on the hard shoulder
And whispered her difficult secrets to the wheat
Where game Solomon yelped, and, true to form,
The unmiraculous wheat only rustled through its rosary once more. 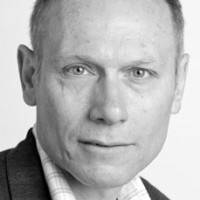 This brief poem narrates a woman’s American road trip and yet turns anything sentimental on its head. The poem contains postcards and famed destinations, but the speaker’s mere listing of them shrinks their literal geography and, as a result, significance. From covering Missouri, Texas, Nevada, and California in seven lines, to declaring the prairie unmiraculous while alluding to religion in another line—with concision and precision, Ford effortlessly typifies an entire landscape and the experience of the lone traveler: small, transient, up to chance, as if everything and nothing is possible and available simultaneously. Fittingly, the poem ends with a question and an answer: the traveler is uncertain of whether she will make it to California’s ocean, and the speaker, the pen pal, asks: “Well why should you, unless of course you want to?” Should the traveling—inward or outward—ever end?

Ending the collection are new poems, which, much like the wanderer of “Landlocked” from Ford’s first collection, continue to trek the globe, but also time (and in the same idiosyncratic style that defines Ford). In “Dark Matter,” the speaker begins in the “estuary mud / of the Thames,” moves to “a shivering / hotel in besieged / Aleppo,” and ends with Tacitus, the Roman senator emerging from a backpack. In this way, Ford bends time and remarks on the simultaneity of all culture; that is, by beginning with the English named “Thames” and ending with a Roman who knew the river centuries before it was so named, Ford makes history a visible, relatable thing. Following “Dark Matter” is “Gaius Suetonius Paulinus,” a historical recount of a Roman general’s victory. But this thread is quickly abandoned and the following poems venture from an ode to 19th century French poet Verlaine, (“Streets II”), to “Show Time,” a piece detailing an attack on the speaker in present day by hooligans on Halloween. In “Show Time,” while the speaker lays on the street straddled by a paramedic, the speaker asks “‘Are you […] / an electric light bulb, and / if so, / what wattage?’” And this reviewer would like to ask Ford the same question, because his poems are nothing short of carefully contained energy.