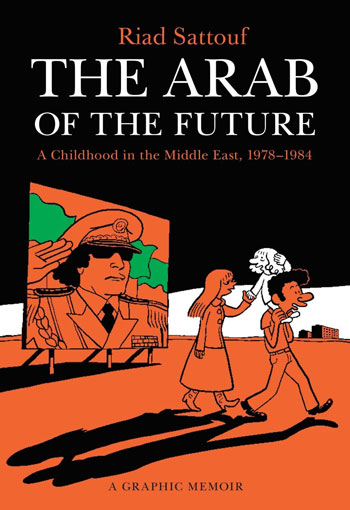 THE ARAB OF THE FUTURE
by Riad Sattouf
Metropolitan Books, 160 pages

As a memoir of childhood, color plays a prominent role in Riad Sattouf’s The Arab of the Future. Different locations and environments take on a range of hues, beginning with the blunt red-black-and-green cover. On it, Gaddafi’s handsome and commanding image on a billboard salutes Riad’s parents as they walk past while he, uncolored, rides his father’s shoulders. He looks to the salute as if it were another adult doting on him, a golden haired child. Over the course of the memoir, scenes that take place in France are colored in blue, while those in Libya and Syria are colored in yellow and red respectively.

Reds and greens also offset memories when contrast is needed to elicit a moment of childhood awareness: the red of Riad’s father Abdel’s radio announcing the political news that directs Abdel and his family’s life, green signaling a televised broadcast of Gaddafi’s state speech in Libya as well as the angry words of a Libyan waiting in line for state rationed bananas, which, too, are colored green, and red for Syrian army berets and broadcasts of Hafez al-Assad’s state propaganda. These seemingly minor details are key signifiers to what is remembered in sentiment even as they recount a larger reality and history.

While chronicling his “childhood in the Middle East, 1978-1984,” Sattouf builds his story around his father Abdel’s journey as an academic and a family man. Abdel’s pride in his Syrian roots and in the Arab world in general is emblematic “of Syrians of his generation,” yet his ideals are often challenged by the realities of the Arab world. In Libya, Riad recalls the socialist vision of Gaddafi and how “housing for all citizens” meant that any apartment was free to commandeer if no one was home or locked inside. Abdel finds this out the hard way when his family is forced to look for a new flat immediately after another has settled into their space.

The daily trips to get rationed food or scenes depicting Riad and his father watching state speeches by Gaddafi and American shows like “Planet of the Apes” evoke an intimacy that offsets his father’s growing narrow mindedness, which arises out of pride and adherence to tradition. For Riad, the adult frustrations of having rationed food and state housing are a mere addition to the everyday stimuli of childhood. Waiting in line for bananas and Tang, his observations of people and their appearances feed his curiosity, as does playing with a toy gun with other kids in the halls of his family’s apartment building. Sattouf renders a Libya that, like his young life, is constantly under construction. 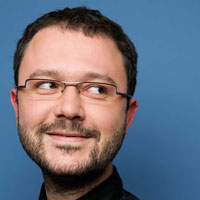 Moving to France after his father’s career takes a turn, Riad is catapulted into another world, with odd people and different kinds of strangeness. Now with his mother, Clementine’s, family, he is treated to a different set of cultural expectations. Clementine from the very beginning seems to be suckered into a relationship with the persistent Abdel. She speaks rarely but, when she does, it’s to set straight Abdel’s inanity. Yet she goes along with Abdel and ventures into a foreign and, to her, bizarre culture. Abdel presents what seems to be abnormal as normal, and he does not apologize for events that could be seen as upsetting to someone not familiar with such a situation and environment. After Riad and his family move from France to Syria, again they are presented with a radically different set of circumstances. Abdel claims he has land, housing, and family that he can rely on and that will make them happy.

While this is partly true, Abdel glosses over the poverty, chauvinism, and harsh realities of living in Syria. Sattouf masterfully presents this contradiction by showing, for example, in one panel a man on the roadside selling Korans wrapped in plastic so as to protect them from any impurities, while on the following page Riad’s family walks past the swinging bodies of the recently executed. Riad observes the hustle and bustle of Syrian daily life as well as the quiet moments that seem at once loving and backwards. 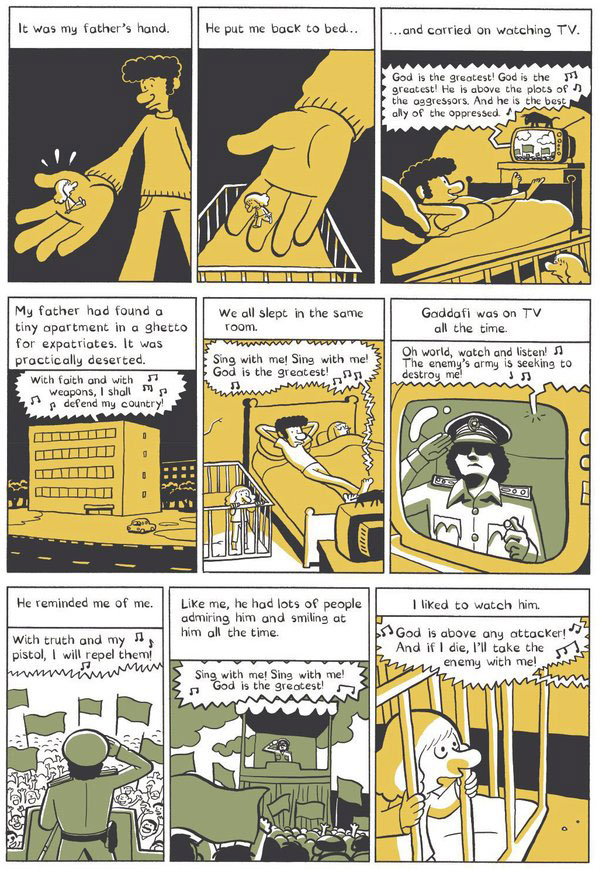 Recalling life in Libya, France, and Syria, Sattouf is able, without judgment, to relay odd situations that are fear inducing, amusing, or whimsical. As a child, his relationships with adults and kids are relatively the same in these different environments—adults give him attention but the kids are weird and he just wants to fit in. Abdel’s guidance is often contradictory and while he insists that Riad will be an “Arab of the Future,” his father falls back into old familial and gender roles that he once proclaimed he would change.

What’s interesting is that the reader witnesses Riad’s fascination, amusement, and confusion while interacting with or observing his father. Sattouf is able to place his memories within a historical context that gives the reader a wider range of understanding as to how his childhood and family dynamics played out in these environments. Drawn simply like Matt Groening’s “Life in Hell” characters, Sattouf conveys childhood innocence and emotion, as well as adult life, in a larger social context, juxtapozing his daily experiences with slices of the politics omnipresent in the Middle East during this time.

While we are centrally reading about a wide eyed, golden haired boy who is in awe of turtles and guns, we are also reading about Abdel and his proclamations, and Clementine experiencing unfamiliar environments with an increasingly unfamiliar husband.