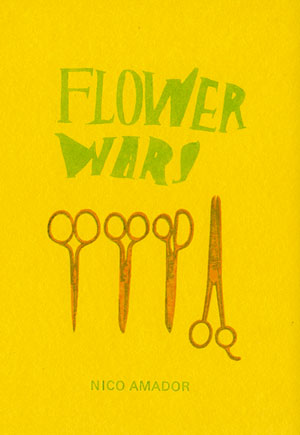 Like a scene is set to music, a vision of the body is set to language in Nico Amador’s poetry collection Flower Wars. In this book, biology is boiled into word, punctuation, metaphor, and syllable, leaving the reader’s understanding of physicality and the human inhabitance of flesh up to a new breed of interpretation— that of one on the page. Moving between prose poems and lineated pieces, Amador addresses hair, gender, Pablo Neruda, shifting personal identities, hummingbirds, and so much more as a central narrative through-line begins to surface between stanzas.

The opening poem of Flower Wars, “Self-Portrait With Cropped Hair,” borrows its title from a Frida Kahlo painting and begins with the statement “There is the dream of exposure and then there is the act of it—” immediately drawing a boundary between rumination and action and perhaps also putting the poem itself, as a form that works an invitation to thought, into question. The reader, if familiar with Kahlo’s painting, can call to mind the image of Frida in a suit and bearing a short, traditionally masculine-coded haircut. The image and the painting are stationary, not unlike Amador’s poem on the page, however, the lines which detail the process of actually cutting hair: “I went knifing through” and before that, “I cleared the trails of my scalp” re-invoke the process and the action which sit tucked behind the result— the short haircut. This layering, emphasized by the poem’s final line “my hair, now metaphor, is meaningless” invite the reader to both understand the cut as an act of self-authorship and autobiography as well as something which perhaps finds its relief by lapsing into a still image, in rejoining the body, and coming to abandon overt symbology to sink back into an element of someone’s personhood.

As the collection opens with a piece that casts the self as something capable of being authored and created rather than being static or inherently given, so too does it continue to reinforce this concept with different language as it progresses. For instance, the poem “Elegy for Two” opens:

You left me a name I could use on men I want to take home at night, a name of raw honey. 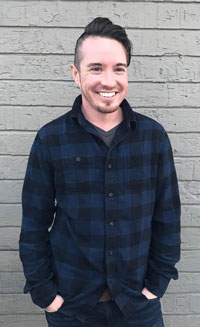 This beginning sentence suggests a sense of a created self, but one made and shaped by something outside of the self’s own body, a tool given by a “you” for an “I” to use in self-address and introduction to others for a specific aim. The name is thereby contextualized in a narrow set of parameters, and, even better, is omitted from the reader except in its being described as a floral-dependent and created sugar. Here, these occlusions both show and curtain the self which the poem is describing. We are given an outline that both asks and answers questions about this poem’s speaker. The piece concludes: “We are citizens/ of the countries we imagine. We make our homes in the dark.” A set of lines which might work to communicate that an occlusion and a lack of clarity can be a place to keep both a name and a body; that neither a sharp diagram of name nor anatomy is required to believe that a person has been here and inhabited this space, these words, and that sugar.

In “Before Surgery,” the collection arrives at a significant place in its possible plot, a vantage point from which the reader can see and comprehend the sense that a reoccurring narrator is occupying the lines and will resurface later, near the collection’s end, to detail an aftermath of this referenced surgery. “Before Surgery” describes a speaker’s time spent in anticipation of a gender-reassignment operation. It’s third stanza reads:

Everything feels disposable—
these cups, the shortening distance
between us, that shirt you’ve taken off
and added to the pile of things we’ve left
behind. It rises slowly, like a mountain.

These lines impart both a sense of rising suspense and importance— the construction of something built from refuse, as well as something ultimately casual and day-to-day about it all. Yes, we are given a mountain and the knowledge that something “big” is on its way, but that mountain is also made of objects like thrown-off shirts and presumably other interesting but mundane moments of human life. This coexistence between height and banality expertly brings the reader into the possible reading that something like a gender-reassignment surgery can both be massive and minuscule, necessary and a choice, life-changing and shockingly day-to-day, without either side of ascribed values endangering the validity of the other. The piece ends:

You don’t have to go to the hospital.

While these final lines may at first appear to contradict this piece’s title and the later poem which discusses about the procedure’s results, I’d argue that they instead offer the reader an understanding that a body and a gender do not ultimately determine one another, that all cells are constantly up to interpretation and re-imagining, and that a lack of requirement in this instance does not have to delete or diminish a present desire. Amador is able to show us that a boy is a boy before both before and after a knife (or scissors).

“What Changed, Exactly” is the second-to-last poem of the book and revisits the idea that unknowing and inexactitude can be a possible site for a true sense of identity and meaning. The speaker describes a friend as being “alive/ in his own story/ and that story/ is not a book.” Once more, a lack of stillness, precision, and containment does not diminish, but in fact, reinforces a sense of life and personhood. The poem’s persona goes on to say “We’ve hardly ceased/ being ourselves./ We’re already new.” communicating both an understanding and a distinct inability to understand or keep track of one’s own humanity; the speaker knows they, and we all, are

moving, but where, how, and when are not decipherable until they can be read back later in recollection. The poem’s final stanza, as if in answer to its title, lands softly:

The mundane is a surprise here, but one the reader may have anticipated. We are shown again how the dramatic feeds into the day-to-day and vice versa, that sex, body, and gender may have relationships but do not answer one another concretely, and that living is a way of being unable to read and know yourself absolutely in every moment. In Nico Amador’s Flower Wars, the lines of poetry are full of flesh and voice, both of which are sure of their uncertainty and masterfully show the reader that, if we would trust an author to write their own poem, we should absolutely trust someone with reordering, preserving, mangling, and or perfecting the syllables of their own humanity. If you are a person and or a body, Flower Wars is relevant and vital reading.