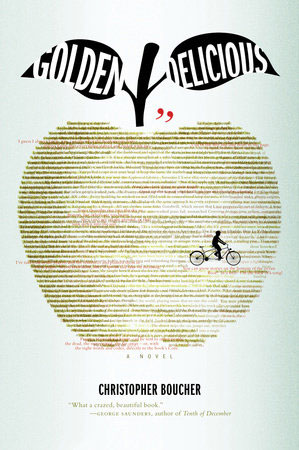 The best experimental fiction challenges the reader to think and feel in new kinds of ways but also invites her along for the journey. Christopher Boucher’s second novel, Golden Delicious, delivers partially on this promise. However, it reads like a literary experiment, more mathematical than artistic. Is it enjoyable? I can’t tell. Am I supposed to like it?

I flipped the pages, thinking of David Foster Wallace’s essay “E Unibus Pluram.” Persistent irony is tiresome, he says. “Sitting through a 300-page novel full of nothing but trendy sardonic exhaustion, one ends up feeling not only empty but somehow … oppressed.” Although I didn’t feel carved out, I did feel oppressed by the sheer volume of surreal cleverness in Golden Delicious. As I dug in, I experienced the unsettling sensation of reading a book that is smarter than I am.

Golden Delicious follows a fairly straight plot structure. (Thank God.) The novel’s a story of a family in Appleseed, Massachusetts, the kind of small town where apple-cheeked children frisk beside white picket fences, waving baseballs over the heads of leaping, barking terriers. It is, for lack of a better word, a wholesome place, a village that knows its own story too well to outgrow its roots. Here, history is literal. Sentences sprout from the soil, locals bear unusual names, and mothers practice their flight techniques. But under it, this is a simple story. The narrator, after his family takes to the four winds, sets out to save his town from hard times as its apple industry falters. Surreal elements rapidly swamp the story; I spent more time trying to figure out Boucher’s meticulous semantic codes than actually enjoying his writing.

“I was a badseed,” confesses the narrator, whose name is denoted as a long underscore. ______ says, “I just couldn’t be good, no matter how hard I tried. I remember, at six or so, making a trueheart sentence-gift for my Mom on the lawnpage.” Simultaneously alien and all too familiar, Golden Delicious is not an easy or particularly satisfying read. Yet, it’s hard to dismiss it. The novel is a prime example of postmodern writing; its academic approach to the genre softens its surrealism somewhat, but doesn’t necessarily make it easier to understand. How will I talk about this book? I wondered. I can’t even pronounce the main character’s name. After a few pages, I accepted my intellectual shortcomings and just let the sentences climb me like vines. “Ever since my days in Vox my thoughts had wandered,” says the narrator.

During the day, they’d open up the top of my head, slip off my ears, vault off my shoulders, and hop away; at night, they’d sleepthink without a bound, all through Appleseed: they’d roil out to the Hu Ke Lau, where ex-Cones sat at the bar husking regrets; jump the fence at the Appleseed Recycling Center to rummage through Memories; climb up Appleseed Mountain in the dark and get lost in paragraphs of wilderness; skateboard down Old Highway Five; vault forward into the future, back into the past, into the margin and beyond the what ifs: what might be, what could be, what should be but won’t. They’d bring back stories of their travels—adventures, struggles, strange characters and unnamed objects (machines that grew hair!, chatterglass!, an underground cone society!)—from places and worlds I never heard of. 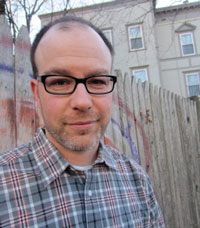 Still, all the climbing seems like a waste. I have a high tolerance for experimental fiction—seriously, try me. But for some reason, Golden Delicious left a bitter taste in my mouth. I just couldn’t get into it, and I felt bad, because clearly the novel has a lot going for it. I longed for the incisive writing of The Leftovers by Tom Perrotta, or even Aimee Bender’s dreamy magical realism. Boucher’s writing is so dense and immediate that it’s overwhelming: a massive frontload of cleverness, from page one, told me that I was in for it. This is not to diminish the craft of the novel. Boucher, who teaches writing and literature at Boston College, has a clear design in mind; the novel’s structure is deliberate, and even the looping sentences and lines of dialog feel carefully constructed. Am I simply too dumb to appreciate it?

Short answer: maybe. But it’s worth pointing out that novels like Golden Delicious weren’t necessarily written for people like me. It’s an envelope-pusher, a memorable read, and a lovely example of what’s possible in language. Consider:

Once, I was standing in line at the cafeteria when I struck up a conversation with someone who told me that he had three minds. He spoke three words at once, so I believed him.

“Does that mean you can think three thoughts at the same time?” I said.

This is the literary equivalent of a Chihuly garden: unique, delicate, surreal, and impressive. It is art, perhaps for art’s sake. If it’s over my head, I can assume that that’s because of a deficiency in me, its reader. Boucher’s first novel, How To Keep Your Volkswagon Alive, dealt with similar themes: fatherhood, regret, and loss while parenting a 1971 VW van. Golden Delicious is less playful, and maybe that’s what missing—the dig in the ribs that tells me that Boucher is having fun, too.

Putting Golden Delicious aside, I felt a little guilty for reaching for something a bit more pedestrian. After all that cleverness, I needed a palate cleanser. (Sorry.) Although Boucher’s writing shows immense promise, it might do better to focus less on its literary roots and influences and more on comprehensiveness of form. Maybe novel number three will bear sweeter fruit—as it is, Golden Delicious is too tart for this reader. (Not sorry.)