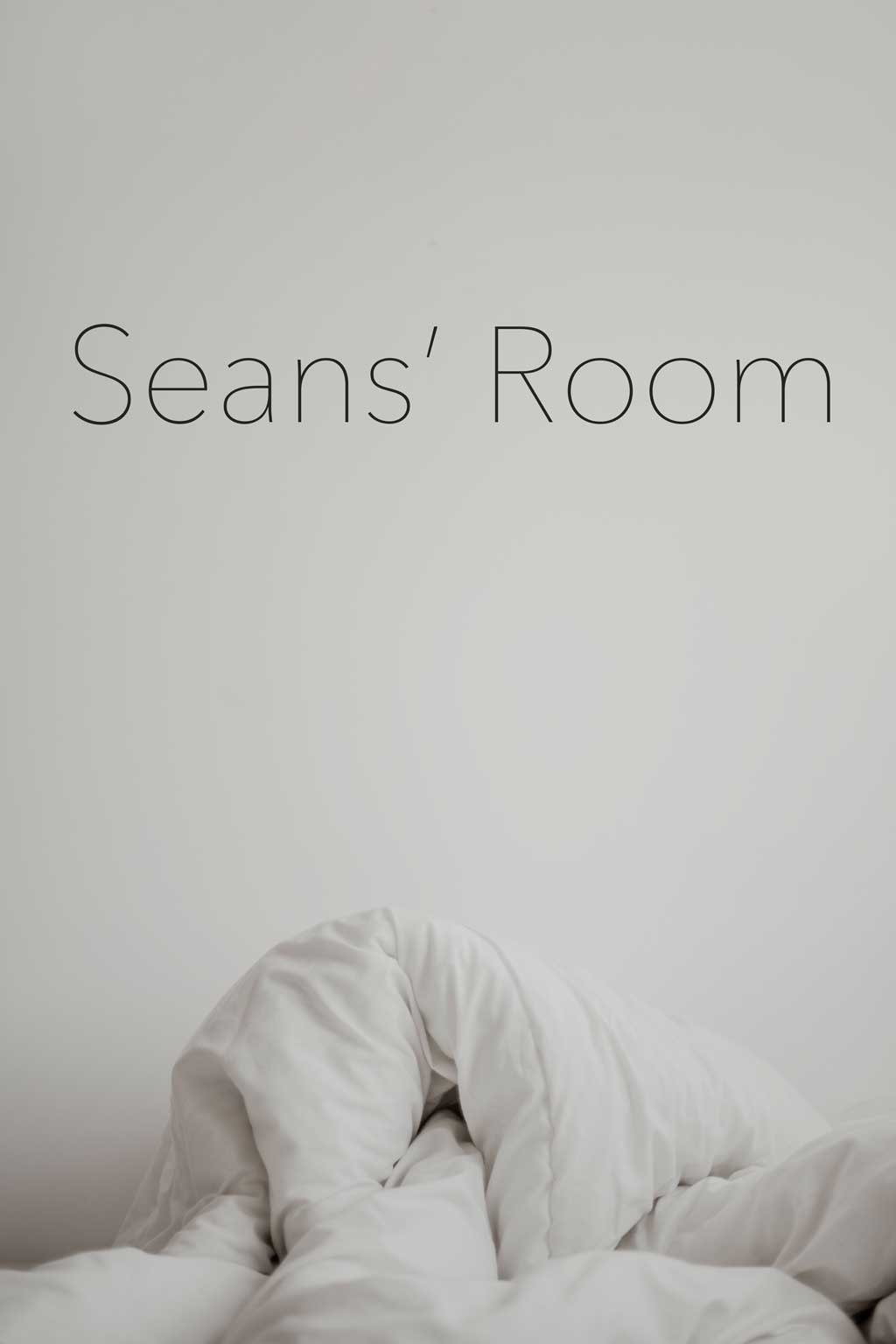 Steam from the shower moves in columns to the ceiling. I’m holding Sean’s hand, and his eyes close with the bathroom door—we twine and twist into sheets of flesh. Sean said the comedown is the hardest, but I’m still electric, can hear a crooning in the static of my fingers on his spine. It’s a slow dance with small movements, and the glow in my bloodstream says sway, so we make the steam vibrate in the small space. My fingers smooth water from the divots of his waist. The lazy warmth of him runs down my legs, floods the pale stucco floor. His curves, his hardness, his breath on my neck all feel ancient and half-remembered, and here I am, touching him for the first time again. We let the water run down the drain, dry off with a shared towel, and crawl under the duvet.

I wake first, watch the shuttered light play on his shoulders. The street outside is three floors down and a busy that bustles during rush hour. Sean was lucky with his room assignment—a queen size bed (instead of the standard twin), and nearly twice as much floor space as his flatmates. We’re both Americans studying for a semester at King’s College, and since my apartment is a half-hour’s walk to Waterloo, most of my nights are spent at his place.

Sean stirs in his sleep, and I bring my arm around his back. I know soon we’ll both rise and get ready for class, but for now, the morning is draped around us, and I’m hard against his back. He stirs again. My eyes drift over his shoulder to the billboard and his newspaper clippings, a smattering of headlines and monochrome stills: Theresa May and Donald Trump in a sombrero, Kim Jong-un playing Xbox with Hillary Clinton. At the start of the semester, Sean had started pinning clippings and funny headlines to the billboard over his desk, a collage of the world formed during his semester abroad. It was one of the first things I noticed when I came home with him the first time, and it caught my eye now, with the comedown kicking in and his hips grinding against my hard-on.

“Morning,” he says, turning on his side. “How you feeling?”

“Great, actually. Coming down still. You?”

“Good.” He plants his lips on mine and I can feel him smiling. I kiss his cheek, his jawline, play his nipples between my teeth before kissing down his navel. The window light casts bright bars on his erection, and the mattress gives a bit under my palms as I take him in my mouth. The sheets and duvet are bundled on my side of the bed, and the sex is quiet and liquid—soft moans, a laugh and breath between positions.

Sean and I met on Tinder a couple weeks earlier, made plans to grab drinks at a pub filled with retro American arcade games. I was on antibiotics for gingivitis, and he was just recovering from a gastrointestinal infection, so very little drinking was done, but the date ended at his place with us having sex to Frank Ocean, and I stayed there most nights after.

Last night, though, was the first time I’d tried ecstasy. Half a pill half an hour before the club, the other half right before entering. Sean had done it a handful of times, said he’d guide me through it. We took the tube to Old Street, popped the second half of each pill on Cowper Street in the line at Club XOYO. Sean had told me what to expect: the euphoria, the tension in the jaw, buzzing in the joints—and I’d done my own research.

A few minutes after we walked in, I started to feel it.

“Hey, Sean?” The club was only starting to fill with people, and we were still on the top floor, dancing to the thump of the bass below.

“You know how you were talking about M-Dick?” He’d told me earlier that night that most people can’t get it up when rolling, a variation of whiskey-dick. But, on the rare occasion, MDMA can do exactly the opposite—orgasm from the slightest touch.

“I, uh, definitely don’t think I get M-Dick.” I was pretty sure it was just precum wetting my boxers. Pretty sure. Sean moved his shoulders back, looked down at our hips locked together.

Now the club was coming alive. I pulled him onto one of the empty couches. We started dancing on the back of it. “You’re feeling it now.”

Oh, I was feeling it. I didn’t know my hips could move like that, watching them jerk and move so loosely, so freely. Usually, when dancing, my arms move in strange, grasping circles over my head like a drugged, drowning shipwreck survivor. But there, on top of that couch in a nearly empty room—still flailing like a drowning victim—I was enjoying it!

“Wanna go downstairs?” Sean in my ear. Oh man, did he feel good to touch. Wherever he was going, I wanted to go. The gum was a good idea. The lockjaw was kicking in, and the rhythm and cushion of the chewing gum was like a feverish game.

Downstairs, the heartbeat of the thudding dance floor sent mine racing. Somewhere on the stairs, we’d run into a couple of Sean’s friends, and soon we were all on the stage at the front of the club.

“How’d we get here?” I shouted across the couple feet between me and Sean. He smiled and blinked and kept dancing–couldn’t hear a word I said. I leaned into his ear to repeat myself, but instead I kissed it, and said, “This is great, man!” He nodded again.

I didn’t expect the high to be so clear. Instead of the lazy high of weed leaving everything hazy and warm, the ecstasy turned everything sharp and flowing, like sculpted glass. The club full of red and blue light, the white of the strobe, the purple of Sean’s shadow pounded into my chest, and we could have stayed like that for hours—rolling walls, connective tissue, this man I loved melting into my bloodstream.

We left the club at 3AM, caught a bus, made a second dinner of Nutella sandwiches, and slid into the shower. The MDMA smoothed out my clumsy self-consciousness but left me conscious of everything. Of the water, of Sean’s curving shoulder blades, of the simple joy of feeling connected. It was a moment of life made vibrant, and we stayed in that shower until the water grew tepid.

The next evening: the comedown. I’m writing a paper, and vertigo is playing through my mind in a panicked spiral. My pupils are arrow slits through which painful spears of light are thrown. I delayed it with a nap and coffee earlier, but this evening the dull roar has become a panic attack in my chest. I expected a painful hangover, but this is a hangover from hell, injected with steroids and anxiety.

Sean sits across from me at the library table. His highs and comedowns are always milder than mine, whatever the drug. I don’t want to let on that there’s a war zone ripping through me, so I take slow, deep breaths.

“How you feeling?” I ask with what I hope is nonchalance. “How was the comedown?”

“Not bad at all. It just hit me a little earlier today.” His eyes drift up from his laptop, calm and blue and watching me. “How are you?”

“Yeah, fine. Fine.” My mind was traveling elsewhere, unhinged from the nervous energy gnawing at my legs. Funny, the bundle of anxiety binding my chest shut and my brain murky and stagnant as a choked pond. I reach for Sean’s hand. “Just on edge, I think.”

Later, I would tell him about the panic I felt, after the attack had passed. That’s how I handle things, in the moment—I wait for them to pass like a specter that I’m afraid naming will strengthen.

I don’t know if he understands that, if I do myself, but he holds my hand anyway. The memory of his comfort is stronger than the comfort itself. His lips tighten in a smile, and I do feel better—holding his fingers still holding a buzz. 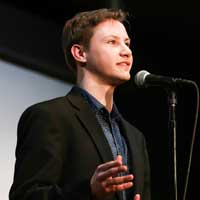 Blake London’s work has appeared in Euphony Journal, Red Cedar Review, and eFiction Magazine. In 2013, Blake was the recipient of the Wyoming Young Authors Prize in Poetry, and he currently performs spoken word poetry with The Excelano Project. Originally from Gillette, Wyoming, Blake London is a recent graduate of the University of Pennsylvania and resides in Philadelphia.