DEAR FAMILY AND FRIENDS
A Visual Narrative About Depression
by William J. Doan

Depression is a wiley adversary. Those fortunate not to know what it’s like to exist in this dark realm can’t grasp its life-sucking grip. Those afflicted are told, “ You look fine,” or “You have nothing to be depressed about. Your life is good.” But to read Bill Doan’s visual narrative Dear Family and Friends, an intimate, heartfelt account of coping strategies, is to viscerally feel what it’s like to live under the leaden sky of anxiety and depression. In a series of mostly black-and-white self portraits done in ink, Doan’s visage morphs wildly in expression and mode as he writes a letter, in elegant script, explaining how one can look outwardly fine while inwardly struggling on a minute-by-minute basis with crippling depression. Doan’s letter lifts the veil on a shrouded topic that is often spoken about yet still widely misunderstood. “Dear Family and Friends” is part of the rapidly emerging genre known as Graphic and Narrative Medicine, which combines words and images to relate personal experience with illness. Doan is a professor of theatre in the College of Arts and Architecture and artist-in-residence for the College of Nursing at The Pennsylvania State University. He will serve as the Penn State Laureate for 2019-2020. I’m am so pleased to present Bill Doan’s work in my maiden voyage as Graphic Narrative Editor for Cleaver Magazine.
—Emily Steinberg, Editor
Philadelphia, September 2019 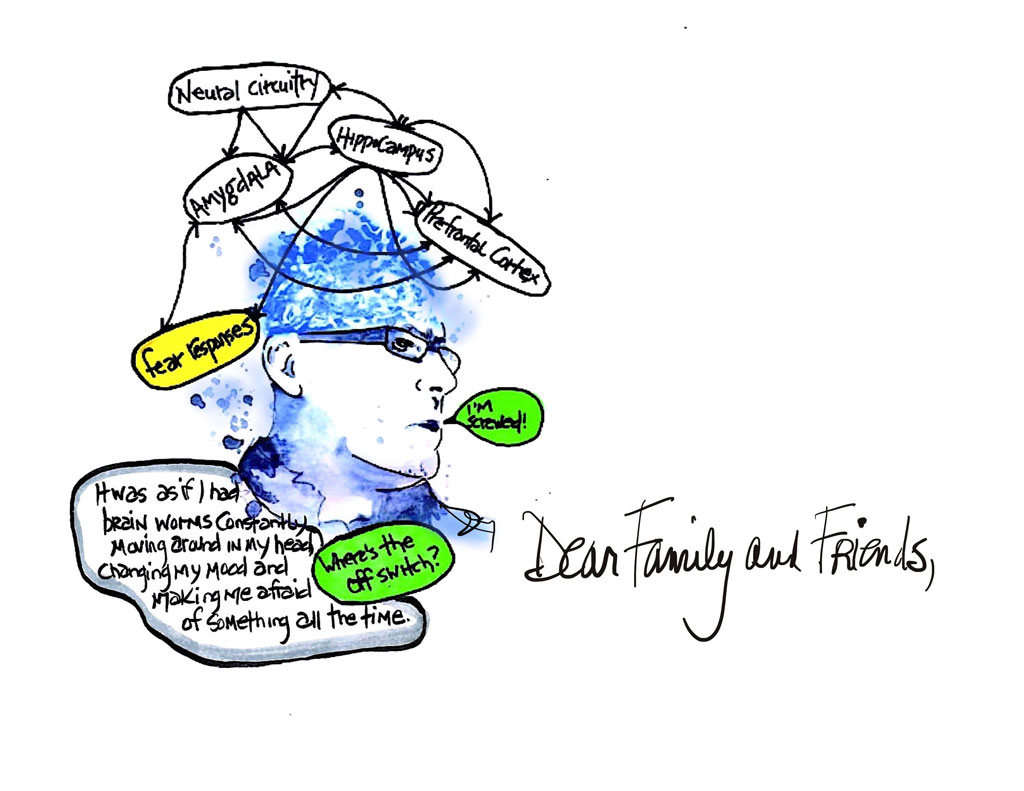 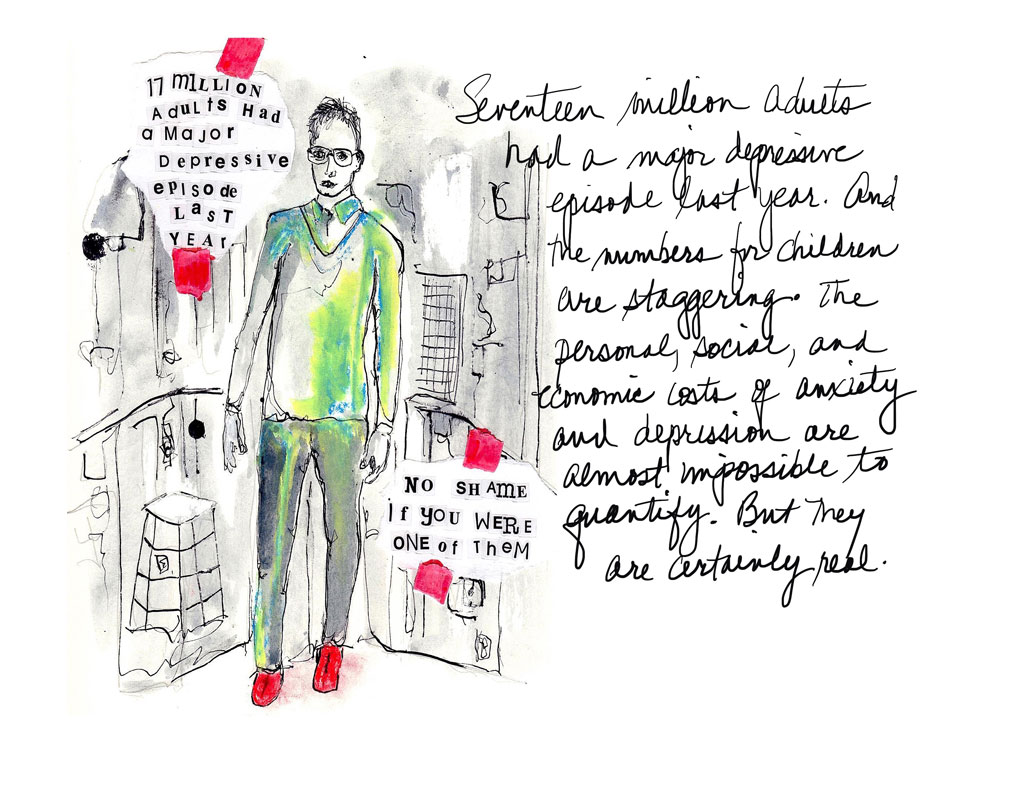 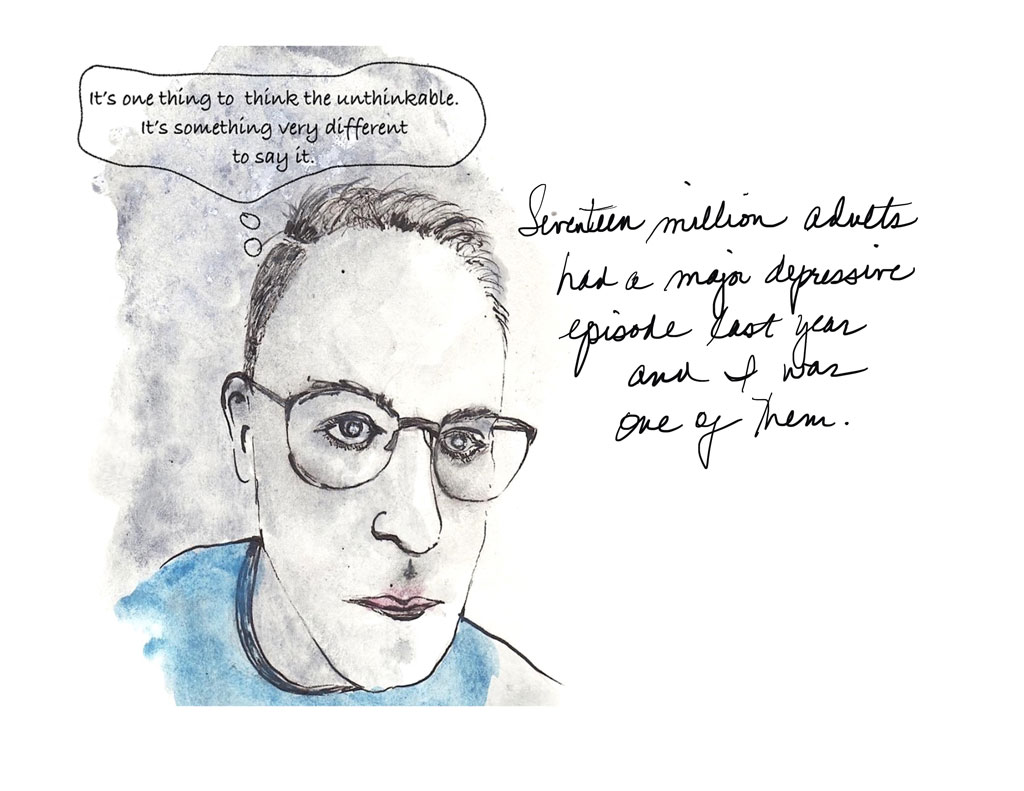 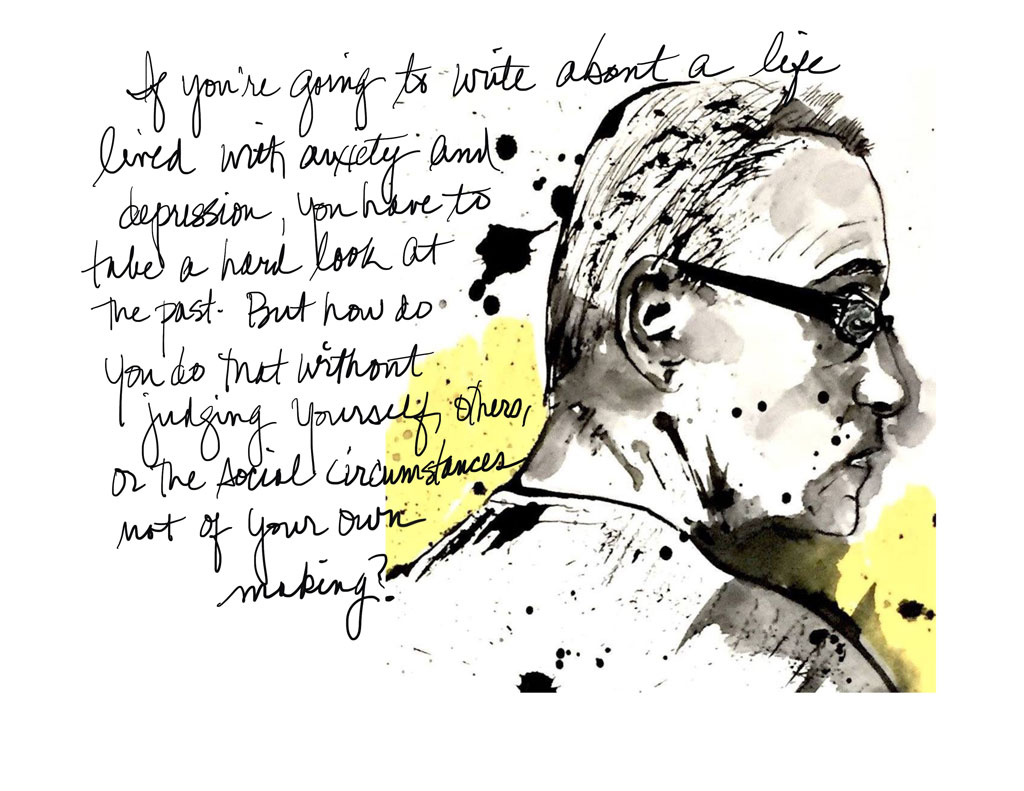 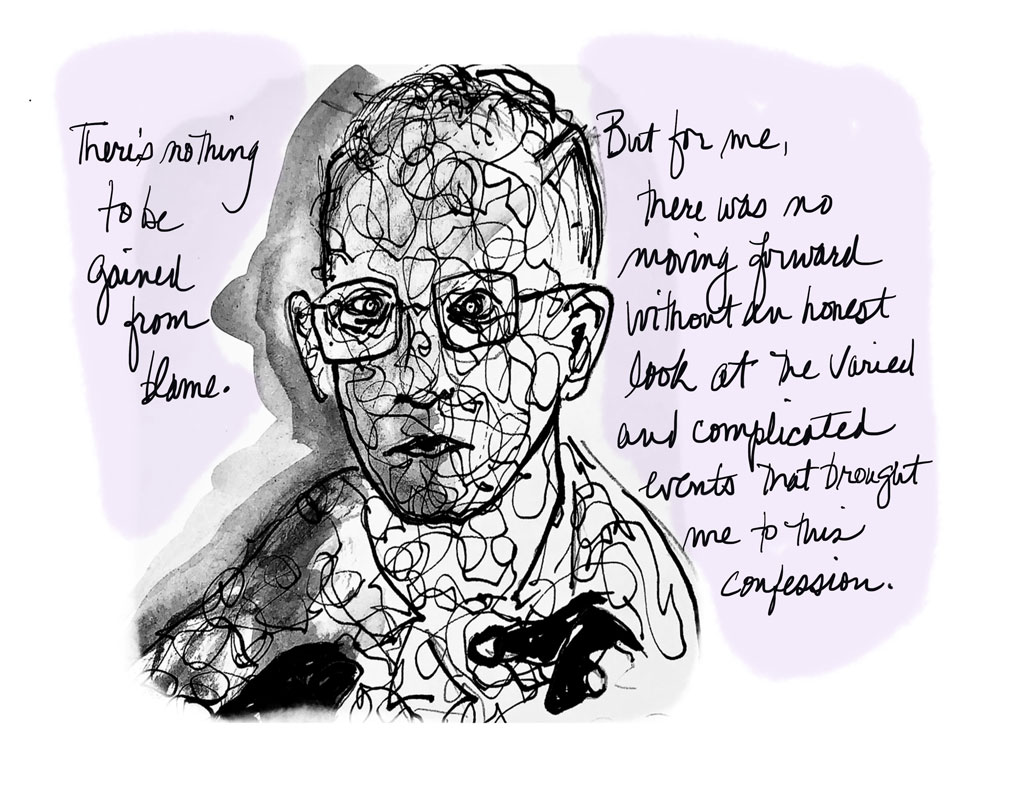 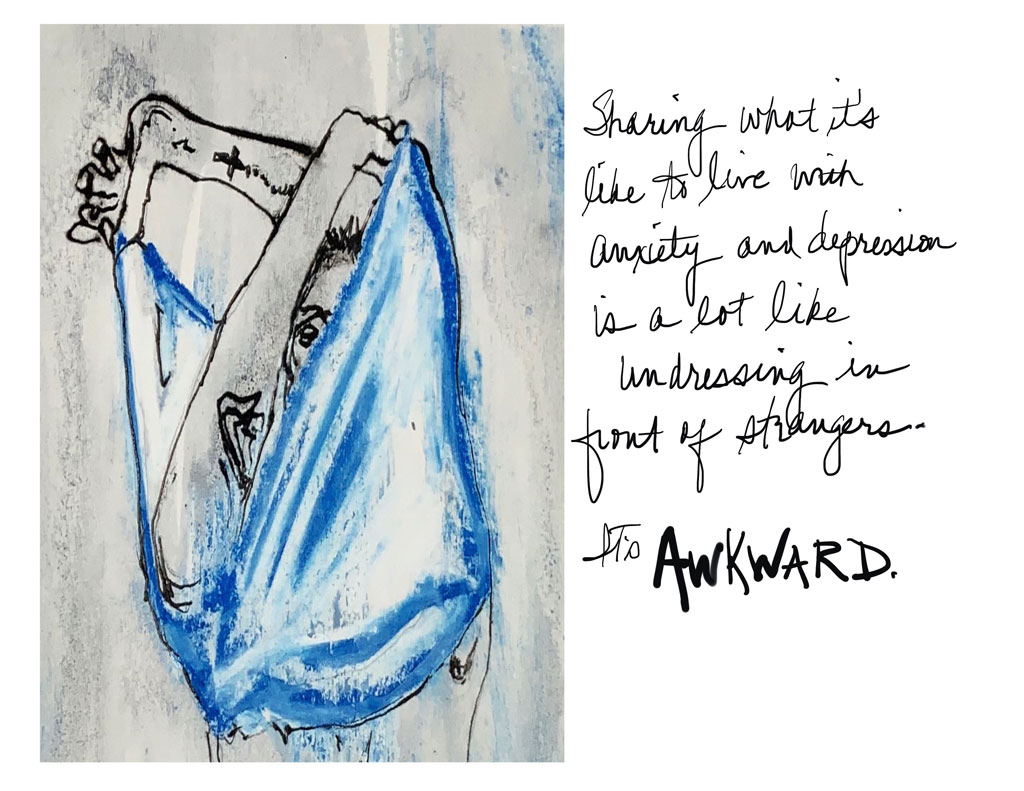 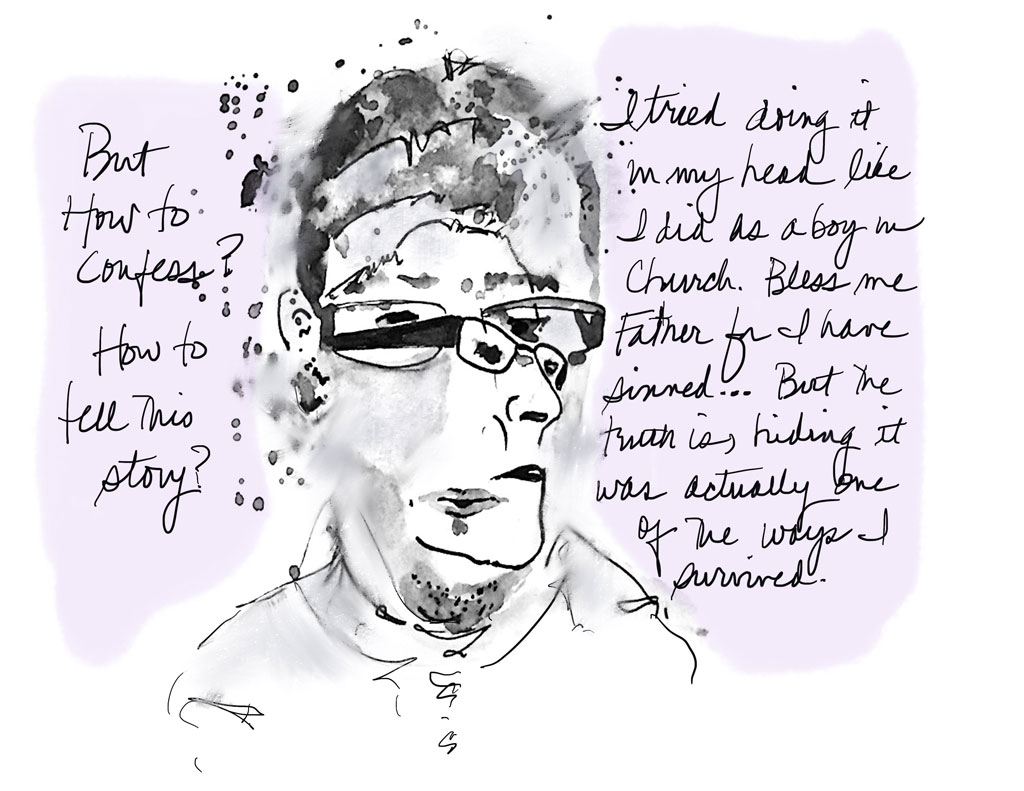 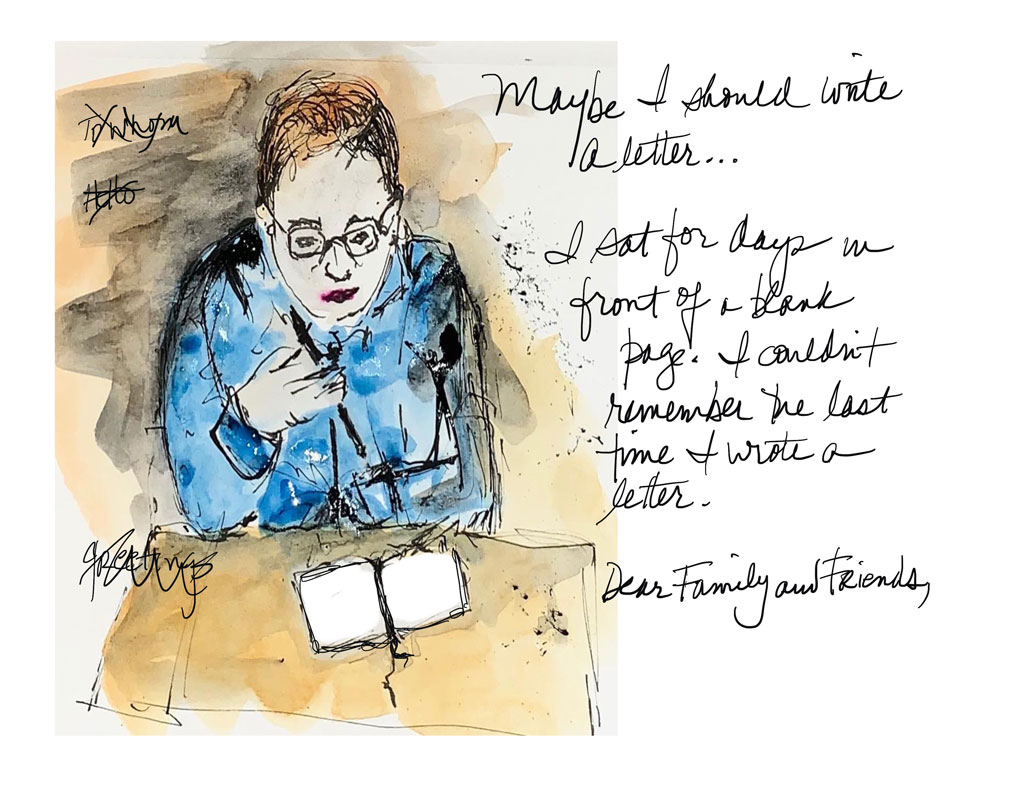 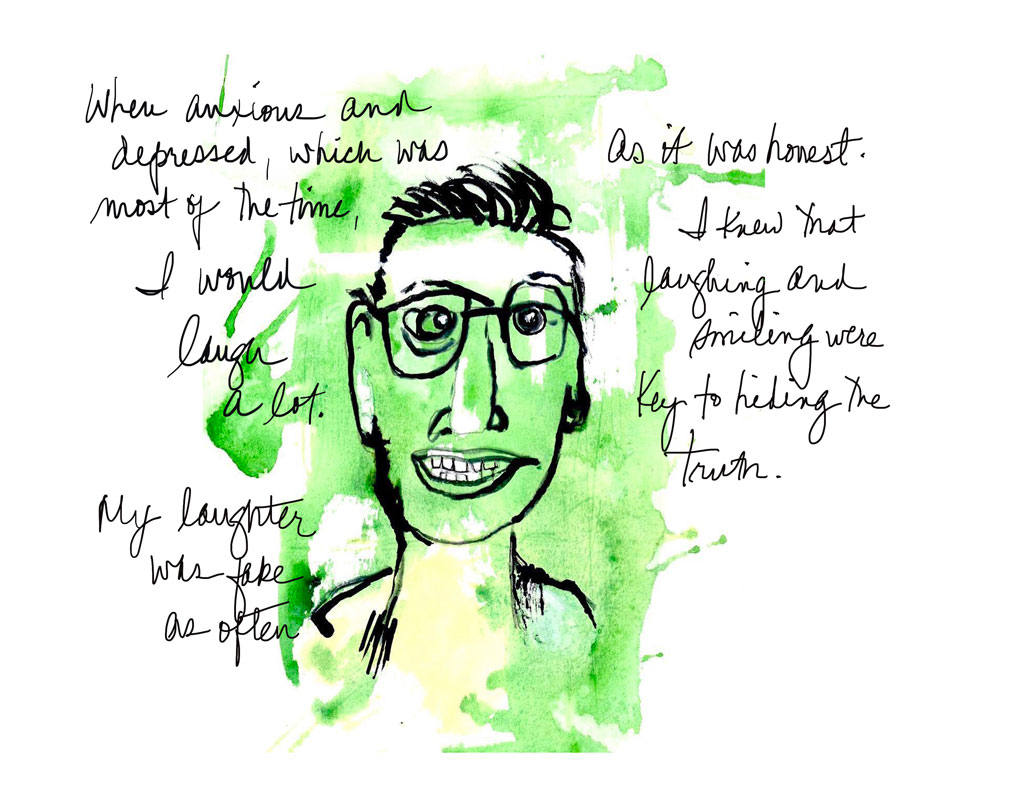 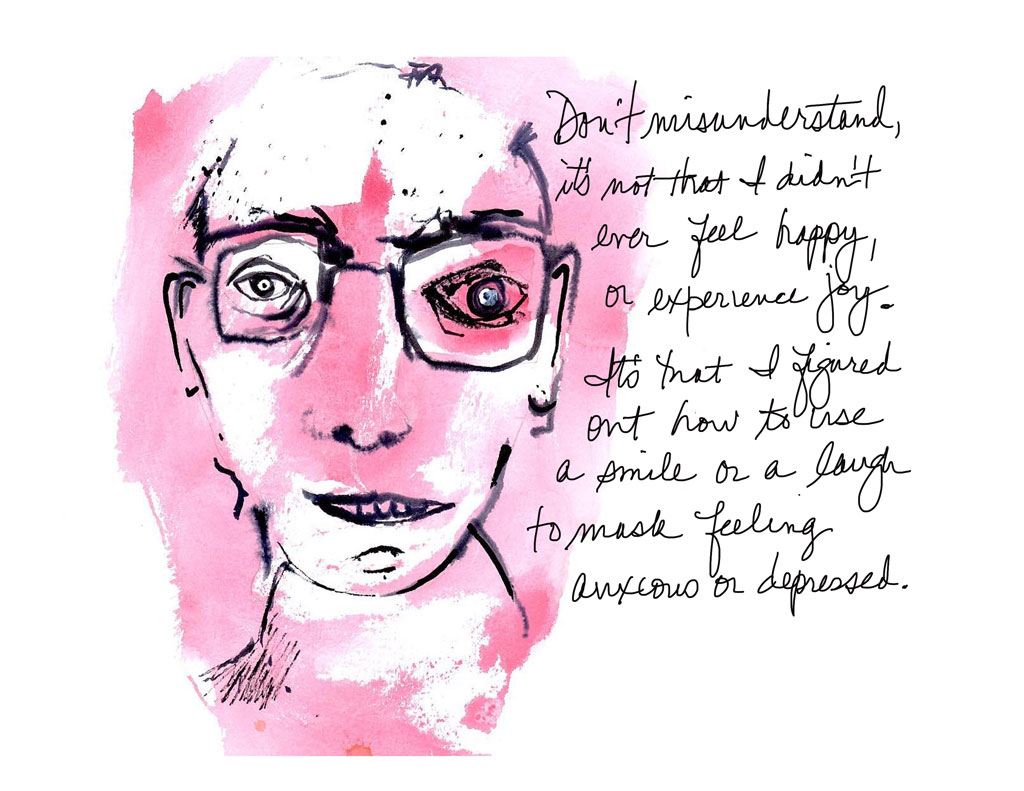 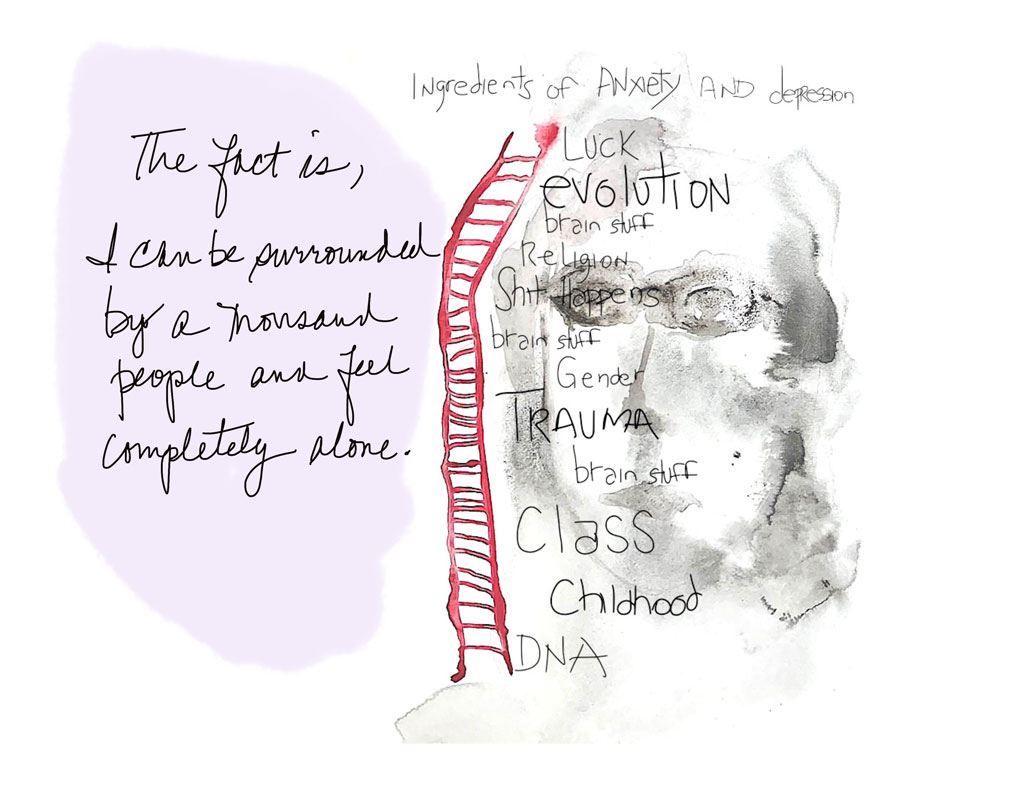 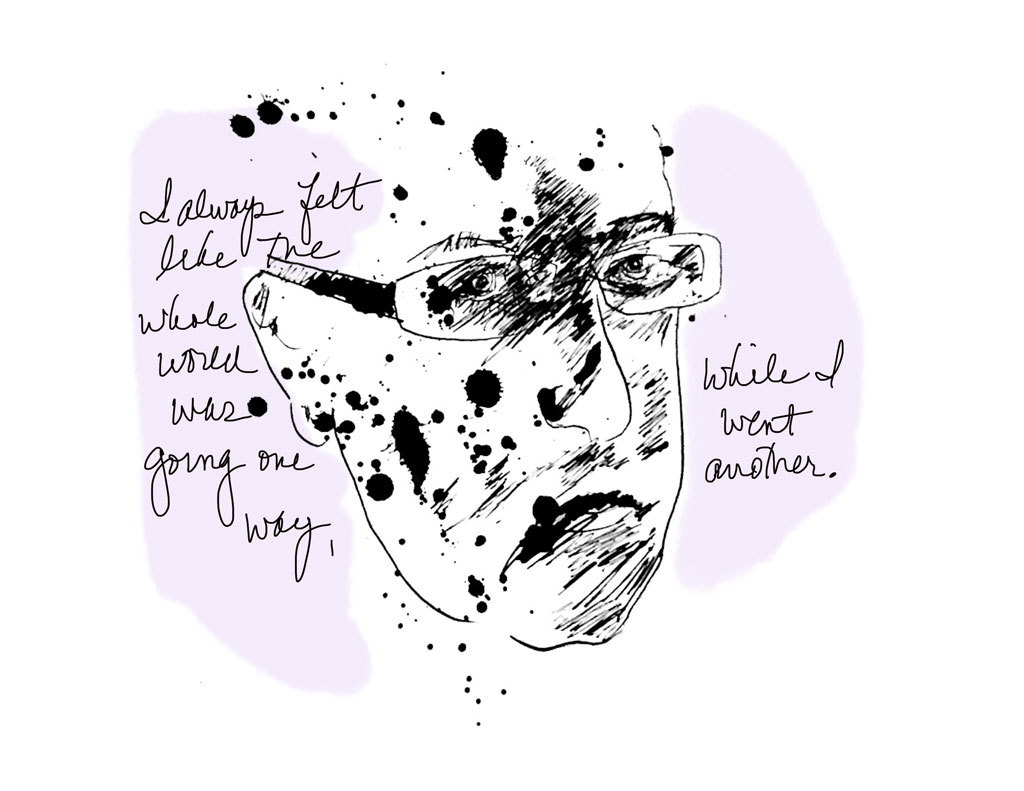 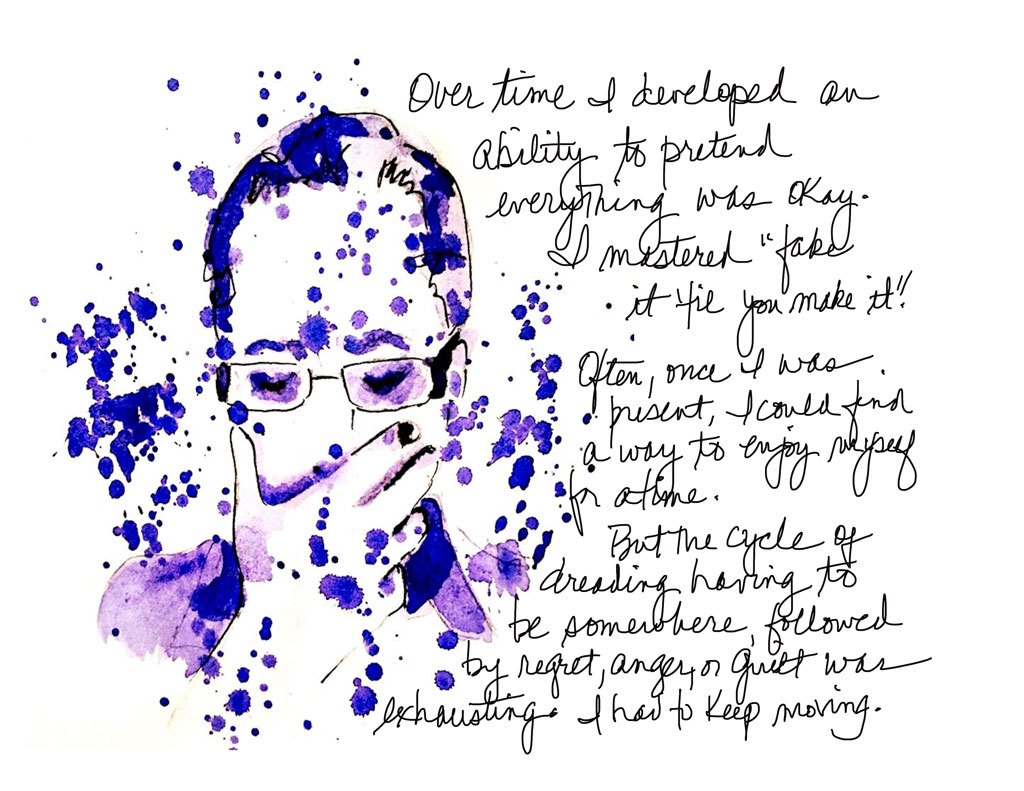 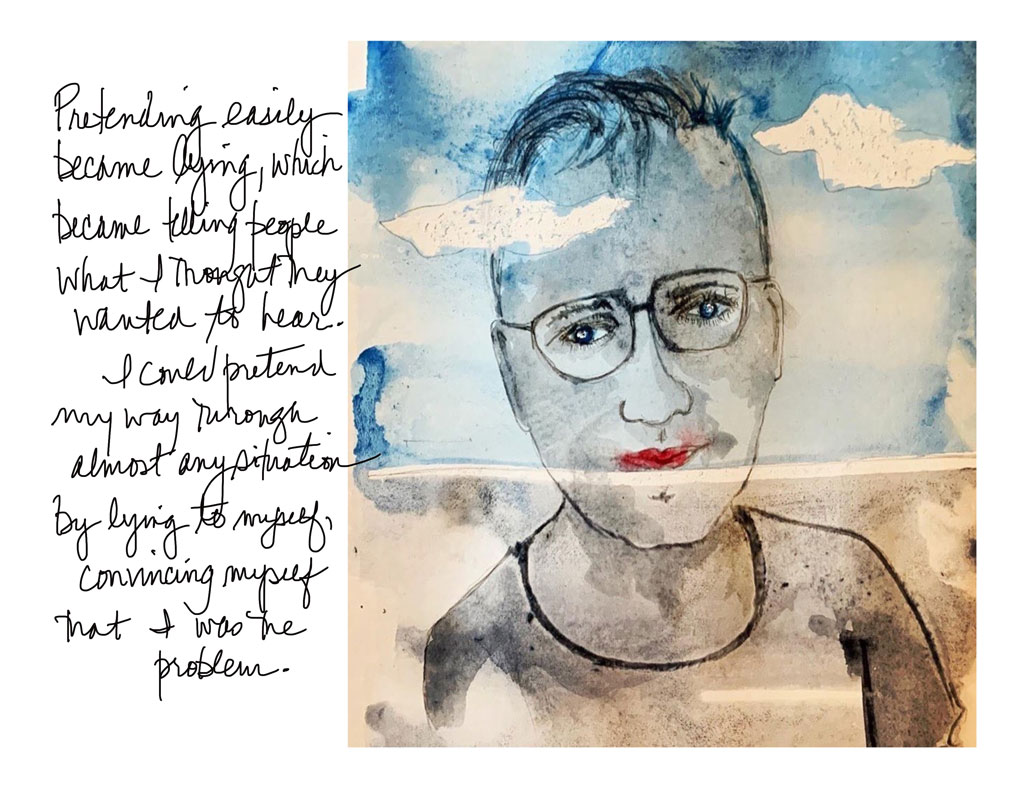 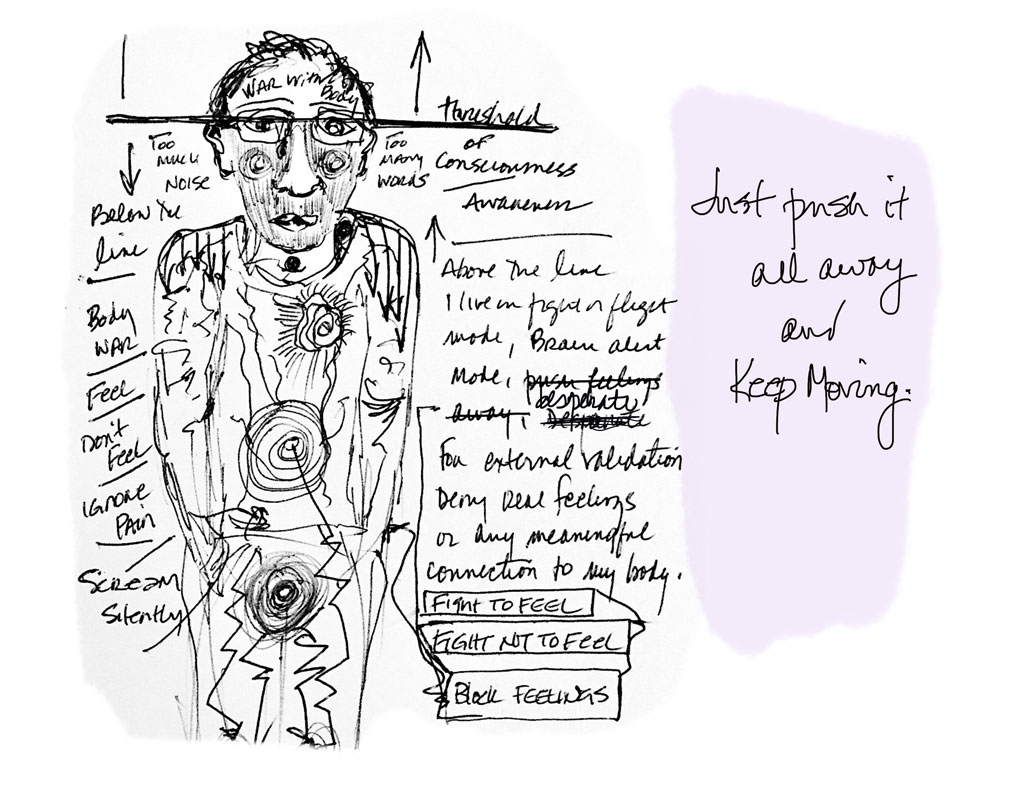 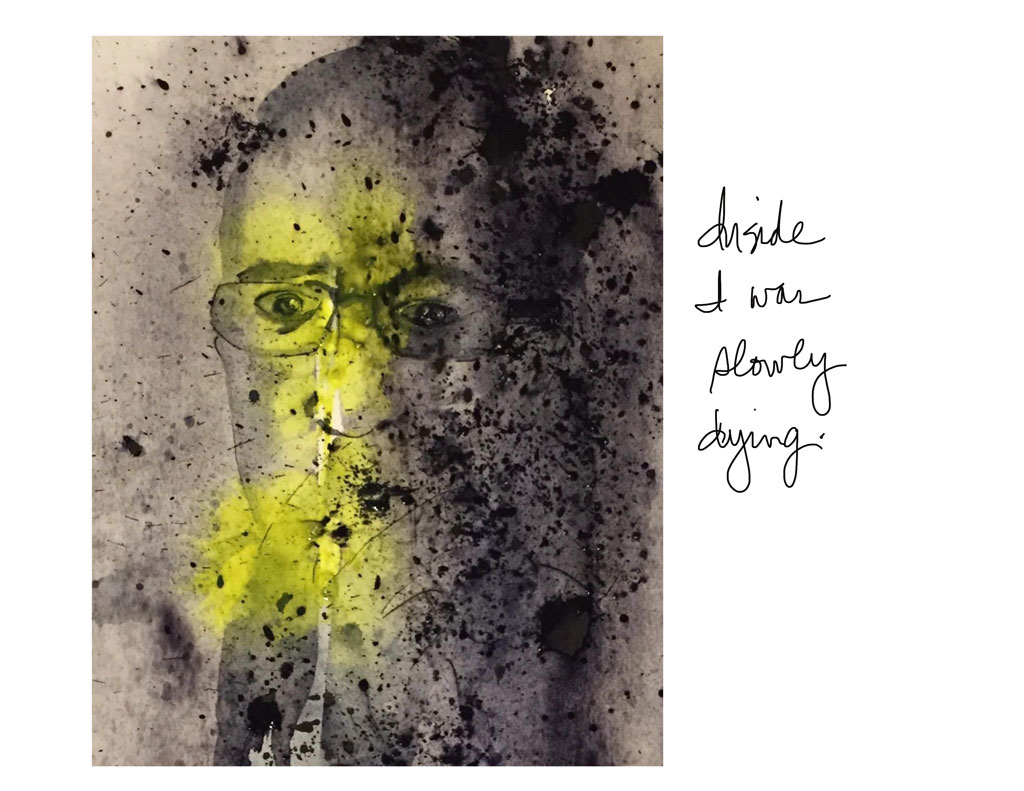 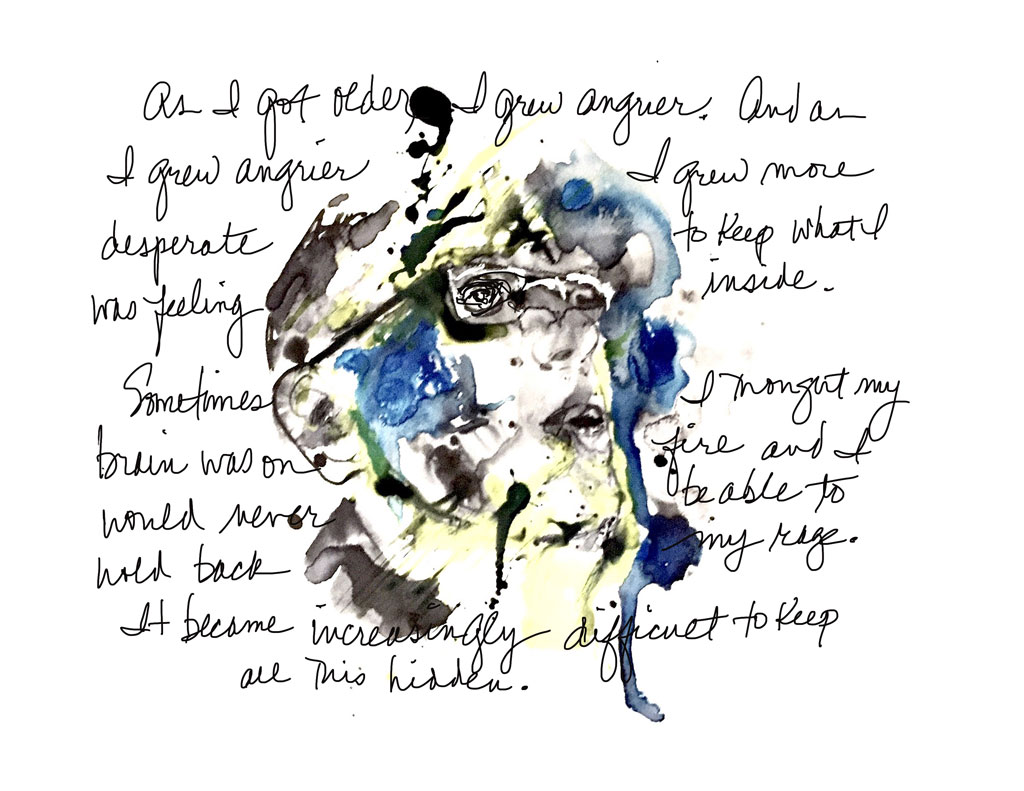 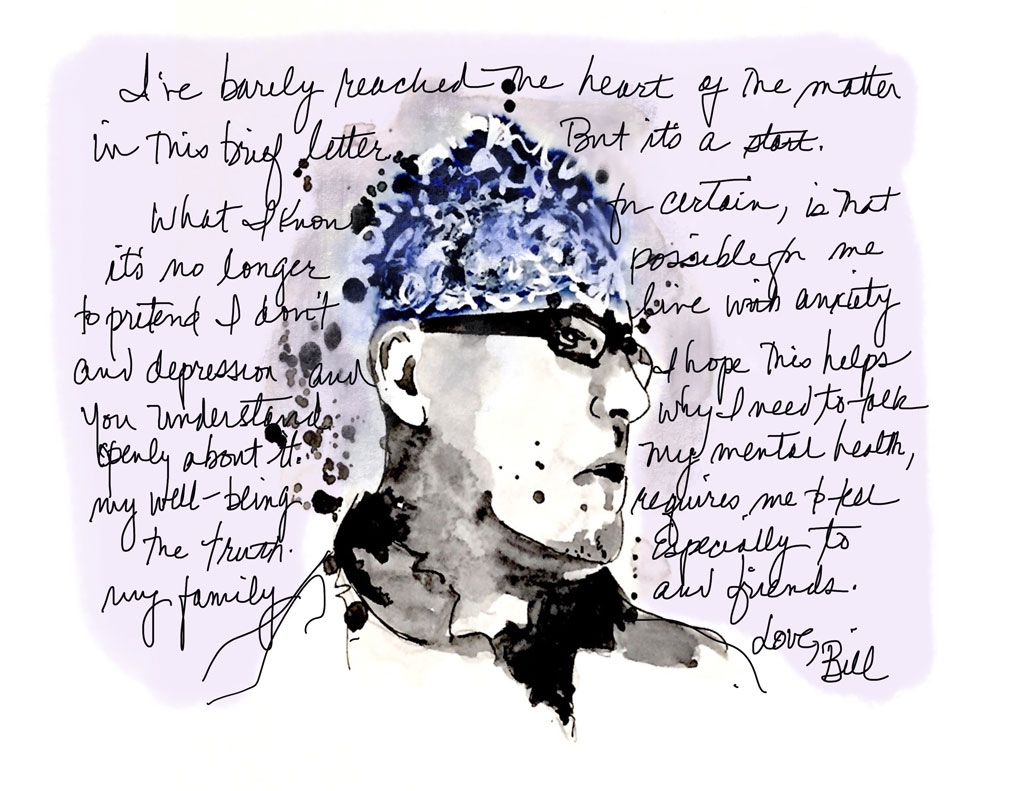 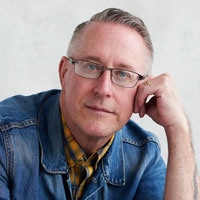 William J. Doan, Ph.D. is a past president of the Association for Theatre in Higher Education and a Fellow in the College of Fellows of The American Theatre. In addition to articles in scholarly journals, Doan has co-authored three books and several plays. He has created solo performance projects at a variety of venues across the U.S., and abroad. His current work includes a new performance piece, Frozen In The Toilet Paper Aisle of Life, part of a larger project titled The Anxiety Project. Work from this project includes multiple short graphic narratives published in the Annals of Internal Medicine/Graphic Medicine. He is a Professor of Theatre in the College of Arts and Architecture and Artist-in-Residence for the College of Nursing at The Pennsylvania State University. Doan will serve as the Penn State Laureate for 2019-2020.

Text for Dear Family and Friends

Panel One: Dear Friends and Family. Text bubbles around the figure read from left to right: 1. It was as if I had brain worms constantly moving around in my head. Changing my mood and making me feel afraid of something all the time. 2. Fear responses. 3. Amygdala 4. Neural Circuitry. 5. Hippocampus 6. Prefrontal Cortex 7. I’m screwed 8. Where’s the off switch?

Panel Three: Seventeen million adults had a major depressive episode last year and I was one of them. Text bubble in image: It’s one thing to think the unthinkable. It’s something very different to say it.

Panel Four: If you’re going to write about a life lived with anxiety and depression, you have to take a hard look at the past. But how do you do that without judging yourself, others, or all the social circumstances not of your own making? There’s nothing to be gained from blame. But there’s no moving forward without an honest look at the varied and complicated events that brought me to this confession.

Panel Five: There’s nothing to be gained from blame. But for me, there was no moving forward without an honest look at the varied and complicated events that brought me to this confession.

Panel Six: Sharing what it’s like to live with anxiety and depression is like undressing in front of strangers. It’s awkward, and I’m sure I’ll get tangled up, stumble, and fall into something.

Panel Seven: But how to confess, how to tell this story? I tried doing it in my head like I did as a boy in church, bless me father for I have sinned… But the fact is, hiding it was actually one of the ways I survived.

Panel Eight: Maybe I should try a letter. I sat for days in front of a blank page. I couldn’t remember the last time I wrote a letter. Dear Family and Friends.

Panel Nine: When anxious and depressed, which was most of the time, I would laugh a lot. My laughter was fake as often as it was honest. I knew that laughing and smiling were key to hiding the truth.

Panel Ten: Don’t’ misunderstand, it’s not that I didn’t feel happy, or experience joy. It’s that I figured out how to use a smile of a laugh to mask feeling anxious or depressed.

Panel Eleven: The fact is I can be surrounded by a thousand people and feel completely alone. Text inside the image from top to bottom: Ingredients of Anxiety and Depression, Luck, Evolution, Brain Stuff, Shit Happens, Brain Stuff, Gender, Trauma, Brain Stuff, Class, Childhood, DNA.

Panel Twelve: I always felt like the whole world was going one way while I went another. I laughed it off as often as I could.

Panel Thirteen: Over time I developed an advance ability to pretend everything was OK. This made it possible to show up for social events, work, whatever was required. I mastered “fake it til you make it.” Often, once I was present, I could find a way to enjoy myself for a time. But the cycle of dreading having to be somewhere, followed by regret, anger, or feeling guilty was exhausting. I just knew I had to keep moving.

Panel Fourteen: Pretending easily became lying, which became telling people what I thought they wanted to hear. I could pretend my way through almost any situation by lying to myself, convincing myself that I was the problem.

Panel Fifteen: Just push it away and keep moving. Text inside the image: series of words about being above and below the threshold of awareness, fighting feelings, blocking feelings.

Panel Sixteen: Inside I was slowly dying.

Panel Seventeen: As I got older, I grew angrier. And as I grew angrier I grew desperate to keep what I was feeling inside. Sometimes I thought my brain was on fire and I would never be able to hold back my rage. It became increasingly difficult to keep all this hidden.

Panel Eighteen: I’ve barely reached the heart of the matter in this brief letter. But it’s a start. What I know for certain is that it’s no longer possible for me to pretend I don’t live with anxiety and depression and I hope this helps you understand why I need to talk openly about it. My mental health, my well-being requires me to tell the truth. Especially to my family and friends.